Several museums around the Baltic Sea have produced exhibitions that can be lent to other museums, municipalities, organizations, institutions or anyone who has room for an exhibition.

Practical and financial details, along with the content of the exhibitions, can be found in the attached descriptions.

The Genocide and Resistance Research Centre of Lithuania

The exhibition shows how Lithuanian basketball teams sprang up in the Soviet labour camps and places of exile in the 1950s. The material is arranged geographically– different stands exhibit photographs from the Komi, Mordovia, Kazakhstan, Omsk, Irkutsk and other regions. The exhibition comprises 13 stands and the text is both in Lithuanian and English.

The exhibition was first opened on 24 August 2011, immediately before the opening of the European basketball championship. It was later exhibited in other cities in Lithuania.

Photo from the exhibition: An important foul. Chuna, Irkutsk Region, 1956. Photo: The Genocide and Resistance Research Centre of Lithuania.

Flix, one of the best comic strip artists in Germany, asked himself and his friends what they remember when they think back to the days when Germany was still divided. A colourful comic book series came out of their answers: “There was something …”. Each episode tells the story of the division of Germany from a different, personal perspective. Memories here and there, in communist East Germany and democratic West Germany, in dictatorship and democracy.

The main aim of this exhibition is to chronologically present the final stages of communism in central-eastern Europe.

The title paraphrases the words of the British historian Timothy Garton Ash, as expressed to Vaclav Havel on 23 November 1989, during the 7th day of the ‘velvet revolution’ in Prague. He had in mind a kind of ‘domino effect’, apparent during the liberation from Soviet rule of the Central-Eastern Europe countries. The exhibition begins with a poster, a picture taken on 4 June 2009 showing Lech Walęsa toppling the first oversized red domino symbolising the fall of communism across Europe. This event took place in the Gdansk Shipyard during the 20th anniversary of the first partially-free elections in Poland.

This exhibition documents the international circumstances behind the loss of Lithuania’s independence, the beginning of the country’s repression and Sovietization, and the tragedy of black June, when in a matter of days approximately 18,000 citizens were deported from Lithuania to the remotest regions of the Soviet Union.

Photo from the exhibition:
A disappearing cemetery for Lithuanian deportees in Bykov. Yakutia, 1957.

>> FROM PEACEFUL REVOLUTION TO GERMAN UNITY

2009/2010 was the 20th anniversary of the peaceful revolution and reunification of Germany. This exhibition focuses on the events that occurred at that time. It includes, for example, the protests at the falsification of the East German elections, the movement of refugees and the mass protests that forced the SED dictatorship to its knees. The exhibition explains, among other things, the German-German solidarity and the foreign policy choices involved in restoring German unity.

The GULAG exhibition presents documentary photographs from archives and private collections, as well as photographs of vanishing traces of “camp civilization” that have been left on the post-Soviet Russian landscapes.

Photo from the exhibition:
The Dead Road. 1947-1953. Prisoners constructing a railroad across the tundra, 1947. The Great Northern Railroad or “The Dead Road”, built by 70,000 prisoners, was supposed to run 1,500 km through Siberia along the Arctic Circle. Two weeks after Stalin’s funeral the project was halted as pointless. By that time, almost 900 km had already been constructed. Its construction ended in a total fiasco. Author unknown. Still photo from a film. Rights reserved by Tomasz Kizny Collection.

This travelling exhibition is the first in Germany to present relics of and testimonies to the Soviet camp system collected by the “Memorial” human rights organization all over the former Soviet Union from the 1980s to the present. Objects from the “Memorial” holdings – for example a makeshift bread pouch, a tattered dress or a metal grave tag – make the everyday lives of the camp inmates tangible.

Photo from the exhibition: At the center of the entrance area to the exhibition is a model of Vladimir Tatlin’s design for the “Monument to the Third Communist International”. A cosmic-planetary order, the Bolshevist Revolution and the new political world order have been made to harmonize here, at least aesthetically. Photo: Claus Bach.

>> ROADS TO FREEDOM. EUROPE VIA SOLIDARITY

Solidarity Centre Foundation, Gdansk, Poland. The main idea behind this exhibition is to present a multifaceted story, considering the modern history of Poland as well as the phenomenon of Solidarity portrayed against the backdrop of the most significant European events. The exhibition takes the viewer on a chronological journey, beginning in 1945, towards a certain goal. This goal is an invitation to visit Poland – a country of critical historical importance, and Gdansk – the city where the downfall of the Communist regime began.

Photo from the exhibition: The BHP hall at the Lenin Shipyard in Gdansk, August 1980.

This exhibition, entitled Solidarity of Nations, is a large-format presentation thr purpose of which is to impart the idea of Polish Solidarity across regions as a global concept that managed to encompass many countries. The exhibition shows that the Polish victory in 1980 and 1989 was easier because they chose the path of peaceful dialogue, the personal partnership of many nations, and that common aspirations can be the source of political and historical success on a global scale.

>> THE IDEAL WORLD OF A DICTATORSHIP? RULES AND EVERYDAY LIFE IN COMMUNIST EAST GERMANY

What was communist East Germany or the DDR like? This issue is coming under increasing discussion. In 1989, just before the fall of the Berlin Wall, the answer seemed clear: by then, hundreds of thousands had perished on the streets in demonstrations against the Communist dictatorship. People were demonstrating for the freedom to travel and for better living conditions. Today, life in East Germany is often glorified. Was there an “ideal world” inside the dictatorship? Were the Communist rules of dictatorship reflected in everyday life?

>> THE WALL. A BORDER THROUGH GERMANY

The exhibition includes impressive photos and documents from the archives of the two newspapers, some of which have never before been shown, describing the Communist border regime and its victims, the attitude of the Western powers to the Wall, escapes and escape assistance, daily life along the German border and in the divided city of Berlin, as well as the happy ending of the division with the peaceful revolution of 1989.

>> UNDER THE ALIEN SKIES: LITHUANIAN PEOPLE IN SOVIET HARD LABOUR CAMPS AND EXILE IN 1940–1958

The exhibition was prepared in 2011 in order to commemorate the Year of Remembrance of Defence of Freedom and Great Losses in Lithuania. The aim of the exhibition was to inform Western European citizens, especially the younger generation, about the crimes of the Soviet totalitarian regime, i.e. the deportations of Lithuanians and their imprisonment in labour camps. Another important reason for the exhibition was to pay tribute to Lithuanians who suffered the atrocities of exile and labour camps. It also serves as a commemoration to those who did not return.

Photo from the exhibition: Political prisoners working in a mine in Inta. Komi ASSR (1954). Photo: The Genocide and Resistance Research Centre of Lithuania

This exhibition deals with the partisan war in Lithuania after the Second World War, when the country was occupied by Soviet troops. This partisan war was more or less unknown in the West.

Photo from the exhibition: 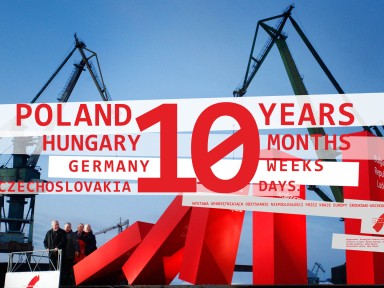