Armed anti-Soviet Resistance in Lithuania in 1944-1953

Owner of the exhibition:

The exhibition is in Lithuanian and English. Stands providing translation into other languages can be placed near each stand – see the photo.

The borrowers must pay transportation costs and all other expenditures related to translation, erection and dismantling. 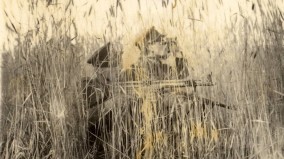 Vytautas Gavėnas (alias Vampyras), member of the headquarters of the Tauras military district, and Juozas Ališauskas (alias Klaidas) during reconnaissance on August. 15, 1948 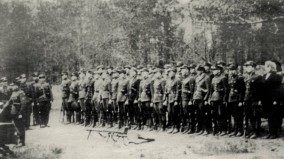 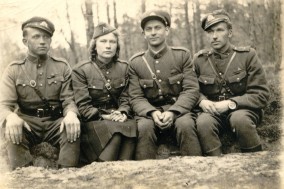 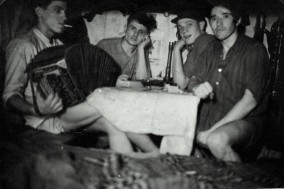 In a bunker… In such a cubbyhole, partisans spent a lot of time, especially in winter.

WAR AFTER WAR: ARMED ANTI-SOVIET RESISTANCE IN LITHUANIA IN 1944-1953

The exhibition deals with the partisan war i WAR AFTER WAR n Lithuania after the Second World War, when the country was occupied by Soviet troops. The partisan war was more or less unknown in the West.

The Lithuanian underground and armed partisan resistance was the biggest and strongest in the Baltic States. A peace conference had been expected after the Second World War that would result in an independent Lithuania, but no help was forthcoming from outside. The main resistance ended in 1953 although the last partisans were killed as late as 1965. A total of 20,000 partisans had, by then, been killed.

The stands tell the story of the partisans, the military organization and everyday life and activities, along with topics such as the partisans and their families following deportation.