Much of this text comes from the book:Travel Guide. Traces of the Cold War Period. The countries around the Baltic Sea. Johannes Bach Rasmussen. Published by the Nordic Council of Ministers, Copenhagen 2010.
This book was produced in cooperation between Øhavsmuseet (The Archipelago Museum) and The Baltic Initiative and Network.

We use the term “The Cold War period” and not simply “The Cold War” in headlines and on the website in general because not all events in the Soviet Union – which is included in this website – can be called “Cold War” events; for example, the partisan struggles against the Communist regimes, the deportations of people to remote parts of the Soviet Union, the GULAG concentration camps and the popular demonstrations in Communist countries demanding better living conditions and political reforms.

HISTORY OF THE COLD WAR PERIOD IN BRIEF

The end of the Cold War period and the collapse of the Soviet Union took place around 20 years ago. This means that people in both Eastern and Western Europe under the age of around 30 do not have any clear recollection of the living conditions or the cold political realities of the Cold War period.

One of the main tasks of the Initiative and Network is therefore to inform young people of the history of the Cold War period.

The Cold War is the name given to the strained relations between the countries of NATO (main partner U.S.) and those of the Warsaw Pact (main partner Russia). The Cold War is normally considered to cover the period from the end of the Second World War in 1945 to the collapse of the Soviet Union in 1991.

The start and end of the Cold War Period

To give the exact starting point of the Cold War is, in fact, difficult. Some Russian historians believe that the Cold War had already commenced in the early 1930s or even before, when Stalin was in power. A strong communistic patriotism was prevalent at the start of the 1930s, including ideas of an external enemy: the surrounding hostile capitalist countries.

It is not so difficult to state when the Cold war period ended. This came about with the fall of the Berlin Wall in 1989, or the collapse of the Soviet Union in 1991. Some people believe that the contradictions between Russia, in particular, and the West have continued and that there is still an ongoing Cold War today, albeit expressed in different ways.

“An Iron Curtain has descended across the Continent”

The leaders of the three main Allied victors of the Second World War held a conference in Yalta, Crimea, in February 1945: Churchill (UK), Roosevelt (US) and Stalin (The Soviet Union). The purpose was to discuss the post-war reorganization. 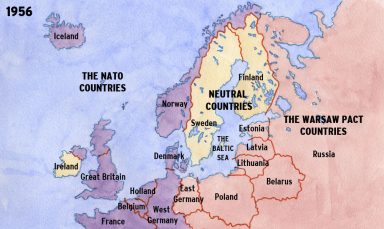 The Allied armies stood deep in Nazi Germany and the war in Europe was nearing its end. Among other things, it was decided at the conference to divide Germany into zones administered by the Allies (including France). It was also agreed that the eastern part of Europe, in which the Soviet army was now present, should form the Soviet sphere of interest. At a later conference in Potsdam, Stalin promised the Western Allies that he would ensure the Eastern European countries’ right to national self-determination – a promise which was not kept. Communist dictatorships were installed by Stalin in all Eastern European countries occupied by the Soviet Army, including Estonia, Latvia, Lithuania, Poland and East Germany (the Soviet occupation zone).

It must be stressed that the Soviet Union suffered the greatest loss of life in the Second World War. The Soviet army was a major cause of the Nazi defeat in Europe but it was, nonetheless, the Soviet Union that introduced Communist dictatorships by force into the previously independent states of Eastern Europe for the following 45 years.

Even in 1946, Churchill noted that an Iron Curtain has descended across the Continent and not only to Soviet influence but to a very high and in some cases increasing measure of control from Moscow.

The strongest symbol of the Iron Curtain was the Berlin Wall, constructed in 1961 by the Communist regime between the East and West sectors of the city.

Berlin, the old German capital, had been divided into four small allied sectors, even though the city was situated right in the middle of the Soviet occupation zone (later East Germany). The wall was built because 3.5 million people from Communist East Germany had fled to West Germany prior to the building of the wall.

The Cold War: the Arms Race, the Balance of Terror and crises between the Soviet Union and the Western countries

Immediately after the war, it was clear that two blocs with very different political systems were facing each other. One outcome was that two military organizations were formed: NATO (1949), with western member states, and the Warsaw Pact (1955), with Communist member states.

A military race commenced between the two blocs, especially with regard to arsenals of nuclear weapons. The balance between the nuclear arsenals became known as the Balance of Terror. The total arsenals were of such a size that earth’s surface could have been eradicated 2,000-3,000 times over.

Crises arose on a number of occasions that could have developed into military confrontation, in particular The Berlin Crisis (1961) in which the Soviet Union wanted to change the status of the city, and the Cuban Missile Crisis (1962), in which the U.S. prevented the Soviet military build-up of missile bases in the nearby Communist Cuba by threat of force. Other critical events were the Vietnam War (from the early 1960s to 1975) and the uprisings in the Communist countries of Hungary (1956) and Czechoslovakia (1968).

The “cold” political and military relations between the Soviet Union and its satellite states, and the Western countries are described as a Cold War.

Armed and unarmed resistance against the Communist regimes

The Communist states developed as brutal and censored societies, with extensive control over their inhabitants on the part of secret police organizations and a large number of civil informants. A Sovietisation of the countries’ national culture and identity took place within all fields of society such as education, culture and religion.

Immediately after the Second World War, armed national partisan movements began fighting the Communist regimes in the Baltic States and Poland. They expected military help from the West, but it never came. The partisan movements were brutally destroyed. 20,000 partisans were killed in Lithuania and the armed resistance was, in practice, finished there in 1953.

Many non-violent demonstrations and uprisings took place with wide popular support but they were nearly all severely suppressed with the use of force. The most extensive uprisings took place in 1956 in Berlin, Germany, in 1956 in Poznan, Poland, in 1956 in Budapest, Hungary, in 1968 in Prague, Czechoslovakia, in 1970 in Gdansk, Poland, and in nearly all the Eastern European countries in the late 1980s before the collapse of the Soviet Union.

Many of the demonstrations were largely due to the people’s poor living conditions, including comprehensive shortages of daily goods.

Millions of people were deported from their homes and homelands by the Communist regimes. People were deported either as “criminals” to the hard labour GULAG camps, or as slave workers to remote and undeveloped parts of the Soviet Union where living conditions were extremely difficult.

The crimes of the “criminals” were for example “betrayal of the motherland” or “counter-revolutionary activities”. This included people whose views were not in line with the Communist ideology, even people who had simply told jokes about the regimes. Their trials did not follow the simplest of democratic guidelines.

GULAG is the Russian acronym for the Chief Administration of Corrective Labour Camps and Colonies. There were around 500 separate camps, some of them with hundreds or even thousands of connected camp units. The most infamous complexes were located in the Arctic or sub-Arctic regions.

The other group of deportees, the slave workers, were mainly families of prisoners (“bandit families”) and farmers who had refused to join the collective farms (“kulaks”). They were all categorized as “national and class enemies”. Millions of people in the Soviet Union were deported as slave workers.

After Stalin’s death, many deportees were able to return to their homelands.

The collapse of the Soviet Union

The popular resistance against the Communist regimes increased in the late 1980s.

The background to this lay in the Soviet movements of glasnost (openness) and perestroika (reconstruction, change). Additionally, many Communist countries were on the verge of economic collapse and there was great inefficiency in all areas of society. There were shortages of all kinds of goods and the shops were empty.

Demonstrations were led in Poland by the strong trade union Solidarity and are described as the beginning of the end of the Soviet Union.

Free elections were conducted in all countries in the Baltic States and Poland and all Communist governments were allocated. The new national parliaments declared independence and withdrew from the Soviet Union. With the support of Russia, Moscow-backed Communists and Soviet military forces sought to reverse the independence declarations in several countries, but hundreds of thousands of people went out into the streets to defend their newly-won freedom. Fourteen people were killed and more than 700 injured by Soviet military and security forces in Vilnius in January 1991.

It was not practically or politically possible for the old Communist rulers to prevent the independence of the former Communist countries.

The Berlin Wall, the most well-known symbol of the Cold War, collapsed in November 1989. The two German states were reunited in 1990.

The newly independent Baltic States and Poland became members of NATO and the European Union. The mushroom cloud after the nuclear bomb was dropped on the Japanese town of Nagasaki on 9 August 1945. Total deaths in Hiroshima and Nagasaki by the end of 1945 may have been as high as 120,000. Many more people died later because of radioactive contamination. The widespread destruction of Hiroshima and Nagasaki at the end of the Second World War gave the world an image of the destructive force of the atomic bomb and contributed to restraint in the use of nuclear weapons during the crises in the Cold War period.

The leaders of the three main Allied victors in the Second World War at the Yalta Conference shortly before the war ended in Europe. From left: Winston Churchill, United Kingdom, Franklin D. Roosevelt, United States, and Joseph Stalin, Soviet Union. Among other things, it was agreed that the Eastern European countries would form the Soviet sphere of interest. The result was that Communist governments were established in all the countries, without democratic elections. Estonia, Latvia and Lithuania were included in the Soviet Union as Soviet states. 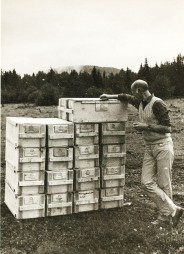 Boxes with the remains of dead Lithuanian deportees, who died in exile. Only in 1989-1991 did it become possible for families to repatriate the remains of their dead relatives for reburial in Lithuania. 136,000 Lithuanians were deported as slave labourers to remote and undeveloped regions of the Soviet Union, often to locations where living conditions were harsh, such as Siberia and the Arctic zone. The deportees were mainly “kulaks” (independent farmers) or so-called “bandit families” of punished individuals. They were only informed of their deportation immediately prior to their departure. Only one half of the deportees ever returned to Lithuania. Around 28,000 died in exile. (The Museum of Genocide Victims, Vilnius, Lithuania). 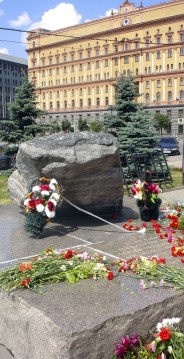 Memorial to the victims of the secret Soviet police has been raised by the human rights organisation MEMORIAL in front of Lubyanka, the headquarter and prison of the police through many years. The stone is from Solovetsky Island by the White Sea, the location of one the worst prison camps (later a prison). According to the writer Aleksandr Solzhenitsyn, this camp was the "mother of the GULAGs". (Johannes Bach Rasmussen).

History of the Cold War period in brief for each country