The Second World War. Invaded by Germany because of its strategic location in the North Atlantic

Norway declared itself neutral at the outbreak of war in 1939 but was still attacked by Germany in 1940. The reason was Norway’s important strategic location in the North Atlantic, close to the Allies’ shipping convoy routes from the United State to the ice-free northern Soviet harbours along the Barents Sea coast, including the major port of Murmansk.

The Norwegian Government resisted the German invaders. Most notably, the German battle cruiser Blücher was sunk in the Oslo Fjord by the defences of the Coastal Artillery Fortress Oscarsborg. The resistance in Norway was abandoned a few months after the occupation, although the king and the government continued the fight from the United Kingdom. The German occupation forces, together with a puppet government, were thwarted by a widespread and strong Norwegian resistance movement, the Home Front, which carried out sabotage and valuable intelligence activities.

The northernmost part of Norway, Finmarken, was liberated by the Soviet army in 1944-45. It was an important achievement. From this area, daily attacks were carried out by German bomber planes against Murmansk, where military equipment for the Red Army was unloaded from convoy ships and put onto the railway.

Member of NATO and neighbour to the Kola Peninsula, one of the most powerful Soviet military centres

Norway had become more sceptical of neutrality following the German occupation during the Second World War and also the Soviet occupation of the Eastern European countries after the war. A Soviet invasion of Norway was regarded as possible. Norway was therefore one of the signatory parties to NATO’s formation in 1949. (NATO: North Atlantic Treaty Organization).

After the war, the Russian Kola Peninsula was developed as one of the most comprehensive and highly fortified military centres in the world, and it was located on the border with Norway. The ice-free military harbours housed the Soviet Northern Fleet, with seven naval bases, several shipyards, air bases and factories producing military equipment. The area was home to more than 200 submarines, most of them powered by nuclear missiles. Around two-thirds of all the Soviet Navy’s nuclear force was based here.

The main sea route from the Kola Peninsula to the Atlantic Sea was along the Norwegian coast. It formed the access route to the coastal areas of the United States and the Western European countries, as well as the American supply line to Europe in case of war.

Northern Norway in particular thus became a cornerstone in the NATO defence system and it resulted in close military cooperation between the United States and Norway.

Northern Norway was simply developed as the first Western defence line in case of war with the Soviet Union, and the whole of Norwegian society was prepared for a “total defence” war in case of a Soviet invasion.

Behind this development was massive US economic support for the construction of air bases, harbours, arms reserves, fortifications and monitoring and warning systems, as well as support for fully modernised Norwegian military forces. Comprehensive secret service activities were an important part of the Norwegian role in NATO. 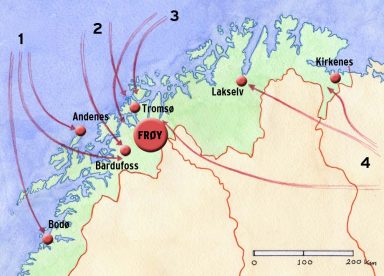 The arrows show a possible Soviet attack on Northern Norway. 1. Bombers 2. Parachute troops 3. Marine infantry, motorised infantry and tank forces 4. Motorised infantry and tank forces The middle and southern parts of Norway were “hidden” behind Sweden and strong Swedish defence forces. The dots show some Norwegian defence positions: gun batteries, torpedo stations and mine fields. The circle show the Frøy infantry line. All positions are located more than 500 kilometres from the Soviet border. These positions were the most important in case of war because it was assumed that it would not be possible to defend Finmarken, the frontier region with the Soviet Union. (Drawing by Arne Erik Larsen based on maps from National Fortification Heritage, Oslo, Norway). 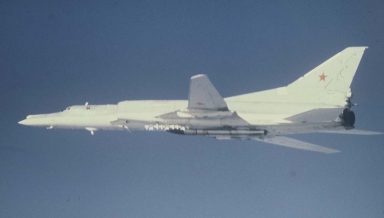 A Soviet Backfire bomber armed with a nuclear capable cruise missile. One of the 1000 Soviet airplanes intercepted by Norwegian fighters outside the coast of Norway every year in the 1960s to 1980s. In the top year of 1972, more than 1.500 Soviet aircrafts was intercepted. (The Norwegian Aviation Museum Bodø). 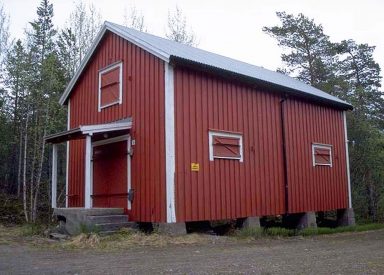 Norway was prepared for all-out war in case of a Soviet invasion. Never again did they want an invasion like that of 9 April 1940, when the Germans surprised an unprepared Norwegian nation. Military equipment, arms, fuel stores etc. were spread all over the country, often hidden in buildings such as cottages, garages, storage buildings etc. (National Fortification Heritage, Oslo, Norway). 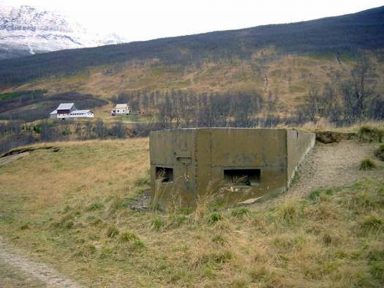 From the Frøy defence line was a strong infantry line built over the period 1950-90. See the map above. (National Fortification Heritage, Oslo, Norway).