Estonia was an independent republic from 1918 until 1940, when Soviet troops occupied the country. This was the result of the so-called Molotov-Ribbentrop Pact between Nazi Germany and the Soviet Union. A part of this agreement was that Estonia, the other Baltic States and a part of Poland would come under the Soviet sphere of influence.

Estonia was then forced by the Soviet Union to sign a mutual assistance pact that allowed the Soviet army to occupy Estonia. The occupation was followed by a parliamentary election with only Communist candidates. The Communist parliament paved the way for Estonia’s annexation to the Soviet Union as the Estonian Soviet Socialist Republic.

The Soviet occupation was a regime of terror, with mass arrests, executions and mass deportations to remote areas of the Soviet Union. Those arrested and executed were mostly leading politicians and officials from the former independent republic.

The Soviet occupation was followed by a Nazi occupation after Nazi Germany’s attack on the Soviet Union. Many people expected a new independent Estonia when the Soviet army was forced out of the country but the reality was that the Nazis simply became the new occupying power.

As a result of the two occupations:

The second Soviet occupation after the Second World War was a follow-up to the first occupation, characterized by a fully controlled, brutal and censored society with arrests, executions, deportations, Communist unification of social and cultural life, the destruction of everything that reminded people of an independent Estonia (destruction of national identity), nationalization of private property, religious oppression, collectivization of agriculture, courts and military tribunals based on undemocratic principles, indoctrination of youth, no national army, use of Russian as the main language (“the language of friendship of nations”), key positions in local administration given to Russians or Russian Estonians etc. 250,000 immigrants came from Russia between 1956 and 1965, to a country of around 800,000 Estonians. (Today a quarter of the residents are ethnic Russians).

The deportations took place from 1944 until 1953. The biggest mass deportation occurred in 1949 and included all the Baltic countries. Around 21,000 Estonians, or 2.5% of the population, were deported to remote parts of the Soviet Union. The deportations were centrally planned from Moscow by the Council of Ministers of the Soviet Union. The arrests were fulfilled with the help of local Communists. The deported people were described as “kulaks (independent farmers) and their families, families of bandits, nationalists in hiding ….. as well as families who provide assistance to bandits”. All the people were deported without any trial. It went against all democratic and human principles that the families were automatically considered guilty if one family member was presumed guilty of a crime.

The deportation in 1949 included 7,500 families. 50% of those affected were women and 35% were children under the age of 16. The deportees included invalids, pregnant women, newborn babies, people over 90 years old and children who had lost their parents. It is estimated that only a half of those deported were able to return to Estonia.

The armed and unarmed Estonian resistance

14,000-15,000 armed Estonian partisans or guerrillas, so-called Forest Brothers, participated in the armed resistance against the occupying forces. The movement reached its peak in 1946-1947 and came to an end in practice in 1956. About 2,000 of them died in open battle, mainly with KGB forces.

The unarmed resistance or dissident activities were focused on the underground production and distribution of uncensored literature and pamphlets as well as providing information to the West (often through Western journalists). The open dissident activities, also considered illegal, were written protests containing many signatures, such as the protest when the Soviet dissident and nuclear scientist Andrei Sakharov was condemned to exile. The Estonian dissidents were often groups of young people and students. The models for these groups were the foreign groups created on the basis of the so-called Helsinki Declaration from 1975 in which it was stated that people had official permission to say what they thought and that there should be respect for territorial integrity, civil and human rights etc. The Soviet Union had signed this declaration but was not aware of its consequences.

It is estimated that around 500 Estonian dissidents were arrested, tortured, jailed and sent to GULAG hard labour camps in the period between 1953 and 1988.

The beginning of the end of the Soviet Union began in the second half of the 1980s when Mikhail Gorbachev, the General Secretary of the Communist Party of the Soviet Union, introduced the policies of glasnost (openness in society) and perestroika (reconstruction of society). This resulted in several new non-Communist political parties.

A coalition of parties, The Popular Front, gained a parliamentary majority in 1990 and decided to restore the independent Republic of Estonia from 1940. The decision was finally adopted by the new democratic parliament in 1992.

Estonia managed to avoid the violence and killings that took place in the other Baltic States in 1991. 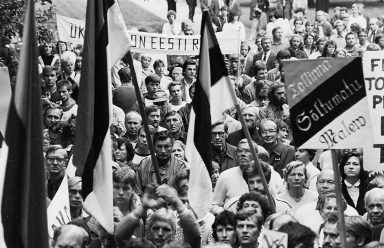 From the so-called Hirvepark demonstration held in August 1988. it was dangerous to organise or participate in such demonstrations. The demonstration became a tradition and was held on the anniversary of the 1939 Molotov-Ribbentrop Pact between Nazi Germany and the Soviet Union. Estonia became a part of the Soviet “sphere of interest”. The Soviet Union subsequently occupied the independent Estonia, motivated by the need for Soviet troops in the country. Estonia was later annexed into the Soviet Union. The largest posters at the demonstration this year declared “Freedom for Estonia” and “Let’s Live without Lies”. (Tunne Kelam, Estonia).

The collectivisation of Estonian agriculture. An example of the Sovietisation of society.

This collectivisation and nationalisation of private farmland was mainly based on the Communist ideology. It was a tragic project of enormous dimensions which involved thousands of families and destroyed the effective family farming system.

The idea was that large jointly operated agricultural units gave a better yield than small individual farms and that collectivisation would give economic equality to the farming population.

It was not possible for the State to finance the necessary investments and to coordinate the comprehensive agricultural planning and accompanying industries. Many efforts failed (for example, the establishment of big horse and tractor centres). Other problems involved organizing the work on big farms where indifferent people had little motivation. The ineffective agricultural system of the Soviet Union was the reason for a chronic lack of food production.

One of the reasons for the mass deportations in 1949 was to force this collectivization by deporting independent farmers (kulaks) who had not joined the collective farms. It succeeded. Before the deportation, only 9% of farmers had abandoned their private farms. Two months after the deportations, a half of all farmers had done so, afraid of new deportations. It was also a deathblow to the guerrilla movement, which depended on the farmers’ support. 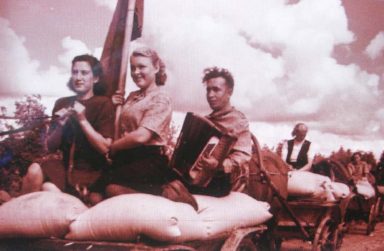 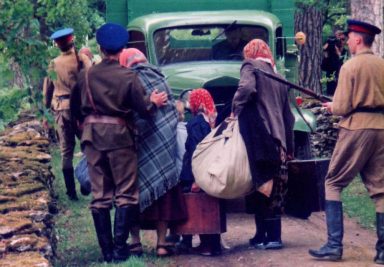 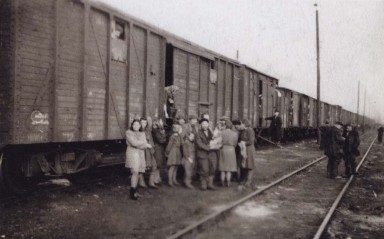 A rare and strong photo. Krasnoyarsk Krai in the middle of Siberia, April 8, 1949. Estonian deportees have ended their week-long journey in cattle wagons and are officially being handed over to the local regional Russian department of the Ministry of Internal Affairs, based on a statement by the train master. This so-called “Special Contingent of Estonians” consisted of 405 people, of which 82 were men, 203 were women and 120 were children. The 1949 deportation involved 21,000 Estonians or 2.5% of the whole population. The deportees were mainly kulaks (independent farmers) who had not joined the collective farms. They were deported without any trial. Women represented 50% of the deportees. 35% of them were children under 16 years of age. (The Museum of Occupation, Tallinn). 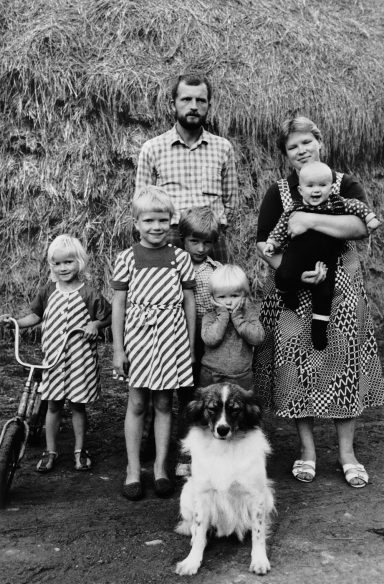 The Estonian politician Tulle Kelam finished his book “Estonia’s way to freedom” with this photo (taken by himself) and with this text: “On Saaremaa, Estonia’s biggest island, Ester and Leevi Naagel decided to start a family farm with not much more than their 5 children as their starting capital. They joined the Estonian National Independence Party and actively took part in the registration of citizens in Saaremaa”. (Tunne Kelam, Estonia).