At the Yalta Conference in 1945, it was decided between the Allies that a coalition government should lead Poland until free elections could be held. The members of the provisional government were the Polish government-in-exile, the “Home Army” (the biggest partisan movement during war time) and the Communist Polish Workers Party. After the war, Polish territory was under the control of the Soviet Army.

The “free election” that followed in 1947 was completely controlled by the Soviet Union and the Communist Party, who “won” 96% of the seats in parliament. The opposition was simply destroyed by administrative means and many members were murdered or forced into exile. The fact that the Western nations accepted this in spite of the Yalta agreement has been described as a Western betrayal of Poland to appease the Soviet dictator Stalin.

No less than 21.4 % of the population died during the war, including nearly the whole Jewish population. Towns were ruined and the infrastructure destroyed as a result of the German invasion in 1939 and, later, the battles between the advancing Soviet and the withdrawing German armies.

80% of the capital, Warsaw, was destroyed during the war, partly because of extremely heavy fighting between Polish partisans and the German Army (the Warsaw Uprising) but mainly because of the systematic use of dynamite by the German army in the last days of the occupation.

The post-war years were marred by economic depression and social unrest. Following pressure from the Soviet Union, the Communist government rejected an offer of support from the United States to rebuild the country (the so-called Marshall Plan).

Demonstrations and strikes against living conditions

The Communist regime never succeeded in achieving stable social development or sufficient and independent economic development (a rise in living standards during the 1970s was simply based on foreign loans). The Communist government steered society with a brutal hand and nearly always in close contact with Moscow. More than 200,000 people passed through the prisons from 1944 to 1956 for political reasons.

It was the general living conditions, such as lack of food and insufficient income that started a series of strikes and demonstrations. In 1956, a strike among workers in Poznan developed into huge riots in which 80 people were killed.

The regime turned anti-intellectual and anti-Semitic following demonstrations in the late 1960s. This was against a backdrop of in-fighting within the Communist party and anti-Semitic sentiment as a result of the war between Israel and Egypt and the Soviet Union’s close relationship with its Arab allies. Approximately 20,000 Jews lost their jobs and had to emigrate, including many Jewish Communists. The same happened in other Soviet countries. Strikes and demonstrations broke out in Gdansk and some other cities in 1970, during which hundreds of workers were cynically shot down. Price hikes led again to strikes in many cities in 1976.

A turning point for the opposition came in 1980 when a strike at the shipyard in Gdansk forced the government to accept the creation of Solidarity, a free trade union under the leadership of Lech Wałęsa. Hard struggles between the free trade unions and the Communist regime took place over virtually the next ten years, including many demonstrations that ended in fatalities and mass arrests.

In 1989, after the collapse of the Soviet Union, the first non-Communist Prime Minister, Tadeusz Mazowiecki, was elected as the first in any Soviet bloc country. 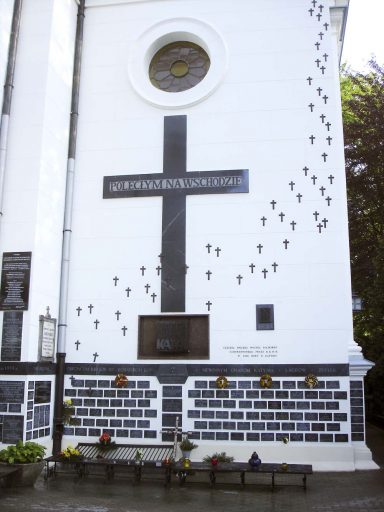 The Katyn Massacre. Even before the Second World War, it was the Soviet Union’s plan to include Poland in the Soviet bloc by eliminating expected and potential opponents. Around 22,000 Polish military officers, policemen, intellectuals and prisoners of war were executed en masse in 1940 by the Soviet Army with the approval of the Soviet Politburo, including Stalin, and at the initiative of Berija, the leader of the Soviet secret police. The massacre took place largely in the Katyn Forest in Tver region west of St. Petersburg in Russia. This became known as the Katyn Massacre. The executed Poles were imprisoned by the Soviet Army when they fled east from the invading Germans in 1939, an invasion that had been agreed between the Soviet Union and Nazi Germany (the so-called Molotov-Ribbentrop Pact). The massacre at Katyn has understandably become a national trauma for the Poles, often referred to as “The Polish Golgatha”. The photo is from one of the Katyn Memorials in the Warsaw church Karola Boromeusza na Powązkach, Powązkowska Street 14. 1000 plaques on the church wall are bearing the names of Polish officers murdered in Katyn.