Lithuania was independent from 1918 until 1940 and then occupied from 1940 until it re-established its independence in 1990. Lithuania was occupied from 1940 until 1941 by the Soviet Union as a result of the Molotov-Ribbentrop Pact between Nazi Germany and the Soviet Union. Red Army troops crossed the Lithuanian border on 15 June 1940.  The new Soviet puppet government obediently set about applying the will of Moscow. The elections to the new parliament were announced and only candidates approved by the Communist were involved.  The new parliament subsequently decided to convert Lithuania into a part of the Soviet Union. In 1941, the German army invaded the Soviet Union and, hence, Lithuania. A new and independent Lithuanian government was formed but functioned only for a short period until it became clear that in practice Germans held all the power.

In 1944, the German army was driven out of Lithuania by Soviet forces and Soviet hegemony was re-established.

After the Second World War, a comprehensive Sovietisation of the Lithuanian society continued from the first occupation. The Lithuanian Communist Party and the authorities were in practice controlled from Moscow, from whence all orders came. Control over the Lithuanian society involved monitoring, prosecution and removal of “national and class enemies” which were:

The armed and unarmed lithuanian resistance

The Lithuanian underground and armed partisan resistance was the biggest and strongest in the Baltic States. They expected a peace conference that would result in an independent Lithuania, but no help was forthcoming from outside. The main resistance ended in 1953, but the last partisans were killed as late as in 1965. A total of 20,000 partisans had then been killed.

Besides the armed resistance, there was a broad popular unarmed opposition, in particular expressed through illegal printed and handwritten materials, slogans painted on walls, demonstrations of young people as well as activities organised by the Church and dissident movements.

Mass deportations to remote parts of the Soviet Union

The deportees sent to isolated regions were mainly “kulaks” and so-called “bandit families” of punished individuals. 136,000 of these people were deported to Siberia, the Arctic zone and Central Asia.
Around 28,000 of them died in exile. After Stalin’s death in 1953, it became possible for many deportees to return to Lithuania in the following decades.

Reestablishment of Lithuania as an independent state

A reform movement, Sąjūdis, was created in 1988 with a program of democratic rights. The background was the policies of glasnost (openness in the society) and perestroika (reconstruction of the society) introduced by the Soviet leaders.

In 1990 a new elected parliament with many deputies who were supported by Sąjūdis declared the reestablishment of the independence of Lithuania. Lithuania was the first former Soviet country to declare independence but it was not accepted by the Soviet leaders. 23 people were killed and 700 wounded by Soviet military forces during 1991. Independence was finally secured following the collapse of the Soviet Union. 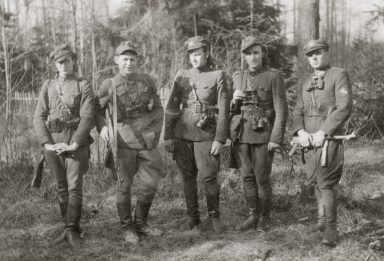 Jonas Žemaitis, second from the left, became leader of the armed partisan movement in Lithuania. He was elected chairman of the Presidium of the Council of the Movement of the Struggle for Freedom of Lithuania. This council was, following Lithuania’s independence, approved as the country’s legitimate government during the Soviet occupation. In 2009 he was therefore officially recognized as the Lithuanian president at the time when he was the leader of the partisan movement. He was arrested in 1953 and sent to Moscow at the demand of Lavrenti Beria, leader of the Ministry of Internal Affairs. Beria offered him his freedom if he would co-operate. He refused and was subsequently executed in Butyrka prison in Moscow and buried at the Donskoy Monastery. In 1997 Jonas Žemaitis received one of the highest Lithuanian awards, the 1st Class Order of the Cross of Vytis. (The Museum of Genocide Victims, Vilnius, Lithuania). 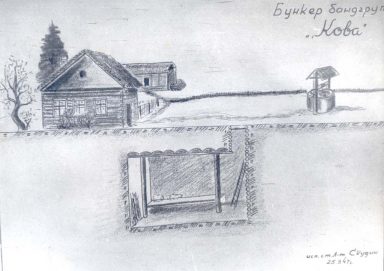 Sketch of a forest underground bunker used by partisans. The entrance was well hidden, as were the ventilation and smoke shafts. The sketch is from a book by the KGB from 1960, which was used for tracing the partisans. (The Museum of Genocide Victims, Vilnius, Lithuania). 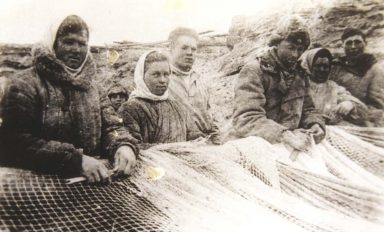 Lithuanians deported to Trofimovsk in the region of the Laptev Sea, an area with permafrost north of the Polar Circle. The photo is from 1949. These deportations took place in 1941. In 1942-43, a third of the deported people died, mainly children and elderly people. (The Museum of Genocide Victims, Vilnius, Lithuania).