The Danish belts were the link between the Baltic Sea and the Atlantic.

Membership of NATO Denmark was occupied by Germany during the Second World War but came through the war without major destruction or loss of life unlike, for example, Poland, the Baltic States and the Soviet Union. Denmark received post-war help from the U.S., so-called Marshall Aid, for reconstruction and development.

The Warsaw Pact was the Communist countries’ military response to NATO. The promoter and main partner was the Soviet Union. The Pact’s policy and operations was controlled from Moscow.

In a wider context, the Danish belts were the link between the Baltic Sea and the Atlantic. The belts were international waters. It was the point of exit of the Soviet Baltic Fleet to the strategically important North Atlantic Ocean and it was also the point of entry of the NATO sea forces to the Baltic Sea. This related mainly to submarines, which thus navigated near to the northern and central parts of the Soviet Union. Another reason for the Soviet Union’s interest in controlling access to the Baltic Sea was the many shipyards that could repair the Warsaw Pact’s ships in case of war.

In some Soviet attack plans, Sjælland was seen as a stepping stone by which Warsaw Pact forces could reach Sweden and, thereby, the main of goal Norway and the Norwegian harbours, bordering the strategically important North Atlantic Ocean. Control over the North Atlantic meant control over the essential and vital link between Europe and the U.S. 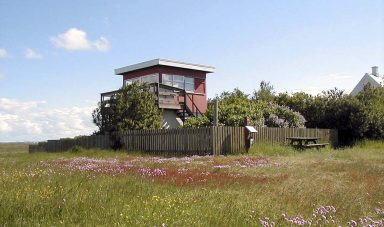 One of the main tasks for the Danish forces in peacetime was to monitor the Soviet shipping traffic through the Danish belts, the link between the Baltic Sea and the Atlantic Ocean. The traffic was monitored from small coastal cottages, light towers, military flights and ships. Top: A small cottage on Albuen, a lookout on the westernmost peninsula of Lolland by the Langelands Bælt. This cottage is today protected as a Cold War memorial.(Danish Nature Agency). 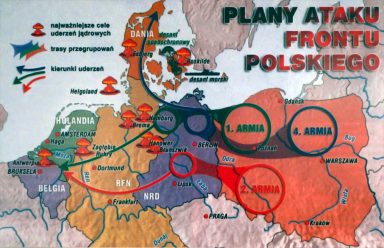 During the Cold War period, the Warsaw Pact countries came up with many different plans for attacking Western Europe. The planned attack on Denmark was for a long time structured around the same premise: primarily Polish but also DDR forces would form the advance guard in an attack on Jutland. An attack on Sjælland would be implemented primarily by Polish forces supported by DDR and (later) other Soviet forces. This simplified sketch from the beginning of the 1960s shows two nuclear bombs being dropped on the Danish cities of Roskilde (near the capital Copenhagen) and Esbjerg (on the west coast of Jutland). In the event of war, NATO reinforcements would supplement the Danish forces via Esbjerg. It was expected that these two nuclear bombs dropped in the first days of the war would put a stop to Danish resistance. If this was not the case, the Warsaw Pact plan in the following days was to drop a large number of tactical nuclear bombs all over Denmark, on Jutland between 27 and 52 bombs on the first day and between 16 and 32 on the second. Such an attack would cause incalculable damage to the civilian population. It is a wonder how the invaders themselves imagined they would avoid nuclear irradiation (probably something between an unrealistic belief that they would be protected from exposure and a lack of respect for their own soldiers’ lives). The ship symbol indicates a landing on Sjælland. (Colonel Kuklinski Intelligence Museum, Warsaw Poland). 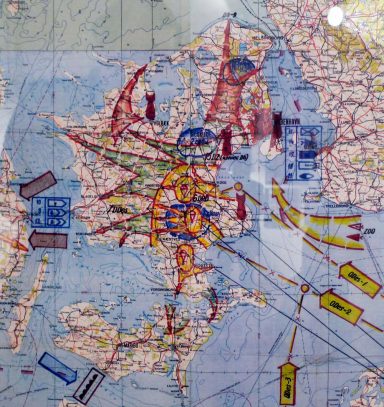 A more detailed attack plan against the island, Sjælland, than shown above. This plan is from 1970 and signed by the Polish Minister of Defence, Wojciech Jaruzelski, later Communist president of Poland. This plan was handed over to NATO by the Polish colonel, spy and today national hero, Ryszard Kuklinsky. The plan shows that parachute forces would be dropped in the middle of Sjælland and then move north towards the capital, Copenhagen, and west towards the major cities of the coastal Store Bælt. Signatures shows that nuclear bombs were to be dropped on the Stevns Fort (on the east coast of Sjælland, in the middle of the photo), as well as on the towns of Køge (south of Copenhagen), Holbæk and Copenhagen. (Colonel Kuklinski Intelligence Museum, Warsaw Poland).