The island of Hemsö near Hernösand.
There is a ferry to the island. See sailing times on the website (twice an hour during the day). The ferry station is located approximately 20 km north of Härnösand.
From the ferry station, Sanna, on Hemsö it is 15 minutes by car to the fortress. 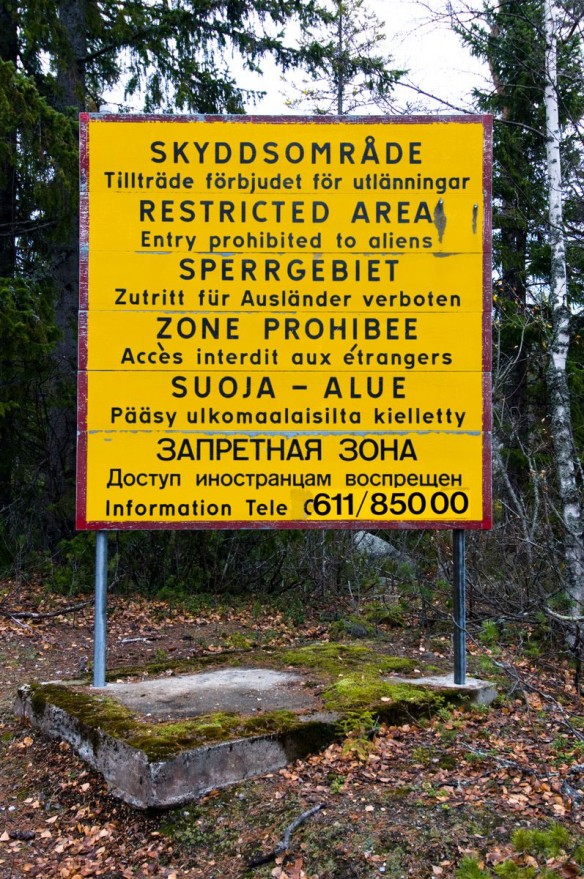 An old prohibition sign. However, it would probably not have been relevant for spies from the Warsaw Pact to visit the island. One of the officers who participated in the construction of the Hemsö Fortress was Stig Wennerström, a Soviet spy who was very highly placed in the Swedish military. It means that the Warsaw Pact may have known about the fortress in detail from the beginning. In the late 1960s another spy Stig Bergling was an officer on the fortress. He stole secret documents about Swedish military installations which he sold to the Soviet Union. It is a unique experience to visit the fortress, not least because all the installations and effects (even the smallest) have been maintained, in contrast to the other former military installations in countries around the Baltic Sea. Many of the military installations are also in a position where they could be immediately put back into operation. The museum cannon from the heavy battery on Storråberget with three cannon turrets, each with two 15.2 cm cannons. 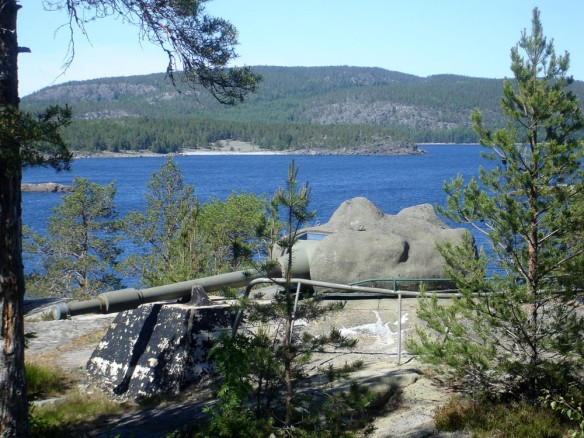 From the light battery on Havstoudd with a 7.5 cm cannon. The camouflaged entrance to the plant. From the underground plant in Storråberget.

The Hemsö Fortress, located on the island of Hemsö, was one of the cornerstones of the coastal defence artillery during the Cold War period. The site is of strategic importance because of the harbour at Härnösand and a navy depot in Gustavsvik.

The idea of a fortress emerged in 1883 but the first defence installations were built in 1916 (the ruins can still be seen).

THE HEMSØ FORTRESS AND ITS MAIN FUNCTION

The objective of the batteries was to defend the coast from enemy warships. A Soviet invasion from the sea would be answered by Swedish missile flights, submarines, warships and, in addition, the coastal artillery. The maximum range of the heavy cannon was 22 km. The batteries were protected by air defence cannon and other kinds of defences in the area.

THE HEAVY BATTERY ON STORÅBERGET

The main part of the plant is 40 meters underground and blasted into the mountain. There are lift shafts to take shells up to the cannon on the surface. 340 men were to live here in isolation for 3 months in case of war and nuclear attack. (The light battery on Havstoudd was managed by 112 men). All necessary facilities were provided, such as rooms for managing the cannon (firing control room etc.), power station, technical workshops, rooms for administration, all kind of rooms for daily staff chores, shop, hospital etc. The battery was closed down in 1989.