Memorials in front of the TV Tower where the bloody Soviet military attack on the freedom defenders took place on January 13. 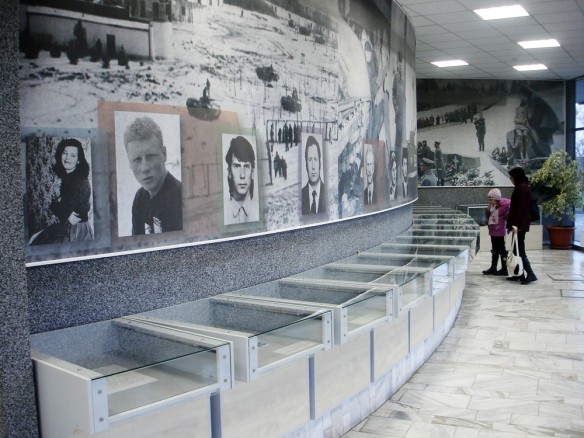 A small museum on the ground floor of the tower tells of the event. The portrait on the wall on the left is Loreta Asanavičiūtė. This 24-year-old seamstress was the only female victim, and became the most famous. She was run over by a Soviet tank and later died in hospital. The streets around the TV tower have been named after the victims. Painting from the museum. Artist: Navakas. 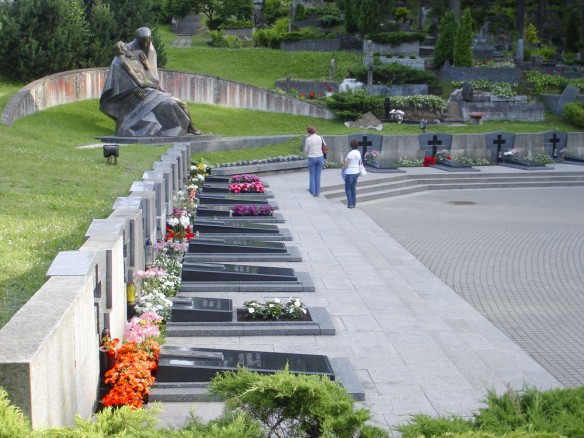 From the graves of the victims on the Antakalnio Cemetery. They all received one of the highest Lithuanian awards, the 1st Class Order of the Cross of Vytis. The cemetery is located 2 km north-east of the centre (Old Town). Main entrance from Karių Kapų Road.

THE BLOODY SUNDAY. 13 PEOPLE KILLED BY THE TV TOWER

Lithuania had already declared independence of the Soviet Union in March 1990. The following period was difficult with a weakening economy, energy shortages and high inflation because of economic blockade organized by the Soviet Union. Food prices increased and some products were rationed. The political situation was unstable. The Soviet leaders in Moscow and pro-Soviet groups in Lithuania were dissatisfied with the proclaimed independence, especially the Russian-speaking minorities, supported by the Moscow-backed sector of the Lithuanian Communist Party.