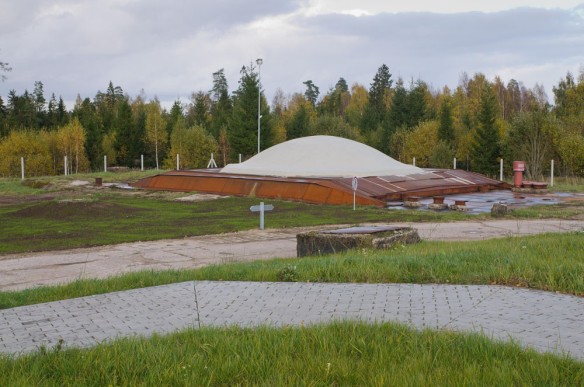 The former underground missile base is newly opened after the reconstruction and hosts the Cold War Museum (reconstruction funds were allocated from the European Structural Funds). Tourists can visit the underground and the missile silos labyrinth and get knowledge of the Cold War period, propaganda strategies, consequences of the nuclear explosions and the life in the military base.

At the time when the United States started building underground military bases, it was decided that the Soviet Union had to maintain its military advantage. For that reason in September 1960 in the village of Plokščiai the Soviets started rapid construction of an underground military base, one of the first in the S. U. The shore of the Plateliai Lake and the Plokštinė forests were perfectly suitable for the construction of the military base. The chosen location for the base was located160 m above sea level, the soil was easy to excavate and the local population was small. The local inhabitants were poor farmers who were paid 4.5 thousand rubles to move their farms. Further, from this location all of the Europe could be covered by the missiles, which could reach Turkey and southern European countries.

Ten thousand soldiers, mostly Estonians, constructed the base. The missile silos were dug out with shovels which took approximately 6-8 months. Simultaneously, in the centre of the four silos they excavated a large hole for the support structures – electrical and radio stations, control rooms and recreation areas for the soldiers who would be on duty. All of these underground facilities were waterproof and covered with earth. They were constructed in the way that under normal conditions the personnel could survive in the silos for 15 days or 3 hours in extreme conditions with the silos hermetically sealed. A 2.5 km water trench was dug to the Plateliai lake, and a water pump station was constructed. The earth which had been excavated was used to lay the foundation for the new road to Plokštinė. Earlier travellers had to get to the base by going through Jogaudai. On December 31, 1962 the construction was completed; at 10 p. m. – just before the New Year – the “rocketeers” accepted their military duties.

Four R12 nuclear missiles, 23 meters high, including the 4 meters warhead, were installed in the silos. The rockets were fuelled with a mixture of kerosene and nitric acid. They were intended to last 10-15 years; in Plokštinė they were changed once in 16 years. The rocket launching facilities were guarded by 6 security systems including barbed wire, alarms, 1700 volt electric wires, etc. The rockets were aimed at different western countries: Norway, Great Britain, Spain, West Germany and Turkey. Every 3-4 years the targeted countries were changed.

These two bases together hosted the 179th rocket regiment, headquartered in Šateikiai. The first commander was Kalisnicenko. After his refusal to participate in the Cuban operation, he was relieved and replaced by Sidorov. Other regimental commanders were Saloha, Ramaniuk and Jereskovskij. They all lived in the town of Plungė, travelling to the base for duty. Only in cases of increased military readiness, e.g. events in Czechoslovakia in 1968, they moved into the officers’ quarters in the base. The personnel of the 179th regiment participated in the deployment of rockets to Cuba; they poured a concrete for the rocket platforms in the central Cuba and in September 1962 the rockets were transported from Šateikiai to Cuba. All of this was done in secrecy. The soldiers worked in civilian clothes and loaded the rockets at night. When the Vilnius-Klaipėda passenger trains were passing by, all lights were turned off at the work site and work would be ceased. The rockets were transported to Sevastopol and loaded on commercial ships for transport to Havana.

Next to the military base there was a canteen and two wooden barracks for the duty relief of 9 officers and 22 soldiers which changed every 3 days. Shifts were 6 hours long; 6 hours in the missile silos and ours off.

3 more groups of officers and soldiers (320 people) lived in the nearby military town. The town had a headquarters, soldiers’ barracks, officers’ quarters, separate canteens for officers and soldiers, medical aid post, food storage, and an autopark area. The autopark roofed two 25 meters long machines for raising and loading the rockets into the silos, as well as machines, which pumped air into the silos. Spare parts, various equipment and insulation were in the maintenance storage section.

There were no incidents with the missiles while they were deployed in Plokštinė. They were removed from the base on June 18, 1978.