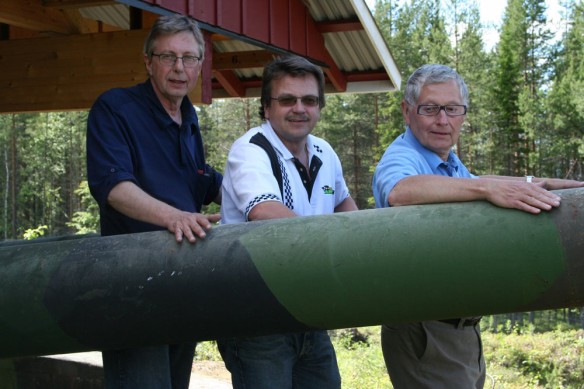 Kåge Nevberg and Anders Mattsson, inspired with enthusiasm for the Victoriafortet,
together with former Battalion officer Björn Brovertz who served in the fort during the days of the Cold war. The barrel as the last outpost over Lulea River. Exhibition with the purpose to explain why the fort was built.

BACKGROUND TO WHY THE FORT WAS BUILT

Churchill was a few years ahead of his time when he coined the phrase ‘the Iron Curtain’ in 1946. By 1950, the Communist threat was a reality and Sweden had begun to plan the defense of its borders. A Russian invasion through Finland and into the north of Sweden was one of the country’s main concerns. The Luleå River corridor was a strategically important area that would require comprehensive protection in the event that the threat of an invasion became a reality.

In 1917, before the end of the First World War, one of Sweden’s major battleships was launched on her maiden voyage. She was called the Queen Victoria and named after Sweden’s queen, who reigned over the country with her husband, King Gustav V, from 1907 to 1930. The Queen Victoria battleship sailed until 1957 when she was decommissioned and broken up for salvage.

By 1957, the Swedish government’s plan to defend the Luleå River had progressed significantly and the availability of a number of cannon from the Navy was the final decision to move the plan into its final stage. In the early 1960s, work began on a number of installations, or Forts as they were called, which were built into the Lapland mountains to defend the Swedish northern borders.

Mining and excavation for the Victoria Fort began and the majority of the building work was completed in secret. It was probably no coincidence that the emplacements were built at the same time as several new hydro-electric dams. The dams were located up and down the Luleå River and the incredible logistics involved in building them would have created excellent cover for the Fort’s construction from spying Eastern eyes.

The Fort was built to accommodate up to 140 soldiers with enough food to last them many months. It was designed to withstand gas attacks and atomic bombs and was even equipped with its own diesel-driven power system, should the external electricity supply be disabled. The Fort was occupied until the early 1990s and, in 1997, a few years after the Cold War ended, the Fort was taken over by the Swedish National Military Heritage Association and turned into a museum.

The Fort is run as a ‘working’ museum by local company Virelvind AB, with accommodation for up to 30 guests who can experience how life was for the soldiers who staffed the installation for three decades. There are six ‘cabin style’ sleeping rooms with 6-12 beds per room and a fully certified kitchen, conference room and full shower and toilet facilities. Catering can be provided by local, professional companies offering an extensive range of locally-produced food. Bar facilities can also be arranged, if required.

The Fort is the only one of its kind left in Sweden to accommodate guests. All the furniture, equipment and even the paint on the walls is original. For visiting groups who would like to combine training and conference facilities with the opportunity to add adventure trips, the Victoria Fort offers an original and exciting experience in Swedish Lapland.