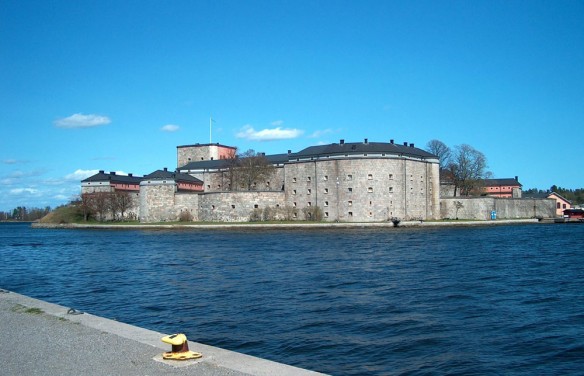 Visitors in the museum studying a wall describing the Russian attacks against the Swedish east coast, in the summer of 1719.

The fortifications of Vaxholm, sited on the northern approaches to Stockholm, comprised the Vaxholm Citadel, the Rindö Redoubt, and the fortifications at Fredriksborg and Oskar-Fredriksborg. The Siarö Fort overlooking Furusund Strait completed the area defences. The foundations for the Vaxholm Citadel were laid as early as during the 16th century and the fortresses have on several occasions played a vital role in the defence of Stockholm.  The Citadel was also used as a national prison from the middle of the 1700s until 1842. Fredriksborg Fortress was built between 1724 and 1735, Rindö Redoubt was started in 1858, Oskar Fredriksborg Fortress was brought into service in 1877 and Siarö Fort was built during the First World War.

The museum, which is situated inside the West Wall of the Citadel, shows the military development of the fortifications from the 1500s until the present day. Through models, the surroundings, and displays the visitor will be able to follow the history of Sweden’s coastal defences over the years. The story of the Vaxholm Coastal Artillery Regiment, formed in 1902, is also told. The museum was re-opened in 2003 after an extensive renovation.