The museum offers guided tours in the summer period, both in the exhibitions and on the museums ships moored alongside the museum. Boat tours on weekdays and weekends to various destinations in the Karlskrona archipelago (such as Kungsholmen Fortress, the old Rope Walk on Lindholmen Island and Kurrholmen Fortress). Special group tours can also be arranged to different locations in the archipelago. The museum ship HMS Västervik, a fast attack missile boat armed both with torpedoes and missiles. The boat was active at the naval base until the end of the 1990s. When the Soviet submarine the U-137 ran aground, the Soviet captain was interrogated on board the Västervik. 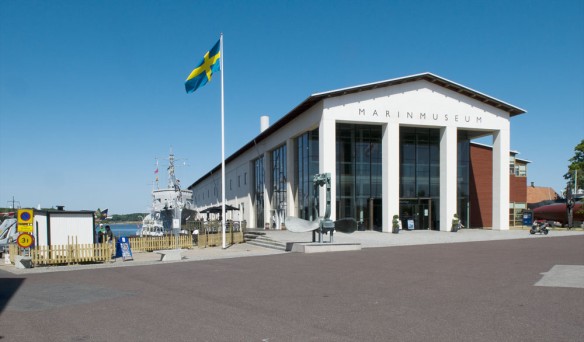 The Naval Museum. To the left can be seen the mine sweeper HMS Bremön, one of the museum’s ships. The Naval Town of Karlskrona was founded in 1680 by King Karl XI as the southern base of the Royal Swedish Navy, due to its central location in the South Baltic and favourable ice conditions in the winter time. A barrier of islands surrounding the city offered the fleet perfect protection. Both islands and mainland were also protected by several fortifications, not least the main inlet which still is guarded by two forts – Drottningskär Fortress and Kungsholmen Fortress. Karlskrona was hence not a “self-grown” town, but a “planned” town, built according to modern town planning and highly valuable architecture, mostly connected to the naval activities. It soon became a well-known European centre for modern shipbuilding, high-class architecture and supreme defence technology. In the 18th century, the Karlskrona Naval Shipyard was Sweden’s largest place of employment.

The Naval Town of Karlskrona is on UNESCO’s list of irreplaceable World Heritage Sites since 1998. A significant change since the Cold War period when the town and its surroundings were closed to all foreigners.

The Royal Swedish Navy’s main base is still situated in Karlskrona, which reflects how well-placed the naval base was, and still is.

THE NAVAL MUSEUM IS LOCATED IN THE HISTORIC HARBOUR AREA

The museum is since 1997 located in a new building on the island of Stumholmen in a genuine environment filled with naval history. All naval activities on the island were phased out as late as the 1990s.

The Naval Museum tells the naval history from 17th century up until now. Interesting parts of the museum exhibitions are: an extensive model collection of ships, The Galleon Figures Hall, an underwater tunnel (a genuine wreck can be seen if the water is clear) the Dunders Deck (a boat deck and experimentation area for children) and a ship simulator among other things. Other exhibitions concentrate on life onboard in the late 18th century, the power struggle in the Baltic at the end of the 18th century and navigation and ship building over the centuries.

The most relevant part of the exhibitions in terms of the Cold War period is the newly opened permanent exhibition Surface Tension – The Cold War in the Baltic 1979-89 telling the story of last cold decade of the Cold War. In the exhibition you can sit down at four different locations and listen to people who were highly involved during that last decade – both politicians, military and those who simply happened to be at the right location at the right (or wrong) time.

Moored alongside the museum are three museum ships. Two of these were operated during the Cold War period; the fast attack missile boat HMS Västervik (see photo) and the mine sweeper HMS Bremön. The old sailing ship, the HMS Jarramas, was a school ship for young cadets which were operated up until the end of the Second World War. Also located outside the museum is Sweden’s fist submarine HMS Hajen (The Shark), which could operate some hours underwater. In the summertime an additional museum ship is also moored at the museums, the fast motor torpedo boat T 38.

MORE ABOUT THE NEW EXHIBITION: SURFACE TENSION – THE COLD WAR IN THE BALTIC 1979 –89

Submarine hunts in the archipelago, political games at the highest level, superpowers in constant confrontation, East against West – the Naval Museum is focusing on the Cold War and the 1980s.

This major venture takes up the Royal Swedish Navy’s perspective on the final decade of the Cold War but it also focuses on the contrasts between civil and military society in Sweden at the time.

While the Royal Swedish Navy found itself in war-like situations with foreign submarines in the archipelago and constant incidents out in the Baltic Sea, the 1980s were mainly characterized by glamour, fast wealth and a blossoming popular culture. The exhibition contains accounts from those who were there when it happened – at the line. See unique items and learn what led to the Cold War getting colder in the 1980s. Come back with us the tense yet euphoric ’80s.