Open all year. It is only possible to visit the underground military installations on guided tours, which are also available in English. Connected to the battery area are a youth hostel with accommodation, café, kiosk, guest kitchen and sauna. Kayaks and bicycles are available for hire. Groups can order lunch and dinner. There is a restaurant and a food store in the nearby village (open daily in the summer). How to go there: You can get to Arholma by boat or by bus/boat from Stockholm. See the website. Arholma Nord is situated on the northern tip of the island, 20 minutes walk from the harbour. There are no buses or taxis. Luggage can be transported by appointment. The cannon is located in the midst of the beautiful Swedish coastal landscape, a good enough reason in itself to visit the island of Arholma. The drawing shows the underground construction in the mountain, which was necessary to serve the cannon.
1. The cannon (see also the photo on opposite page). 2. The entrance to the battery. 3. Aircraft gun defending the battery. 4. A small radar to pick up enemy units close to the battery.
In order to operate the cannon, there was an entire military community inside the mountain. It consisted of 110 people. They had all necessary facilities so it was possible to survive at least one month in case of chemical or biological attack. The photo on the right is from the central control room where all information was gathered and where targets and precise locations were determined. There were also defence forces outside the battery to combat enemies that might land on the island. 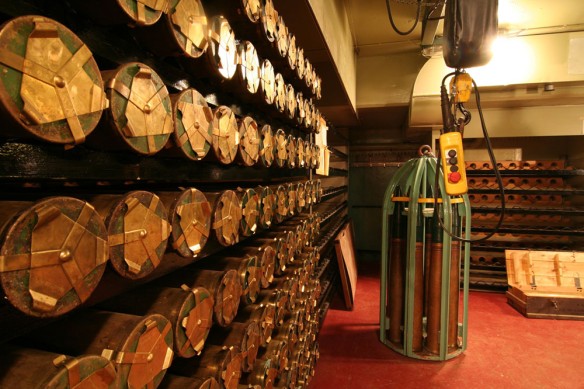 One of the cabins for overnight stays on Arholma Nord. The cabins were originally for the workers who built the gun battery. From the island’s small harbor.

Located in Stockholm’s northernmost outer archipelago, Arholma attracts many visitors, particularly in the the summer. For many decades, the island harboured a well-kept secret that few knew about and even fewer ever visited. Deep inside the rock lies the formerly top secret and relatively modern coastal defence facility of Arholma Battery, at the heart of this archipelago idyll.

On 8 January 2008, one of Sweden’s most secret places was opened to the public. Arholma Battery is now a museum and a tourist facility called Arholma Nord. Arholma Norra and the fortification on Ovanskär formed one of the country’s most important defensive outposts during the Cold War. The two fortresses together made up Arholma Battery. Today the equipment on Ovanskär has been removed and the island restored to its former state. However, the facility on Arholma has been preserved, adapted and opened to the public as a military monument to the days of the Cold War.

Building work started on Arholma Battery in the late 1950s and was completed in 1968. By then, an ultramodern facility over four floors had been carved out of the rock and equipped with the most advanced artillery of the time: a fully automatic 10.5 cm calibre fixed cannon with a range of 20 kilometres. The purpose was, of course, to stop an enemy invasion of Sweden. A crew of around 110, officers and national servicemen, served in the caverns of Arholma. Arholma Battery is part of our shared history and is managed by the National Property