THE ANNA AKHMATOVA MUSEUM AT THE FOUNTAIN HOUSE The pass of «lodger» belonged to Anna Akhmatova. In the 1940-s the Sheremetev’s Palace lodgers’ way home led through a checkpoint of the Stare Institute of Arctica and Antarctica. 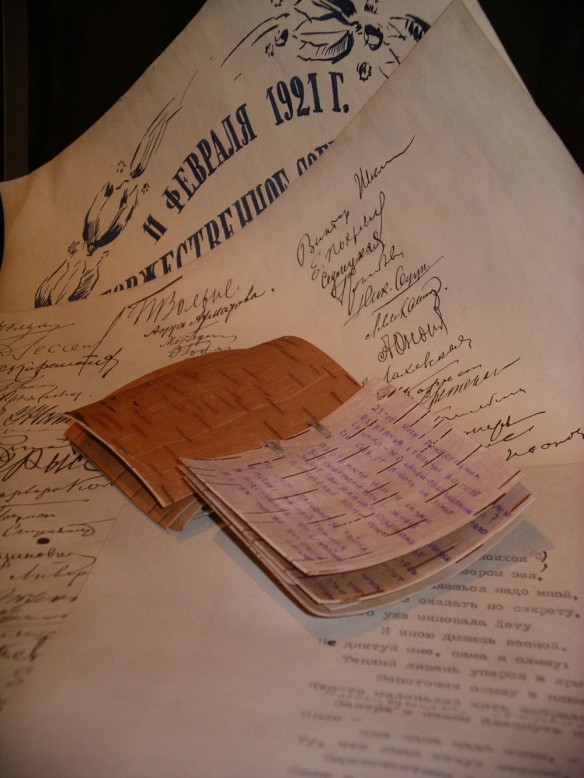 Ash tray belonged to Anna Akhmatova. In the epoch of terror and surveillance burning manuscripts became a usual ritual for Akhmatova. The son of Anna Akhmatova Lev Gumilev was a prisoner in GULAG for more than 15 years.

Changes in the cultural information of this place are interpreted through a communal apartment, the memorial part of the museum. Akhmatova, as well as those who were close to her, shared the tragic fate of much of Leningrad’s intelligentsia. In 1921, Akhmatova’s first husband, the poet Nikolai Gumilyov, was shot on the orders of Cheka. Their son Lev would be arrested more than once – in 1933, 1935 and 1938. Nobody was safe. Expecting to be arrested and have her home searched at any time, she destroyed her poems, in which her deepest and genuine feelings were expressed. Reserved in her everyday life, Akhmatova was an outspoken poet.The literary memorial museum of Anna Akhmatova at Fountain House was opened in the southern garden wing of the Sheremetevs’ palace in 1989. Several decades of Akhmatova’s life are closely connected with this place. It is considered unique in the St Petersburg area. The emblem of the Sheremetevs can be seen at the northern palace gates with their motto: “Deus conservat omnia” or “God preserves everything”. Various periods of St Petersburg’s history exist in parallel among the trees of this garden : the brutal and heroic events of Peter the Great’s time and the masquerades of Elizabeth’s époque, the shadows of the Golden and Silver Ages of Russian Literature and the banality of the Soviet period.

This museum is, however, the Poet’s House first and foremost and so the display needs to be polysemantic and multifaceted. The display combines a reconstructed communal apartment from the time of Akhmatova and a literary exhibition in an adjoining classical rotunda. In the memorial section, which looks like an installation from the Soviet period, visitors are encouraged to look at photograph albums, listen to recordings of the poet’s voice and handle some of the objects. The literary display uses new visual language to create a model of Akhmatova’s world. The museum is also well-known as a cultural centre, and organizes special programs for children and youth.