The Exhibition Centre is located near to the VDNK Metro Station. VDNK is the abbreviation for The Exhibition of National Economic Achievements. Worker and Kolkhoz Woman. The 24.5-meter-high and very famous sculpture in Socialist realistic style was made from stainless steel in 1937 for the Soviet Pavilion at the Paris World Fair (photo). It was later moved to Moscow. The worker holds a hammer and the Kolkhoz woman a sickle. The sculpture was taken down in 2003 for restoration. It is not known when (or indeed if) it will return. The Peoples Friendship Fountain, with girls in national costumes from the former republics of the Soviet Union. They are made of bronze and gold-plated. The main entrance built in 1954. A kind of triumphal arch, monumental and classical in style. The columns feature large reliefs of people living and working in the countryside. The sculpture on the top shows a kolkhoz woman and a tractor driver. The Uzbek pavilion built in 1939. An original building of beauty and elegance. It has been appointed as an historic and national monument of historic significance. The Central Pavilion was built in 1954. The monumental building is 100 metres high including the spire. The building is decorated with many Communist symbols and sculptures, such as the groups with kolkhoz farmers on the top. The architectural style can be described as traditional Soviet classical architecture from the 1950s. The main entrance is decorated with a large bronze relief with flags and Communist symbols. It has been appointed as an historic and national monument of historic significance. Note that the special light stands are designed as sheaves. The exhibition was originally built for agricultural products. 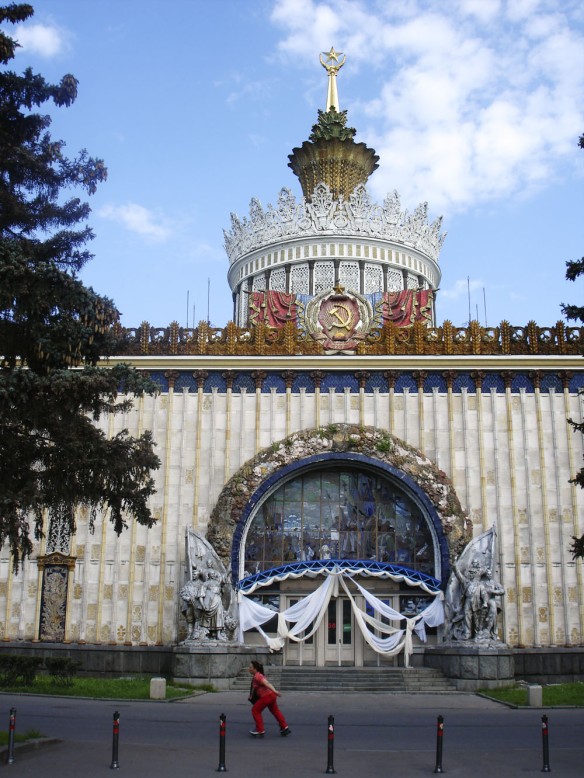 Ukraine’s pavilion built in 1938 with the use of national architectural components. A very special building with many interesting details. The facade is finished in Ukrainian majolica tiles. The entrance is abundantly decorated. A decorative ceramic wreath frames the entrance. A crown with a sprout interwoven with flowers and herbs is part of the building’s top decoration. It has been appointed as an historic and national monument of historic significance.

The All-Russian Exhibition Centre is worth visiting because of its architecture, the many Communist symbols and the atmosphere from the Stalinist period. It is a large permanent exhibition area opened in 1938 with pavilions in the traditional Soviet architectural style as well as buildings inspired by local architecture from the former Soviet republics.

The area is also worth a visit because it has evolved into one of Moscow’s most popular recreation areas, not least because of the enormous asphalt areas ideal for all kinds of roller skating and cycling.

In the beginning it was only an agricultural exhibition, and so there are many agricultural symbols and sculptures. The exhibition was opened after years of delays and arrests of the planning team. The original idea was that all buildings should be in wood, like most buildings in the countryside, but a commission decided that it did not suit the present ideological direction.

The exhibition opened with 250 pavilions over 136 ha and 4.5 million visitors (1940). Industrial and building exhibitions moved in after the Second World War.

Today the area is administered by a state joint-stock company and is a mix of exhibitions, shopping centres, street markets, cinemas, amusements, cafes etc.