The cemetery is located 20 km north of the centre of St. Petersburg and can be reached by train and bus (or taxi).

9:00-18:00. A small museum is located in the former guard building, to the right after the entrance. 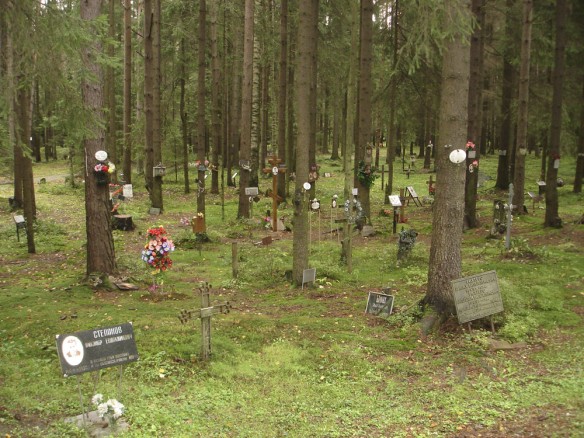 Levashovo Memorial Cemetery is not an ordinary cemetery but a fenced piece of forest in which the executed people were buried. The site has a unique atmosphere. There are no dominating memorials or changes of the original forest inside the area. It is not known where each person is buried. The forest is dominated by private people’s more than 700 small memories such as iron and wooden crosses, stones, signs with names and texts, flowers and photos, all spread out on the forest floor or placed on trees. The area also contains many small memorials to nationalities such as the Poles, Germans, Finns, Norwegians, Estonians, Latvians, Lithuanians, Belarusians and Ukrainians as well as religious groups such as the Jews, Catholics and Russian Orthodox people. The entrance. The burial sites of the executed people were well protected and kept in deep secrecy. The victims were buried at night. The cemetery was surrounded by a high wooden fence with barbed wire. Inside there was a path for watchdogs. A sketch made by the secret police, KGB, of the area, with years and numbers of the executed and buried people, in total 19,450.

BURIAL PLACE OF AROUND 20,000 EXECUTED PEOPLE

The Levashovo Memorial Cemetery was the burial place for people executed by the KGB over the period 1937 until 1954. The executions took place in prisons in the city and the bodies were then brought, at night, to mass graves at the burial site. It is estimated that around 50,000 people were executed in St. Petersburg over the period, of which around 20,000 are buried here.

THE YEARS OF STALIN’S GREAT TERROR

Most executions took place in the years of Stalin’s Great Terror between 1937 and 1938. The actions were led by Stalin himself together with national and regional leaders of the KGB. It was a large-scale attack with the main objective of putting an end “once and for all” to social unrest and the presence of enemies in the Soviet Union. The action was directed at such “enemies of the people” as kulaks (independent farmers), former opponents (priests, White Army officers, Communists with different views than the Stalinists), religious practitioners (mainly women), so-called border minorities (Germans, Latvians, Finns, Greeks, Romanians and Estonians), wives of “enemies of the people”, immigrants to the Soviet Union and rail and transport workers (who had contacts with foreign countries).

An example: An old lady, Aleksandra Petrovna, who sold flowers at a cemetery, was arrested and shot because she told some people about the night burials and thereby “spread rumours”. It was decided from Moscow how big the quota of arrested local people should be. The first order from Moscow to the St. Petersburg Region (Leningrad Region) “ordered” 4,000 people to be executed by shooting and 10,000 people to be sent to GULAGs. Some 65,000-75,000 people were probably arrested in St. Petersburg during the years of Stalin’s Great Terror between 1937 and 1938. At that time the city could be characterized as a multinational city, as reflected in the lists of arrested people, which comprised no less than 65 different nationalities. 18% of those arrested were people from foreign countries. Stalin considered foreigners to be potential spies.