Lubyanka. Headquarters and prison of the KGB. Memorial to the victims of the KGB. Address: Lubyanka Square. 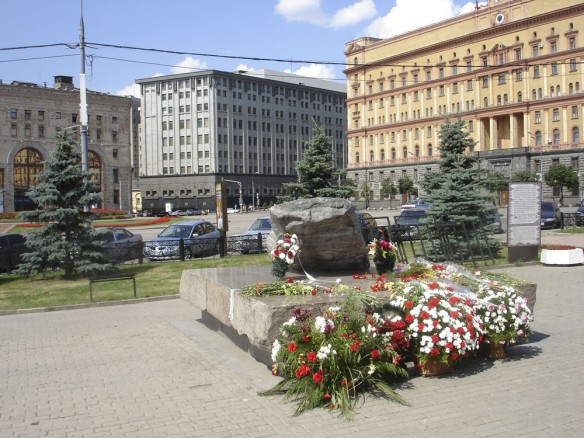 Lubyanka. Headquarters and prison of the KGB. Address: Lubyanka Square. In front of the headquarters: a memorial to the victims of the KGB has been raised by the human rights organisation MEMORIAL. The main text on the memorial plaque says: “During the years of terror, over 40,000 people were shot in Moscow on groundless political charges. Their bodies were buried in the cemetery of the Yauza Hospital (now Hospital 23) from 1921-1926, at Vagankovo cemetery from 1926-1935, and cremated at the Moscow (Donskoi) Crematorium from 1934 until at least the early 1950s. Beginning in 1937, two NKVD (KGB) execution sites in Moscow neighbourhoods (Butovo and Kommunarka collective farms) were used as burial places”. The stone is from Solovetsky Island by the White Sea, the location of one the worst prison camps (later a prison). According to the writer Aleksandr Solzhenitsyn, this camp was the “mother of the GULAGs”. The monumental yellow building to the right was the main building of the KGB, which also owned many of the neighbouring buildings. Secret police heads from Beria to Andropov had the same office on the third floor and could look down at the statue of the KGB founder, Felix Dzerzhinsky, on the square (removed in 1991 to the “Graveyard to Fallen Monuments”). The Lubyanka Internal Prison was situated in the courtyard of the building. It was probably one of the most infamous prisons in the world. Prisoners were shot in the courtyard during the Stalinist period. Those arrested were brutally interrogated in the basement. Today it is the headquarters of the Border Guard Service, a directorate of the Federal Security Service. The large dark building in the background is the actual headquarters of the secret police. 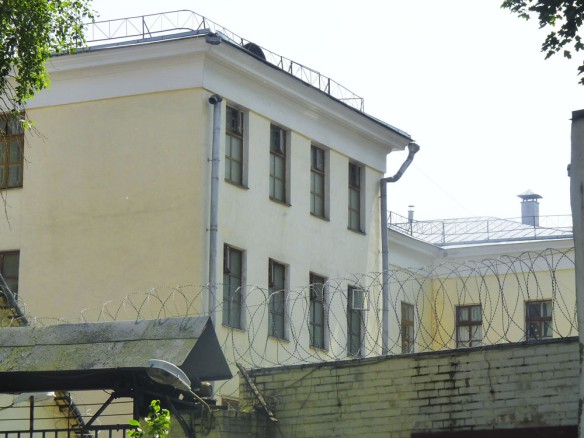 Moscow Serbsky Institute. Address: Lane. Kropotkin, 25/17 (north-east of the Kremlin). “No sane person would declaim against the Soviet government and communism”. This statement was the reason why many dissidents were treated in psychiatric hospitals. Moscow Serbsky Institute in central Moscow was the main hospital in Russia for the psychiatric treatment of dissidents. Many of the psychiatrists had high positions in the state security service. The diagnosis “sluggishly progressing schizophrenia” meant that the person had “ideas about a struggle for truth and justice formed by a personality with a paranoid structure”. At least 365 people were hospitalized because of “politically defined madness”. The treatment included electric shock treatment, electromagnetic torture, enforced medication and beatings. Many survivors suffered serious mental and psychical harm. Nikolskaya 23, near the Lubyanka Square. Photo from 1936.31,456 death sentences from Stalin’s Great Terror were signed in this building between 1937 and 1938. the building has now been sold to a private investor and is in danger of being demolished. The first KGB building in the area. Address: 11-13 ulitsa Bol. Lubyanka (the corner of ploshchad Vorovskogo). The KGB established its headquartering in this building in 1918 when it moved from Leningrad/St. Petersburg to the capital Moscow after the revolution. The Yauza Hospital. Address: 9-11, Yauzskaya St. The cemetery of Yauza Hospital was used for the victims of Stalin’s Terror in his first years of power after Lenin’s death from 1921 until 1926. These were largely people that Stalin regarded as potential political enemies. Doctors at the hospital drew up false statements in which the death was justified by disease. Go left from the main entrance to find a memorial stone.

The text describes some key buildings from the Communist era in Moscow, the real center of the Soviet Union, especially some of the buildings and institutions connected to Stalin’s Great Terror, not least the administrative buildings connected to the secret police KGB (former also known as the Cheka, OGPU and NKGB). It also involve the hospitals and psychiatric clinics at which criminal acts were performed after orders from the KGB.