Moscow State University. Located in the south-west of the city at Sparrow Hills.

State Kremlin Palace. Located inside the walls of Kremlin. 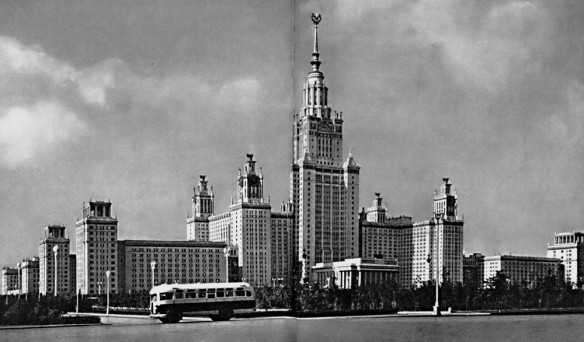 Moscow State University. Located in the south-west of the city at
Sparrow Hills. Moscow has seven of these Stalinist-Gothic building
complexes, also known as the “Seven Sisters”. The others are: the
Hotel Ukraine, the Kotelnicheskaya Embankment Apartments, (The human right organisation MEMORIAL, Moscow, Russia).
the Kudrinskaya Square Building, the Hotel Leningradskaya, the
Ministry of Foreign Affairs and the Red Gates Administration. They
were all built between 1947 and 1953. 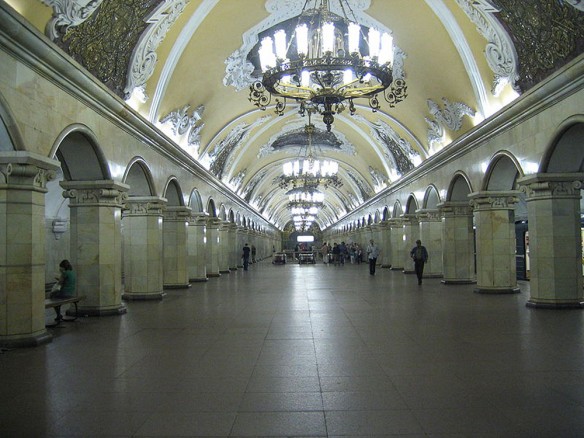 Komsomolskaya Metro Station. Some of the oldest metro
stations in Moscow are architectural and artistic monuments with
sculptures, lavish mosaic floors and walls, as well as chandeliers.
Some of the finest are: Teatralnaya, Ploshhad Revolyutsii,
Novokuznetskaya, Park Kultury, Kropotkinskaya, Kievskaya,
Mayakovskaya and Belorusskaya. 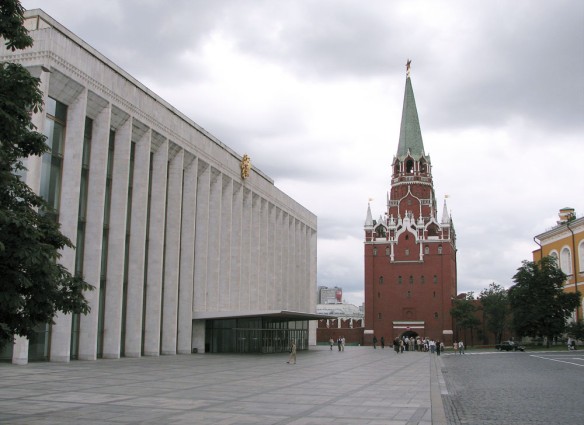 State Kremlin Palace. Located inside the walls of Kremlin. The
building is also known as the Kremlin Palace of Congresses due to
the Communist Party congresses that were held in the building as
well as other mass state events. The Soviet leader Nikita Khruschev
personally supported the construction of the building finished
in 1961. It is remarkable how little the building is architecturally
incorporated into the historical Kremlin environment. Several
valuable old buildings at the site were demolished, including two
monasteries.
Only half of the building volume is above ground. There are
more than 800 rooms and seating for 6,000 people in the main
meeting hall. Today it is mainly used for concerts and ballets.

The Moscow State University is similar to many other enormous Soviet building complexes, not only in Moscow but for example also in Warsaw and Riga. The style of building is known as Stalinist architecture, Stalin’s Empire or Socialist Classicism. The buildings were decorated with Communist and popular symbols.

Many of the Moscow Metro stations are extraordinary ornate buildings with an abundance of architecture details in many styles as well as Communist and popular symbols.