3-y Donskoy proyezd. The Cemetery is located in the centre of Moscow, 7 km south-east of the Kremlin.

Remark: The cemetery is also called the New Cemetery of Donskoy Monastery and should not be confused with the neighbouring and much bigger Old Donskoy Cemetery, with Donskoy Monastery. The new cemetery is located south-east of the old one and a few minutes’ walk from the monastery. 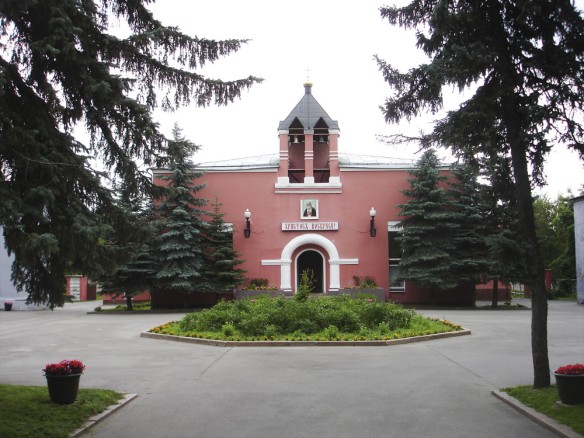 Donskoy Crematorium was built in 1927 as the first crematorium in Russia. It was closed in 1973 and rebuilt in 1990 as a church. Executed victims of Stalin’s Terror were burned and buried here from 1935 until 1953. Mass grave number one. The grave is supplemented with individual gravestones placed by the descendents of the victims, and forms a personal and strong memorial. The grave was the first to be identified when the search for the mass graves was permitted in Russia in the late 1980s. Mass grave number one is also the oldest of the mass graves at Donskoy Cemetery. On the memorial stone is engraved the following text: “Here lie buried the remains of the innocent tortured and executed victims of the political repression of 1930-42. May they never be forgotten”. A memorial book placed by mass grave number three with the names of more than 5,000 identified victims that are known to be buried here. Because of prohibited access to the KGB archives, it is very difficult to find the exact names of the rest of the victims. Mass grave number three, in use from 1945 until 1953. It is the grave of the latest executions, among them many foreigners. The memorial stones in the background were erected in memory of the German, Chinese and Japanese victims, among others. More than 900 Germans were executed between 1950 and 1953. This grave also contains the ashes of the KGB chiefs, Yagoda, Yezhov and Beria, who were all primarily responsible for the terror and mass executions from 1935 until 1953. All of them were executed. Yagoda and Yezhov by their former chief and close collaborator, Stalin. Beria by the supporters of Nikita Khrushchev, who was to follow Stalin as leader of the Soviet Union. One of Stalin’s main judges, General Blochin, has his family grave here, a few metres of the mass graves. He was a member of the three-person committee that signed the execution orders and was also the head of the execution commandos.

THREE MASS GRAVES WITH ASHES FROM VICTIMS OF STALIN’S TERROR

Donskoy Cemetery is one of the main burial places for people killed by the Stalinist regime from 1935 until 1953, especially in the years of the Great Terror of 1937 and 1938. These were people shot or tortured to death in Moscow’s main KGB prisons, the Lubyanka and Butyrka. The bodies were brought to Donskoy Crematorium at night and burned. The ashes were dumped into nearby pits, now known as mass graves numbers one, two and three.

The Great Terror were planned and directed by the dictator Josef Stalin himself and the KGB head, Yetzov, later executed when he fell out of favour with Stalin. He is also buried here at Donskoy Cemetery.

It is estimated that around 10,000 people were burnt and buried at Donskoy Cemetery during the Great Terror. The objective was to put an end “once and for all” to “enemies of the people”, which included independent farmers (kulaks), political opponents, alleged followers of the Tsarist regime (named “former people”), Communists with different political views to Stalin (“opponents”), wives and families of “enemies of the people”, priests and other religious practitioners as well as foreigners from many countries (“potential spies”).

Around 40,000 people were killed in Moscow under the Great Terror and at least 700,000 in the Soviet Union as a whole. In addition, approximately one million people were sent to GULAGs, mostly for 10 years.