The village of Butovo. Is located 27 kilometres south of Moscow and near the Podolsk Highway. The area is surrounded by a high wooden fence with barbed wire. A new large white stone church is built outside the memorial area.

From a panel next to the entrance. Secret Police photo’s of the victim’s that were executed and buried at Butovo Shooting Range. More than 20,000 people were killed here between 1935 and 1953, nearly all of them in the years of Stalin’s Great Terror in 1937 and 1938. 96% of the victims were men, 4% women. 18 were over 75 years of age and 10 were 15 years or younger. People from no less than 90 countries were executed and buried here. 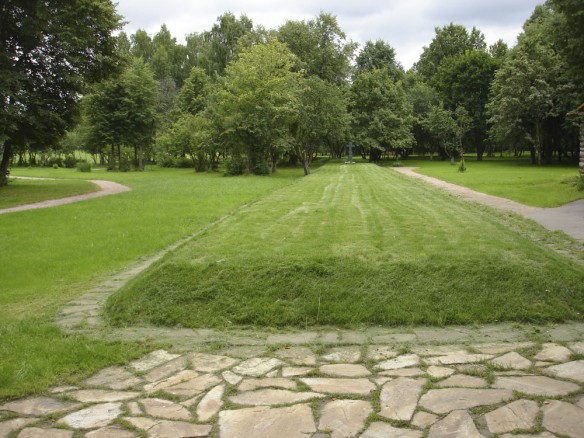 The mass graves are indicated with grass-covered mounds A wall with memorial plaques inscribed with the names of the executed people. There are still apple trees on the site from the period when the area was used for gardening by KGB officials. When the Butovo estate was taken over by the KGB after the revolution it was used for the production of vegetables for the KGB officials. The field workers were prisoners accommodated in the former estate stables. This work continued after the Second World War. Then the KGB officials were also allowed to build small cottages with kitchen gardens (datchas) on a part of the grave area, but it was not permitted to dig foundations or cellars because of the mass graves. The mass grave area was also used for strawberry production. A small wooden church is built on the area because of the approx. 1,000 Russian Orthodox priests that were killed here. 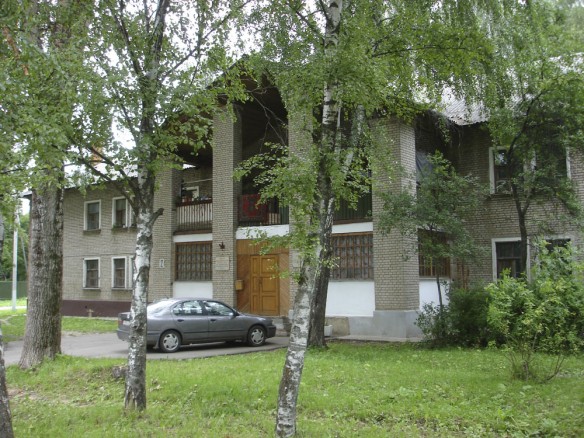 A building located just outside the memorial site and constructed by German prisoners of war. Until the fall of the Soviet Union, the building functioned as an international school for the KGB in which people from foreign countries were educated in secret activities. Today it is used by the Russian Orthodox Church.

BUTOVO: FROM A LANDLORD’S ESTATE TO STALIN’S MASS GRAVES

Butovo was a former estate south of Moscow taken over by the secret police after the revolution and used as an agricultural colony, shooting range and site for executions and mass graves. The executions took place here from 1935 to 1953, but mostly in the years of Stalin’s Great Terror in 1937 and 1938. Butovo Shooting Range is known as Moscow’s main killing field and, among religious people as Russia’s Golgatha. The Great Terror were planned and directed by Stalin himself and the KGB head, Yetzov. The objective was to put an end “once and for all” to “enemies of the people”.

From the archives of the KBG it can be seen that at least 20,761 people were killed and buried here, perhaps far more. The enemies of the people included independent farmers (kulaks), political opponents, alleged followers of the Tsarist regime (named “former people”), Communists with different political views to Stalin (“opponents”), wives and families of “enemies of the people”, priests and other religious practitioners as well as foreigners from no less than 60 countries (potential spies). Poles, Balts and Germans constituted the majority of foreigners. Many of them came to Russia to study and support the Communist regime. The foreigners were shot without trial. An American victim had brought his family to Russia “to educate his sons as Communists”. The families of foreign people received false death certificates from the Soviet embassies with false dates and reasons for death, such as “TB of the lungs”.

Those convicted were transported by night from central Moscow in food vans marked MEAT. The executions and burials took place through the night. A rare eyewitness from the KGB, a former commandant of Butovo, has reported how they were gathered together in a stone building from where the executioners took them one by one to the edge of the grave and killed them by a shot in the nape of the neck. At dawn a bulldozer would cover the bodies. The executioners had free access to vodka as well as eau-de-cologne to remove the spell of blood and gunpowder. The executioners came from the KGB in Moscow. They all received service medals such as the Order of the Red Banner and the Order of the Red Star as well as high pensions.

The 16 months of Stalin’s Great Terror accounted for at least 700,000 death sentences. Approximately one million people were sentenced to 10 years in a GULAG camp.