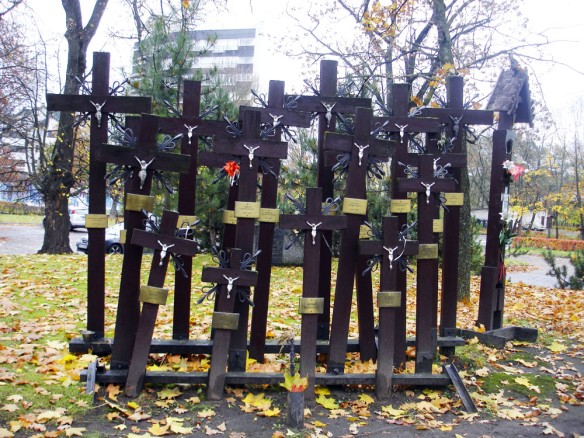 Soviet military in front of the Radio and Television Committee Building. Fourteen people were killed and more than 700 injured by Soviet military and security forces in Vilnius in January 1991. The Soviet military forces went into crucial action in January 1991. The fiercest attack on independence supporters took place at the Radio and Television Committee Building and the TV Tower on 13 January. 13 freedom defenders were shot, one died of a heart attack and a Soviet soldier was shot by a fellow soldier. The following day after this Bloody Sunday, 100,000 people surrounded the parliament and built anti-tank barricades. The Soviet forces retreated.

Lithuania had already declared independence of the Soviet Union in March 1990. The following period was difficult with a weakening economy, energy shortages and high inflation because of economic blockade organized by the Soviet Union. Food prices increased and some products were rationed. The political situation was unstable. The Soviet leaders in Moscow and pro-Soviet groups in Lithuania were dissatisfied with the proclaimed independence, especially the Russian-speaking minorities, supported by the Moscow-backed sector of the Lithuanian Communist Party. The new government then called on supporters of independence to protect the parliamentary building and other important public buildings, including radio and television centres. Hundreds of thousands of people all over the country responded to this call.