The corner of Gedimino ave. and Aukų str. Vilnius.
The building also houses The Museum of Genocide Victims, Aukų str. 2A.

Tours on the museum and in the prison can be arranged in Russian and English. Book in advance is recommendable. The lower part of the building is carved with the names of anti- Soviet resistance fighters who were executed in the building during the Soviet occupation. 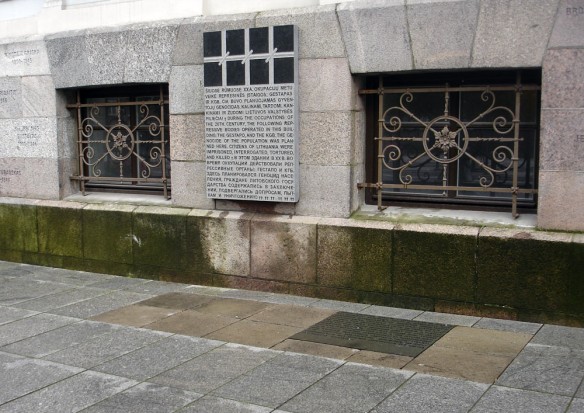 The execution cell in the basement of the building. More than 1,000 people were executed here between 1944 and the early 1960s. Most of them were buried in a mass grave in Tuskulėnai on the outskirts of Vilnius. See below. Findings from the mass graves of executed people such as glasses, rings, buttons, shoes etc. are exhibited under the glass floor that protects the original floor. A cell with soundproofed walls to prevent the cries of tortured victims from being heard. The straitjacket was used for immobilising the victims, if they resisted. The floor of this cell was filled with freezing water. The prisoners had to balance on the small platform in the middle of the cell until they fell into the water because of fatique. It was impossible to sleep in this cell. Memorials in front of the KGB building. In the background on both photos can be seen non-deciduous trees planted by the KGB near to the building in order to reduce the view through the A monument for the Lithuanian victims of the Communist regime. The stones are from the different regions of Lithuania. 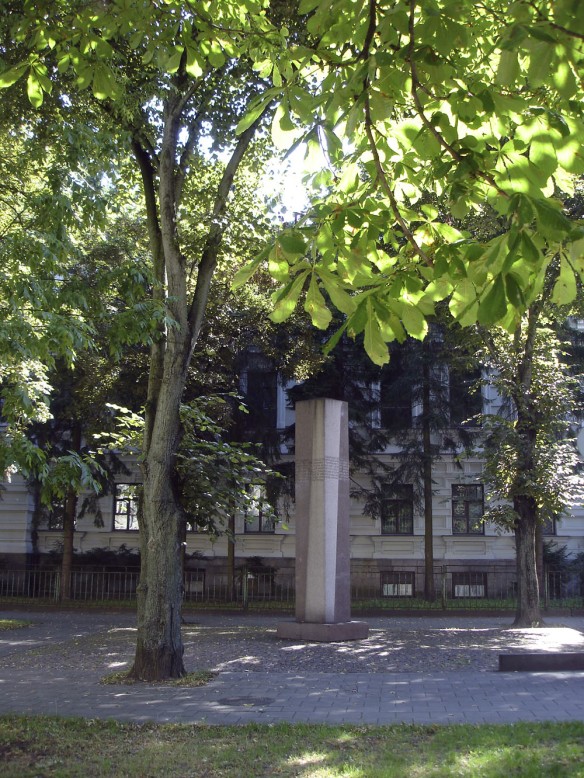 A monument for the people deported to the Lapsev Sea region north of the Polar Circle in Siberia. The monument stands in front of the entrance to the Museum of Genocide Victims.

A BUILDING THAT RECOUNTS THE MOST RECENT LITHUANIAN HISTORY

The main part of the building located in the centre of Vilnius dates from 1899. Some of the annexes were built later. The historical function of the building demonstrates the complicated and horrible nature of Lithuania’s most recent history:

The prison in the basement of the building is as intact as it was in 1991 when the KGB left. It is authentically furnished. Today there are 19 cells in the KGB prison in the basement plus the guards’ rooms, the search rooms, some torture cells and a courtyard for prisoner exercise. Small thematic exhibitions are on display in some cells.

The prison was originally larger, 50 cells, but many were used for the KGB archives in the 1960s.