The Green Bridge, Neris River, Vilnius. Kalvarijų gatvė and at the end of Vilniaus gatvė. 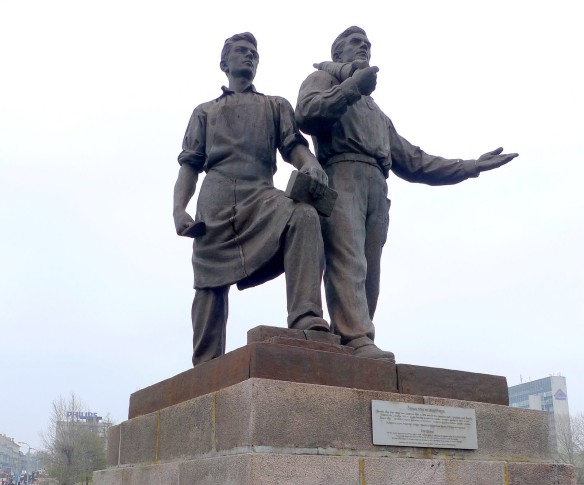 Industry and Construction. This and the other sculptures has now been removed from the bridge. 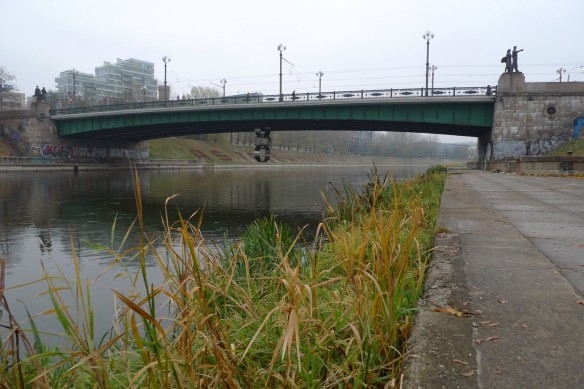 The bridge that was burst by Germans in 1944. This bridge was painted green and known as the Green Bridge. From here comes the name of the existing bridge. 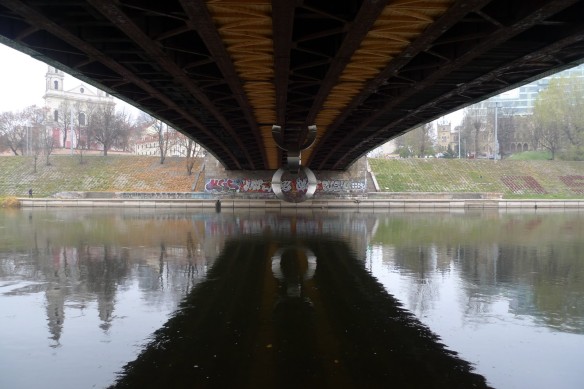 Underneath the bridge can be found the contemporary work Chain by Kunotas Vildžiūnas.

The bridge was built in 1952 to replace a bridge that had been destroyed by the Germans in 1944. It was painted green and known as the Green Bridge.

The existing bridge was planned by the Leningrad Institute of Planning and built by a Russian unit of engineers. It was named after the Soviet General Ivan Chernyakhovsky but, following independence in 1990, the bridge reverted to its old name..

THE SOVIET SCULPTURES NOW REMOVED FROM THE BRIDGE

The bridge used to feature four sculptures in the Soviet realistic style. Each comprised two people representing a social class idealized by the Communist authorities: soldiers, workers, farmers or students. These sculptures were entitled: Guarding Peace, Agriculture, Youth and Education and Industry and Construction. This is the only Communist monument left in the centre of Vilnius.

Some said Vilnius should keep the Green Bridge statues as a reminder of its communist history, however painful; others insisted that they represented Soviet propaganda and were therefore an insult to the nation.

The sculptures were removed from the bridge in 2015 by Vilnius City Hall. The official reason was that they needed to be repaired because of their deteriorating condition, being all corroded.

Rumour has it they will never return. Russian-speaking Lithuanians in particular are upset at plans to remove Soviet-era monuments because they are a part of Lithuanian history.

The mayor of Vilnius has replied: “The statues represent a lie. Their heroic portrayal of the Soviet people – that is all a lie … The statues are a mockery of the real people who had to live during the Soviet period.”