Totorių gatvė 25, in front of the Ministry of Defense of Lithuania. (Vilnius Old Town). 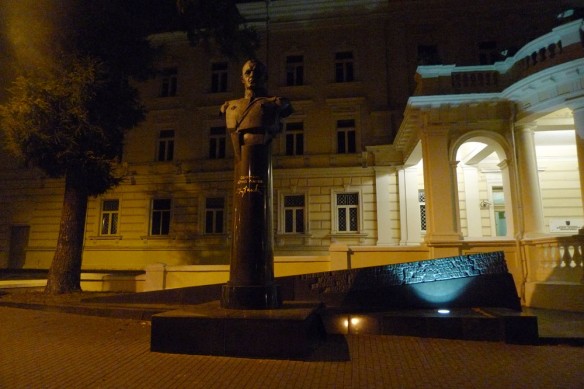 Memorial to Jonas Žemaitis in front of the Ministry of Defence (Johannes Bach Rasmussen). PARTISAN LEADER AND THE FOURTH PRESIDENT OF LITHUANIA

Jonas Žemaitis became leader of the armed partisan movement in Lithuania. He was elected chairman of the Presidium of the Council of the Movement of the Struggle for Freedom of Lithuania. This council was, following Lithuania’s independence, approved as the country’s legitimate government during the Soviet occupation. In 2009 he was therefore officially recognized as the fourth legal president of Lithaunia at the time when he was the leader of the partisan movement. He also awarded the rank of Brigadier General.

ARREST AND EXECUTION IN MOSCOW

He was arrested in 1953 and sent to Moscow at the demand of Lavrenti Beria, leader of the Ministry of Internal Affairs. Beria offered him his freedom if he would co-operate. He refused and was subsequently executed in Butyrka prison in Moscow and buried at the Donskoy Monastery.

He’s last words in the court was: “I, as well as the followers of mine, think that the Soviet Union with the armed forces invaded our country. I consider this behaviour of the Soviet Government unauthorised… All underground activities against the Soviet Government a participant of which I was I consider right and not illegal. I just want to stress that as much as I commanded to the Lithuanian Movement for Freedom I made every effort to keep to principles of humanism. I didn‘t allow any brutal activities. I know what the sentence of the court will be. I still believe that the struggle I have led for nine years will bring its results”.

In 1946, when he was active partisan, he’s wife Elena died and left their 5-year old son Laimutus. Jonas Žemaitis last wish in the court was to see his son for the last time but it was denied. In 1997 Jonas Žemaitis received the highest Lithuanian awards, the 1st class Medal of Vytis Cross.