Must be booked in advance. “On the paths of the Partisans“. Visit to reconstructed partisan bunkers. By bus, 3-4 hours. Christmas Eve of the prisoners in a GULAG camp in Taishet, Irkutsk region, 1955. The Museum arranges visits to several nearby reconstructed underground partisan bunkers in the forests. The remains of a bunker before reconstruction, Norulių forest (Dzūkija National Park). The bunker after the reconstruction in 1997. The bunker is approximately 6 square meters and was the hiding and living place for 4 partisans. The bunker was discovered by Soviet security forces and destroyed in 1947. All 4 partisans were killed. Gintautas Kazlauskas at the Druskininkai Museum of Resistance and Relics of Deportations. Anastazija and Antanas Kazlauskas with their son Gintautas. Lithuania,1948, when the family was united after Anastazija’s escape from Siberia with her son. A year later, she was jailed for three years and then sent back to Siberia. 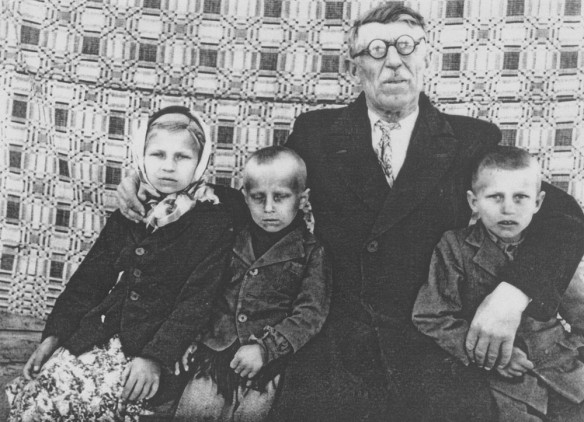 Adomas Akstinas travelled from Lithuania to visit the family of his son, who was deported in 1948. He is here photographed together with his grandchildren in Birikchul, Krasnoyarsk region, 1954.

THE REGIONAL HISTORY OF RESISTANCE AND DEPORTATIONS

The museum is founded by former deportees and functions on a voluntary basis. It concentrates on the regional history and focuses on three topics:

The museum is involved in the regional development of memorials for the partisans, including the reconstruction of partisan bunkers and thematic tours for visitors.

THE ARMED RESISTANCE. LARGE LOSSES IN THE DISTRICT

The exhibition of the armed resistance is limited to the region of Dzukija, in which the Dainava Partisan District was founded. It was one of the nine military partisan districts in Lithuania. The Lithuanian partisan movement was quite well-organised and effective compared to many other Soviet occupied countries. The organisation was based on the principles of the Lithuanian army from the independence period before 1940.

The first partisan unit in the area was formed in 1944 and the armed resistance came to an end in practice in 1954. It is estimated that 2,000 partisans were killed in the district. The largest losses occurred in the first years, 1944-45. Most partisans were found and executed with the help of infiltrators.

THE DEPORTATIONS TO CAMPS AND ISOLATED REGIONS

People were deported as:

The deportees from the post-war years came mainly from the countryside. The objective was to weaken the partisan movement and force people to join the collective farms. It is not known how many people were deported from this region but, from one village, Viršurodukis, 26 out of 96 inhabitants were sent away. After 1956, when people were allowed to return to Lithuania, around 1,000 people returned to Druskininkai. Many were people deported from other parts of Lithuania but it was easier for them to settle here because of a need for workers and the expanding regional development.