The center is located 4 km north-east of Paldiski. Turn right 1 km before the town. There is no access to the former submarine centre area. A small exhibition can be seen in the entrance building. The new large building around the sarcophagi and some remains such as a tall chimney can only be seen from outside the fence. The site is managed by A.L.A.R.A. AS, a state-owned company involved in nuclear radioactive waste management and pollution cleaning. The old building where the two submarine mock-ups were installed for educational use. The building was also called “the Soviet Pentagon” by the locals. Photo from 1995. The new building for the sarcophagus with the reactors. One of the sarcophagi inside the building. The stateowned company A.L.A.R.A. Ltd. has the task of keeping the sarcophagi safe for 50 years. They will then be decommissioned. 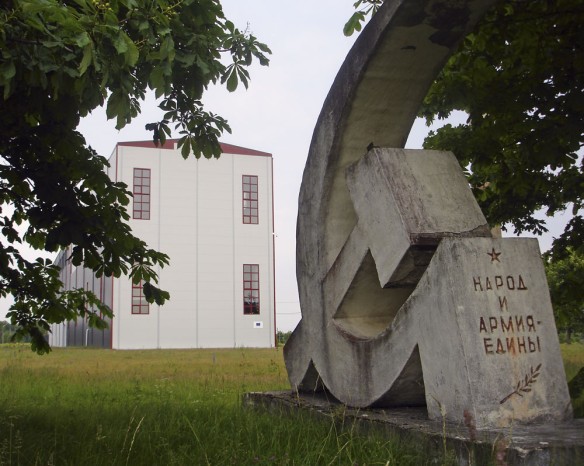 Soviet sculpture on the area.

PALDISKI. A CLOSED MILITARY TOWN IN THE SOVIET PERIOD

Paldiski is situated 50 km west of Tallinn. It was a closed military town during the Soviet period, with 16,000 military employees. Today the town has 4,000 inhabitants, mainly ethnic Russians.

The main military activity in Paldiski was as a training centre for submarine crew members. Two large submarine mock-ups with nuclear reactors were installed in a big building. It was the largest such facility in the whole of the Soviet Union. The centre was constructed in the early 1960s and shut down in 1989. When the Soviet army left following Estonia’s independence, they removed all non-polluted and secret equipment, including the submarine hulls, but not the sections with the nuclear reactors. They were encapsulated in concrete sarcophagi. When Estonia took over the area in 1995 two main tasks were fulfilled following international co-operation and studies:

Many of the original military facility buildings in the area have been demolished. It is not yet known when it will be economic and practical to start the decommissioning of the remaining reactor compartments. Until then, the reactors are under constant supervision and the area strictly guarded.