Sculpture from the old town square that symbolizes the man who subjugates the nuclear power. View from the old town square towards the sea. 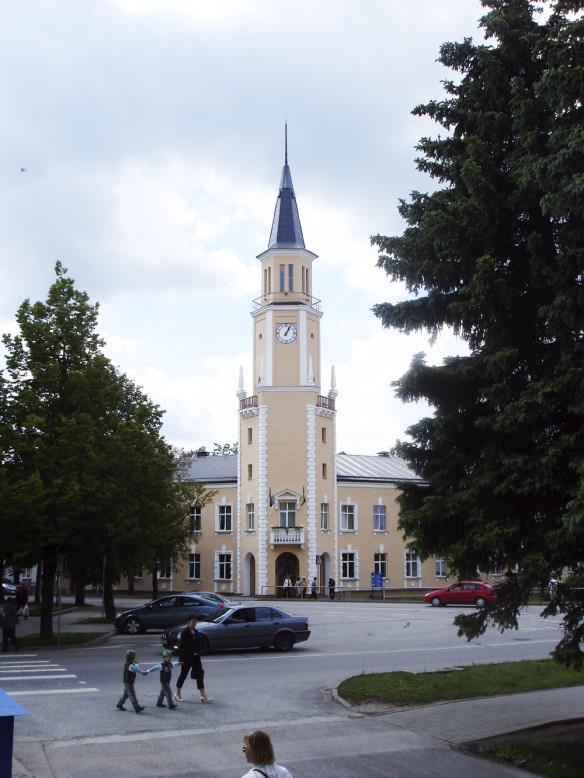 The municipal office on the old town square. It was the intention of the town planners to create a town square inspired by the old Estonian towns. One characteristic of all these towns is a dominant church tower. It was not possible to build a church in the atheistic Communist society so the local municipal office got a “Lutheran church tower” 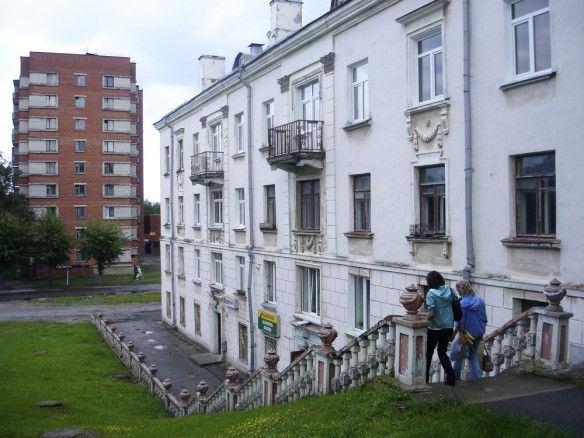 The Cultural Centre on the old square. The cellar is built as a nuclear safe bunker. It is normally possible to gain entry to the theatre building because the foyer is often used for public exhibitions. The theatre, along with many other public buildings, is decorated with Communist symbols and reliefs of Communist leaders.

The exhibition primarily shows the history of the town during the Soviet period, including ordinary life and households and a “red” room with Soviet banners, statues etc.

Sillamäe was built in the 1940s, during the Soviet period, as a “closed town”.

The city was home to the chemical and nuclear industry, especially uranium production. It was a part of the Soviet Union’s military program. The town was run by the military. All its inhabitants were ethnic Russians. Sillamäe did not even exist on maps and had no postal address (some of the code names were Moscow 400 and Leningrad 1).

The production of uranium started in 1946 and it was extracted from black shale, which is widely available in Estonia. The mining had stopped by the 1950s, when supplies began to be imported from Germany and Czechoslovakia. The production was kept secret for decades.

Sillamäe produced over 100,000 tons of uranium for almost 70,000 nuclear weapons. It was here that the uranium was refined for the Soviet Union’s first nuclear bomb. Uranium production stopped in 1990. Today, the factories are focused on producing rare metals and are owned in cooperation with the Estonian State, an Estonian company and some foreign companies.

Sillamäe offers an outstanding picture of Soviet architecture from the Second World War to 1990. Its architecture is the real attraction of the town (it is not possible to visit the large factory complex in the western part of the city).

It is possible to experience typical Soviet architecture from different periods in the different parts of the town. The old town is the most valuable from the point of view of town planning and architecture.

Sillamäe is still a town inhabited by ethnic Russians and it appears as a Russian enclave in Estonia, with a significantly ‘old Soviet’ atmosphere. The majority of signs are in Russian. Some street names would not be allowed in other Estonian towns, for example Gagarin Street. It is said that a very large proportion of the inhabitants have never been outside the town.