The hangars before the exhibition was established. 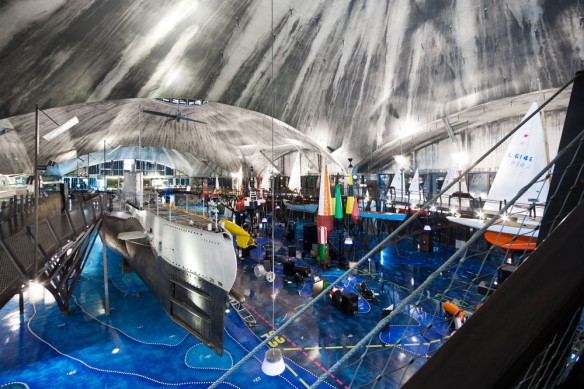 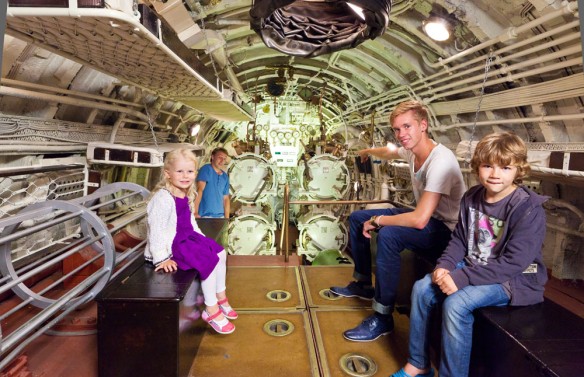 Inside the submarine Lembit. Full-scale replica of Short Type 184, a British pre-World War II seaplane,also used by the Estonian armed forces. Short Type 184 has earned its place in military history by being the first aircraft ever to attack an enemy’s ship with an air-launched torpedo. Since none of the original seaplanes have survived, the replica in Seaplane Harbour is the only full-size representation of the aircraft in the whole World. (Text from the exhibition). This boat class, with two pairs of oars and a smaller sail, was used for fishing in coastal waters. It was one of the smallest types of boat used by refugees crossing the Baltic Sea to reach Sweden in the years 1943-1944. Exhibit story: This “Gotland Refugee Boat” was used by the sailor Hans Suur to escape German conscription in 1943. Having reached Fårö Island in the northern part of Gotland, he sold his small net boat, built for coastal fishing on Saaremaa Island, for ten Swedish kronor. (Text from the exhibition).
World War 2 brought about the escape of many Estonians from their homeland. The escape from the horror of war began in 1942 and it was intensified in the following years by German mobilization.
However the real refugee rush began in autumn 1944 when people started escaping to Germany and over the Baltic Sea to Sweden in masses as the front approached Estonia. By summer 1945, at least 22,000 Estonian citizens had reached Sweden. The number of people who escaped to Germany is estimated to be about 35,000-40,000. Escaping over the sea was a big risk to take – small boats build by the owners themselves in secret in the woods were used and these were at almost equipped with a motor taken from a car. Navigating the sea with an overloaded boat during the autumn storm season that was starting was far from safe. Hundreds of people died crossing the Baltic Sea due to storms or were killed by the gunfire of the Soviet or German Navy and Air Force. (Text from the exhibition). On the outdoor harbor area visitors can tour a collection of historic ships, including the Suur Tõll, Europe's largest steam-powered icebreaker. At the exhibition it’s possible to maneuver with a model of Suur Tõll. The Seaplane hangars are architecturally unique in the whole World. The complex was initially completed as part of “the Peter the Greats Naval Fortress” in 1916-1917. The hangars are the World’s first reinforced concrete shell structures of such a great size.
The hangar is constructed by the Danish engineering firm, Christiani & Nielsen. Charles Lindbergh, the man who performed the first solo flight across the Atlantic Ocean, landed here in 1930s.

The museum consists of a modern exhibition in the impressive hangars and the harbor area with museum ships. Many exhibits are connected to the Cold War Period.
The museum include the Submarine Lembit (In the hangar), the Suur Tõll steam icebreaker (Toell the Great), the Short Type 184 seaplane (in the hangar), and many other large exhibits.
With the help of modern multimedia and hands-on activities the museum tells exciting stories about the Estonian maritime and military history.