Vastse-Roosa küla (village), Mõniste vald, Võru County (just across the border from Latvia by the town of Ape). An important part of the partisan culture was the songs. Meelis Mottus, the owner of Forest Brothers Farm, has published a partisan songbook and is able to provide examples of the songs.
Visitors to Forest Brothers’ farm can also taste partisan food and moonshine. The dish consists of salty meat in fat, which can be stored for several months. The moonshine had an alcoholic strength of 60%. It was often the only friend to many partisans in the long and often cold days and nights. Eha Loorits lives on a farm neighbouring the Forest Brothers' Farm. Her father was also a partisan living in hiding in the forests. Sometimes in the night he went home to see his family. The KBG knew this and raids frequently took place at night. The farm therefore had hiding places for her father. It is possible for visitors to see one of these original hiding places. The KGB tried to obtain knowledge about her father and Eha Loorits witnessed a violent interrogation of her mother. The family was punished in several ways; for example, Eha was banned from attending school. 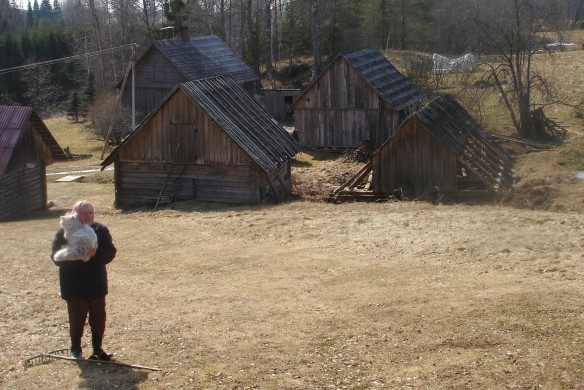 Alfred Karmann, a local Forest Brother, helped the owner of Forest Brother’s Farm, Meelis Mottus, with the planning of the site and knowledge of partisan life.
Alfred Karmann used to move around from one forest hideout to another. Once, he was shot in the arm by a Russian soldier but escaped. A nurse was forced to amputate his arm. The one-armed man spent 8 years underground in forest bunkers, often shivering in the cold winters. He was finally betrayed and tortured by the KGB, without disclosing any of the names of his comrades. He was sentenced to 25 years in a Siberian GULAG camp. After 13 years he was released but was forced to spend 12 years in Latvia before he could return to his homeland. Alfred Karmann died in 2010. Entrance to a reconstructed underground partisan bunker at the Forest Brothers Farm.

A LIVING MEMORIAL TO THE ESTONIAN GUERRILLAS

The Forest Brothers’ farm was founded and is run by Meelis Möttus. Meelis’ father and uncle were guerrillas or partisans fighting against the Soviet occupation forces after the Second World War. The guerrillas were also called Forest Brothers because they hid in the forests in small underground bunkers normally constructed of wood.

On Forest Brothers’ Farm it is possible to see and experience: Reconstructed underground partisan bunkers, the neighbouring farm with original hiding place for partisans inside the house, partisan food and moonshine and partisan songs.

The educational objective of the farm is clear, from the point of view of the owner, Meelis Mottus. The Forest Brothers were called “bandits” by the Soviet occupation forces. He replies: “Men like my father, my uncle and Alfred Karmann (see opposite page) were not bandits. They fought for Estonia’s independence and are an important part of our history. That knowledge should be passed on to our children.”

THE PARTISAN MOVEMENT IN ESTONIA

The armed Estonian partisans were, in practice, active from 1946 until 1956. 14,000-15,000 people participated in the movement. Their activities reached a peak in 1946-47. The partisan movement expected help from the West to re-establish a free and independent Estonia but none was forthcoming. 2,000 partisans died in battles with Soviet forces and the secret police and it is estimated that a further 2,000 died in prisons and GULAG camps.

The mass deportation in 1949, mainly of the independent farmers (kulaks), represented a crucial loss of support and help for the partisans in the countryside.