May-November, 10:00-18:00. In November groups are accepted with advance notification. 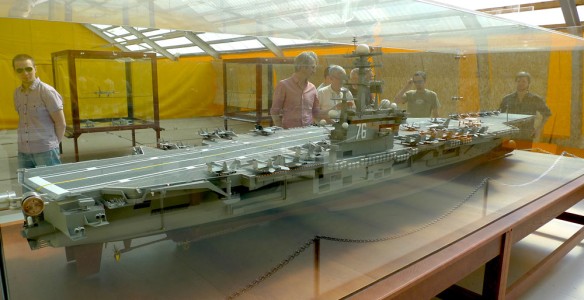 From the exhibition. Model of the hangar ship Ronald Reagan. Scale 1:72. Tupolev Tu-134. Is built in the Soviet Union from 1966–1984 in a number of 852. The Tu-134 has a glass nose for the navigator and the landing gear fitted with low-pressure tires to permit operation from unpaved airfields. The Tu-134 is one of the most widely used aircrafts in former Warsaw Pact countries and has been used in various air force, army and navy support roles; for pilot and navigator training; and for aviation research and test projects. The cockpit with the navigator seat down in the glass nose. Helicopter Mi-8, a Soviet-designed transport helicopter that can also act as a gunship. The Mi-8 is the world's most-produced helicopter, build in 17,000 copies and used by over 50 countries. Mi-8T could be armed with rockets and anti-tank guided missiles, in addition to carrying 24 troops. 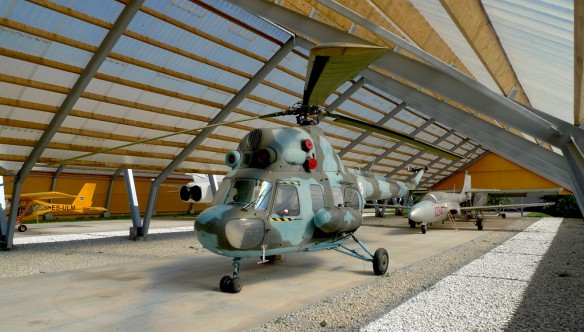 In the front a Mi-2 helicopter. A small, lightly armored transport helicopter that could also provide close air support when armed with 57 mm rockets and a 23 mm cannon. Produced in Poland from 1965-1985 in a number of 7,200. In background a TS-11 Iskra. A Polish jet trainer aircraft, used by the air forces of Poland and India. Produced from 1963-1986 in a number of 424. Sukhoi Su-17, a Soviet attack aircraft with a long career in Soviet (later Russian) service. It was widely exported to communist and Middle Eastern air forces. Produced in 1969-1990 in the number of 2,867. Mikoyan-Gurevich MiG-21. A Soviet supersonic jet fighter aircraft. it is the most-produced supersonic jet aircraft in aviation history and it had the longest production run of a combat aircraft (1959 to 1985 over all variants). Produced from 1959-1985 in the number of 11,496. The founder of the museum Mr. Mati Meos in front of a Lockheed F-104 Starfighter, a supersonic interceptor aircraft originally developed in the United States.

Estonian Aviation Museum (EAM) is founded and owned by a private person, Mr. Mati Meos.
400 aircraft models are on display in the exposition building. On the outdoor exposition field there are 7 fighters, 2 attack-fighters, 1 attack aircraft, 4 training aircrafts, two passenger aircrafts and 2 helicopters.

1903: The first motor plane flight in the human history is performed. The interest of the Estonian people in aviation matters has been born. 1908: The first aero clubs and air flight courses are organized in Estonia. 1912: S. Utotshkin performs the first motor plane demo flight in Estonia. 1918: The birth year of the Estonian Air Force.
On the eve of the 2nd World War the Estonian Air Force has 65 aircrafts. (Text from the exhibition).

The Soviet Military Forces took all Estonian aircrafts to the Soviet Union or demolish them. All Estonian aviation units are abolished and/or liquidated.
The second largest Eastern European military airport is built on the former Tartu Raadi Airfield, 2 km distance from Tartu city center (In addition to the other 1565 Soviet military objects established on the Estonian territory). The airfield housed strategic nuclear bombers, including the notorious Soviet Tu-22M „Backfire” bombers.
Tartu, the second largest city of Estonia and an oldest university town in Europe, is declared as “closed city” to foreigners for the next 50 years!