2011 view from Watchhill (Vågehøj). The photograph is taken ‘on top’ of the hidden Cold War bunker. In the far distance you see Røsnæs Lighthouse. 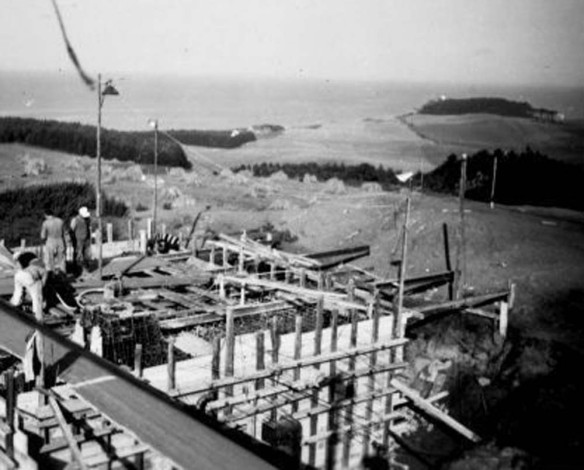 1950 view from Watchhill when The Cold War bunker was under construction. WWII photograph of Elisabeth Møller (middle) and family in front of a Neolithic tomb. In the background you see a Jägerleit Stellung, one of five radio towers in the area who navigated the German fighter planes during the Nazi occupation of Denmark 1940-45. Coastal Lookout Cabin in front of the lighthousekeeper residence on the westernmost tip of Zealand. Warszawa Pact warships were followed closely in the Great Belt (Storebælt). Today the Danish Maritime Safety Administration continues to observe traffic through the belt but mainly for environmental reasons. 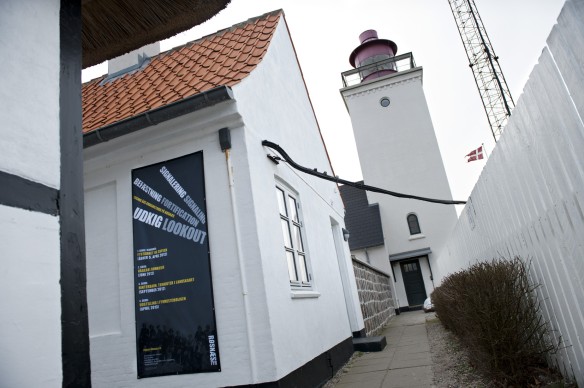 Røsnæs – the westernmost tip of the Danish island of Zealand – has always been fortified and defended in times of war but your first impression of Røsnæs will be one of overwhelming natural beauty rather than the harsh aesthetics of military architecture. You will experience lush rolling hills enclosed by the deep blue sea and, when you lose yourself in the small patches of fairytale forest, you will discover freshwater springs and mythical meadows where the Vikings used to perform their rites.

1000 YEARS OF DEFENDING THE REALM

Danish borders have moved following the outcomes of countless wars but the heartland of Denmark has always been roughly enclosed by certain distinctive landscape features. In the north, the long ridge of Hallandsåsen used to mark the border with Sweden and our southern German border is still physically marked by wide marshlands. Our most significant border phenomenon by far, however, is the ever present sea. The sea was typically the first line of defence. Searching the horizon for enemy ships at key points along the Danish shore was paramount in securing lives and political power. Røsnæs is one of these key points.

The last ice age formed Røsnæs into what was later to become a strategic important location in the middle of the Great Belt (Storebælt), the important waterway connecting the Baltic Countries in the east to the North Sea and the rest of the world. Ancient place names such as Watch Hill (Vågehøj) and Beacon Mountain Forest (Bavnebjerg skov) link the defendable lookout and early warning site of the past with the much more present military events of WWII and the Cold War.

During WWII, the Nazis occupied Røsnæs in the belief that the allied invasion might be launched here. The Nazis built radar towers and gun positions, dug countless bunkers, trenches and tunnels while the British mined the seas from their warplanes in order to keep German ships in the harbour. After the war, local people from Røsnæs unsuccessfully tried to remove the bunkers with explosives but finally decided to bury them instead. And when the new enemy, the Soviet Union, was finally spotted on the horizon, further bunkers were dug and new radar towers erected.

It’s all still out here as part of the landscape.

War has been a major factor in shaping Røsnæs into its current beauty. Battlements from various wars are hidden underneath forest and grassy hills as a well integrated into part of this exciting and dramatic landscape. The notorious Røsnæs Reef, beginning at the foot of the lighthouse with some of the best underwater visibility in Denmark, is the site of numerous shipwrecks, some of them sunk in battle. Røsserne, the people living out here, repeat their childhood war stories over and over again, giving these violent events of modern history a local and individual perspective. The warscapes of Røsnæs thus also need to be understood as an emotional state of mind typical of the people living here. People, history and scenery are interconnected in a rather unique way.

We are currently developing a new exhibition concept in the old lighthouse buildings with the aim of enabling and inspiring you – our forthcoming visitors – to discover these warscapes on your own, moving around the area, and in this way, to help you find your own adventures here.