From the permanent exhibition in the 156 meter long Arsenal Hall. It is said to be the longest arched renaissance hall in Europe. The following photos. From the non-permanent exhibition The Distant War about the Danish soldiers in the war in Afghanistan. 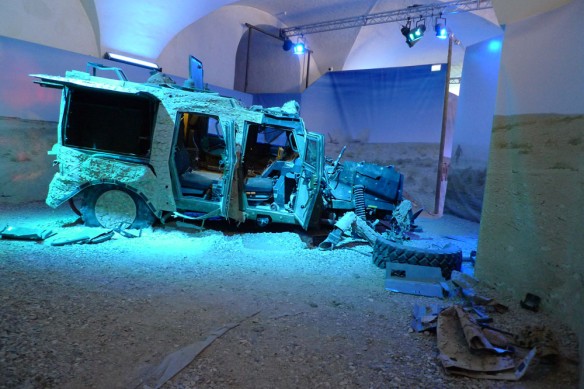 The Royal Danish Arsenal Museum has since 1604 held hand weapons and canons. Originally, it served as an arsenal for the Army and the Navy and finally as a museum. Only a few buildings in Denmark have a tradition this long for at specific purpose.

The Armed Forces in Copenhagen

The Royal Danish Arsenal Museum is located in the old Arsenal built by Christian IV with the purpose of storing canons and hand weapons. The building itself is a monument to commemorate how the renaissance extended the Royal Power and how it was centralized in Copenhagen. Models of King Christian IV’s Arsenal and of the Citadel in the 18th century indicates how much the Armed Forces influenced the capital.

The 156 meter long Arsenal Hall is said to be the longest arched renaissance hall in Europe. The oldest Danish canons and more recent types are exhibited here.

The Royal Danish Arsenal Museum is currently renewing its permanent exhibitions on the first floor, which were previously unchanged since the 1930’s. The museum expects to open the new exhibition in the end of 2012, and this exhibition will show the history of Danish warfare through the last 500 years. A section of the exhibition will be dedicated to the cold war. For updates on the exhibition, please see the museum’s website.