Tickets are only sold on the ship PEDER SKRAM.

Tours in English are available.

The frigate PEDER SKRAM. The Navy’s flag ship during the Cold War is now open to the public as a museum ship and is owned by a foundation. The frigate was built in 1965 and was the first large warship in the world to have both diesel engines and gas turbines. For 25 years it was part of the backbone of the Danish naval fleet. Today, after extensive renovation, the frigate has been almost fully restored to its condition 40 years ago. 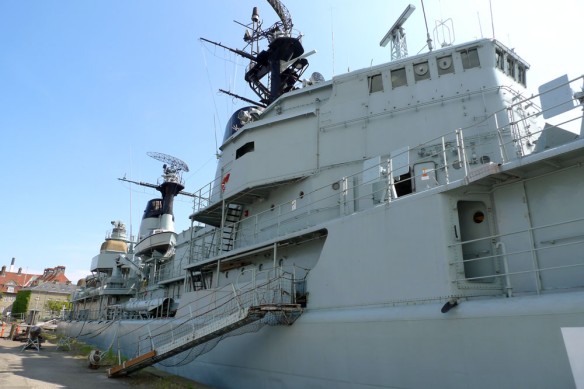 The submarine SÆLEN. The submarine was in active service in the Royal Danish Navy from 1993 to 2004, during which time it was deployed in missions in, for example, the Mediterranean and the Persian Gulf. It has been a museum submarine since 2004. The entire submarine has been preserved almost exactly as it was when it was decommissioned, down to the smell of the diesel oil and the coffee pot hanging from the ceiling. The torpedo boat SEHESTED. An effective weapon from the days of the Cold War, where speed, firepower and electronic surveillance equipment made a crucial difference. Three gas turbines could propel the vessel at a speed of over 40 knots. Armed with torpedoes, Harpoon missiles and a powerful deck gun, Sehested was a fearsome opponent on the water. On the quay is seen the old Mast Crane from 1748. The lower wood construction is covered by a stone building. The wooden structure is bound together with rope in order to ensure a stable but still elastic construction. 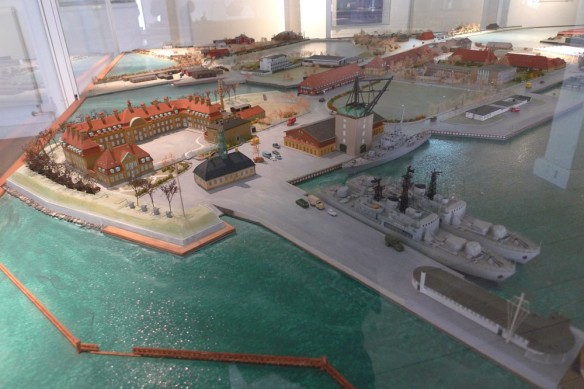 THE HISTORIC SHIP area. From a model at the Royal Danish Naval Museum, Copenhagen

During the Cold War, Denmark’s unique position, guarding the passage between the Baltic and Atlantic made Denmark of strategic importance to NATO as well as to the Warsaw Pact. The Royal Danish Navy’s main task was to guard the western part of the Baltic in close cooperation with the West German Navy, in order to prevent the Warsaw Pact from accessing the Atlantic, and thus jeopardizing the vital shipping lines between North America and Europe in the event of a war. The Danish navy made use of a broad range of measures to solve this task – notably minefields, which were the backbone of the defence of the Danish straits. To protect the minelayers and delay a Warsaw Pact invasion of Danish territory, the Danish navy made use of Frigates, fast attack boats as well as submarines.

Today three different vessels from the Cold War era is preserved at Holmen, Copenhagen the traditional home of the Danish Royal Navy. The mighty Frigate PEDER SKRAM with her 5 inch guns, her Seasparrow SAM (Surface to Air) as well as her Harpoon SSM and Torpedo System is on display. Close by rests SÆLEN the last Danish submarine, famed for her participation in the War on Iraq in 2003 as well as her history of protecting Norwegian waters during the Cold War. Also on display is P 547 SEHESTED the last fast attack boat in the Royal Danish Navy. Her high speed and maneuverability in combination with her low signature, her heavy armament of 8 Harpoon SSM, a 76 mm auto cannon and torpedo tubes made her and her 9 sister ships formidable opponents to any Warsaw Pact invasion fleet.

During opening hours visitors are free to walk around PEDER SKRAM and experience her many compartments and authentic environments. At SÆLEN and SEHESTED tours are available every 30 minutes. Great care has been taken in preserving SÆLEN and SEHESTED as they were on the day they left active service, authentic belongings of the crew members are maintained to give an authentic environment. The tours focus on the strategic as well as the tactical function of the two vessels, although the tour of the Submarine SÆLEN also focuses on life onboard beneath the waves.