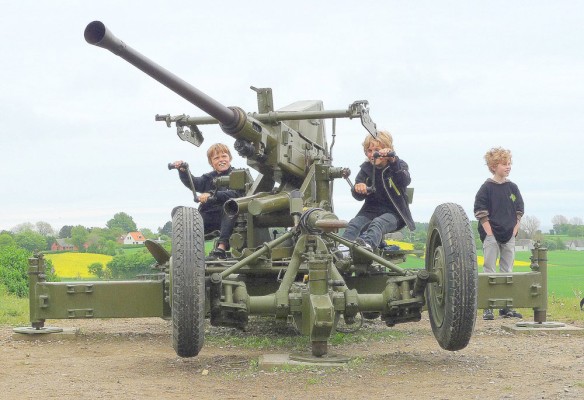 One of the four 150 mm cannons at the fort. In the background, Langelands Bælt. It is possible to visit the cannons’s underground bunker. The projectiles were stored here and transported up to the cannon in a special lift. Each gun had a crew of 15, and the cannon could fire a distance of 22 km. A good crew could dispatch 6 shots per minute. Each grenade weighed 45 kg.
The cannons were manufactured by the SKODA factory in Pilzen, Czechoslovakia, towards the end of the Second World War, on the instructions of the German army. They were intended for use in the Danish coastal batteries but had not been installed when the war ended. 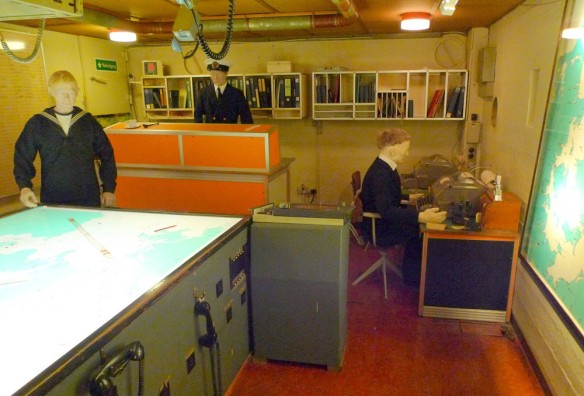 The museum bunkers on the Langelandsfort appear quite authentic. Almost all the furniture and equipment has been maintained, in contrast to many other protected military installations in the countries around the Baltic Sea.
The photo is from the fort’s operation bunker, where attacks were directed from in wartime. In peacetime, it was a centre for monitoring the shipping traffic in the belt. The bunker was always manned, in time of war with 25 men and in peacetime with less than half of that. This operation room has a large light table with a map of the Baltic Sea and Danish waters. A soldier stands at the table, ready to mark the observed enemy units. The officer on duty is sitting in the background. He is in contact with other places that are monitoring the enemy forces. The Danish submarine ”Springeren” (”The Knight”) is on display at the fort. This was the last Danish submarine in operation when it was decided to dismantle this part of the Danish navy. The photo shows the transportation of the submarine to the fort. 150 mm cannon fired from the German cruiser "Emden". The same type of cannon is found on the Langelandsfort.

THE MAIN FUNCTION OF THE FORT

The Langelandsfort is located on the southern part of the island, Langeland (Long Island), in a hilly terrain with views over the Baltic Sea and the Langelands Bælt.

The fort was built in 1953 and closed in 1993 following the collapse of the Soviet Union.

A special task of the fort in case of war was to participate in the defence of the minefields in the belt, together with Danish air and naval forces. The main objective was to delay attacking Soviet sea forces so that NATO flights from foreign countries had time to arrive.

The most likely outcome of a Soviet attack on the fort was that it would be rendered inoperative relatively quickly. One of several Soviet attack plans included dropping a tactical nuclear bomb on the fort.

The fort armaments. What can be seen today?

The fortifications are situated on an 11-hectare plot of land. The main armaments consist of:

It is today possible to visit four underground bunkers: a cannon bunker, an air defence battery bunker, the bunker of the operational activities and the ammunitions bunker, which houses a Cold War exhibition.

In addition, the museum now has three aircraft, a submarine and a minesweeper all of which, in some way, are connected to the history of the Langelandsfort.

In 1962, a U.S. spy plane observed that the Soviets were about to build missile bases in Cuba. This meant that nuclear-armed missiles could soon be operating only 140 km from the U.S. border. The US therefore declared a blockade of Cuba and prepared a military confrontation with the Soviet Union. US ships and flights were sent out to block access to Cuba and bombers with nuclear weapons were sent on the wings. The Soviet ships were forced to return to the Soviet Union from the middle of the Atlantic. The Soviet Union later abandoned its plans for missile bases on Cuba.

The Langelandsfort had an observation post on the coast from where the Soviet shipping traffic was recorded. Civil Soviet ships with military equipment for Cuba were observed from Danish coastal observations posts several months before the crisis broke out.