Possible topics include: the partisan movement (The Forest Brothers); the GULAG camps; the freedom struggles of the 1980s and 90s in Lithuania.

Albinas Kentra has unique video footage of the freedom struggles, particularly the bloody January events of 1991 in Vilnius, when hundreds of thousands of Lithuanian people took to the streets in their newly independent country to protect key institutions from the Soviet military forces.

Not many people in Western Europe are aware that the Soviet Union killed 36,000 Lithuanian partisans over the 1945-56 period, many of whom were executed after being taken prisoner and without any trial. The partisan struggle is also called the “War after the war or Secret War” because of the West’s ignorance of its existence. The partisans, who fought for an independent Lithuania, expected help from the free world but it was not forthcoming. In addition to this: 137,000 people (all named) were deported from Lithuania to the Soviet Gulag camps and slave villages over the 1944-1948 period. All this out of a population of only 3 million inhabitants. It was a similar story in other eastern European and Communist countries, including Estonia, Latvia and Poland.

Why was Albinas’ family so deeply involved in the partisan movement? His family had three choices: to go to the West, to stay in Lithuania and experience the humiliation of occupation or to defend Lithuania from its enemies by speaking, writing and if necessary, resorting to weapons.

As in 1944, the Red Army occupied Lithuania once more and began its terror with renewed vigour. Albinas’ mother spoke to her four sons and two daughters, telling them they should not hesitate to defend the people of Lithuania.

Three brothers died in the freedom struggle. Albinas was sentenced by a Russian Military Tribunal and sent to a GULAG camp. His mother was wanted by the KGB but was never caught. She died in the 1960s and was buried in a secret ceremony.

Albinas is a very active and enthusiastic amateur video photographer. He has unique footage from the dissident period and the freedom demonstrations in Vilnius around 1990, for example. It is historically unique evidence over and above any other videos and photos from the period. A short video presentation of Albinas and some of his videos can be seen in the “Eyewitnesses” section of this website.

Once, Albinas was asked how he dared to photograph the Soviet soldiers at such close range (often very near to their faces) during the freedom demonstrations in 1991 in Vilnius, when 13 people were shot and hundreds more injured by the Soviet security and Army forces. He also recorded a video when the defenders were running towards the publishing house while live bullets were hitting the wall above their heads. Most people would turn and run under such circumstances.

He told the following story in response to this question: 32–year-old Albinas was going to the school to teach German through the deep snow. In the middle of the forest, he saw two dogs. When he approached them, he realized that they were wolves. There was no possibility of climbing a tree or running away. With his arm raised, he went slowly towards them without any fear, looking into their eyes. He stopped close in front of them and gazed into their beautiful eyes until both of them turned and slowly went away. So he answered the question of how he dared photograph (video tape) the Soviet soldiers and security forces at close range by replying that he “just looked the wolf in the eyes.”

Albinas has been Chairman of one of Lithuania’s veteran organizations for partisans “Lithuanian Freedom Fighters – Forest Brothers Association” for many years. In this context, he has been endeavouring to establish a memorial centre for the partisan movement in central Vilnius. The organization has built a beautiful house out of the former ruins. Here, he would not just make a traditional museum that would reflect only the partisan movement’s tragic events but also show the movement’s cultural life: the reading of partisan literature/poetry, partisan song and dance, serving partisan food, etc. The glorious moments of partisan life had to be depicted too! Children and young people needed to know that there were positive and cultural sites associated with the fight against the Communist invaders. Numerous intellectual visitors from Denmark and other countries are worried that the building’s reconstruction has still not been completed. This is why much of the Forest Brothers’ valuable historical filmed material on the Lithuanian way to freedom cannot be presented to visitors.

The Soviet and Communist policy was to openly destroy the old Lithuanian society and its culture and traditions. This included the collectivisation of agriculture, education, religion, history, literature, film, music, etc. All organizations and authorities were checked and rectified to an extent that is not easily understand in the West. The following groups were officially designated as “nationalists and class enemies”:

Despite this systematic persecution, it is remarkable that Lithuanian culture and traditions survived and even blossomed underground. There is even a photo showing a secret Catholic Easter fair being held for Lithuanians in a mine in a Gulag camp in Siberia! Albinas Kentra is Chairman of the Lithuanian Freedom Fighters - Forest Brothers Association. He has been involved in some of the most important historical events of recent Lithuanian history, such as: the partisan movement and fight for freedom from the Communist regime and Soviet invaders; the KGB regime and the GULAG camps; the struggles for freedom and the bloody demonstrations of 1991. Albinas Kentra has been an enthusiastic video photographer and has highly valuable and unique video recordings from several historical events. Some of his recordings can be viewed on this website, on the “Eyewitnesses” page where there is a portrait of Albinas. 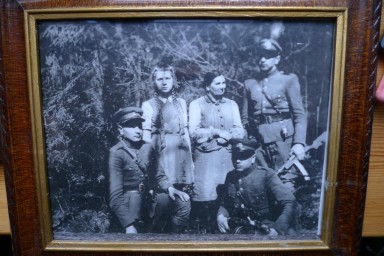 Albinas’ mother, sister and three brothers. All his brothers, here wearing the partisan uniform, were murdered during the Lithuanian freedom struggles against the Communist regime. Two of the brothers fought for five years, and one for seven. Their mother died in hiding in 1961 and was buried in a secret ceremony. The Kentra family lived on a farm in the Lithuanian countryside. They resolved to defend Lithuania from the Soviet invaders. To this end, they built a sophisticated and secret partisan bunker even before the Soviet Red Army had invaded Lithuania for the second time in 1944. The drawing shows the construction of the secret bunker room under the farm. In April 1945 the family was informed that the occupying soldiers were on their way to deport them. They had no time to leave the house. The dog defended the farmhouse until the soldiers beat him to death. Albinas thinks he deserves a monument. From that time on, the farms of good people, forests and bunkers became Albinas’ family homes. Spassk GULAG Camp. Albinas’ partisan resistance ended on 7 July 1946. After his night mission, he had to meet one of the resistance in Silale. It was the last time he was permitted to go in the daytime because it was dangerous. Although he ran fast from the NKVD soldiers, he ended up surrounded near Silale. Even standing in front of a Russian squad, he did not betray any partisans or their supporters. They took him, covered with hay, in a farm wagon to the NKVD residence in Silale. Nobody knew that he had been arrested. The Russian Military Tribunal sentenced him to ten years in a GULAG camp. He was sent to the Spassk camp in Kazakhstan, 35 km south of Karanga. It was one of the biggest Gulag camps in the country and was an extraordinarily brutal one (according to Solzhenitsyn's "The Gulag Archipelago"), with a particularly high death rate. A mass grave of some 5,000 prisoners can be found here. Memorials from around 10 countries can today be seen in the former camp area. From the exhibition in the TV Tower. The TV tower and parliament (the two sites are described on the website). The Soviet military forces went into crucial action in January 1991 despite Lithuania having proclaimed independence in 1990. The fiercest attack on independence supporters took place at the Radio and Television Committee building and the TV Tower on 13 January. Thirteen freedom defenders were shot, one died of a heart attack. The following day after this Bloody Sunday, 100,000 people surrounded the parliament and built anti-tank barricades. The Soviet forces retreated. Albinas has highly emotional videos of both events. Part of the videos can be seen on the “Eyewitnesses” section of this website where a portrait of Albinas can be found. Partisan Centre in central Vilnius. Today, Albinas Kentra is involved in developing a Partisan Centre in central Vilnius. The idea is that the centre should not only describe the terrible Communist destruction of the freedom fighter movement – like many other museums – but should also describe the entire and positive partisan culture of music, songs, dance, literature, food, beers, etc. Vilnius University. Description of Lithuanian history. Albinas Kentra was the initiator of the wall paintings in some of the bigger rooms at Vilnius University, depicting themes from Lithuanian history. When Albinas was released from the Spassk GULAG camp, he went to Kaunas to finish secondary school. He later studied Roman and Germanic languages and literature at Vilnius University. He worked as a teacher of English and German languages in schools for two years. After finishing two years of studies at Leningrad University, and having passed all his doctorate exams, he was able to select any university in the Soviet Union. He chose Vilnius University and worked there as a lecturer of English, continuing his partisan resistance in a different way. There, he concentrated on breaking a hole in the Iron Curtain of the Soviet Union in order to receive radio information from the West. For this purpose, he organized a team to build an audiovisual centre at Vilnius University to teach true spoken English. Radio broadcasts in Lithuanian and Russian were jammed throughout the Soviet Union. English, however, was not. At that time, former GULAG prisoners were not permitted to study at university but Albinas was released from the camp with his name misspelled on his identification papers and so the KGB could not find his name on any lists of former political prisoners.