Latvia was independent from 1920 until 1940. Before that it was a part of the Russian Empire.

By means of the 1939 Molotov-Ribbentrop Pact, Latvia came under the Soviet “sphere of interest”, together with the other Baltic States, Finland and a part of Poland. In 1940, the Soviet army occupied Latvia following an ultimatum and the threat of military action. A Communist puppet government was installed after an election in which only Communist candidates approved by the Soviet Union were able to stand. Latvia then became a member of the Soviet Union and was henceforward in effect governed from Moscow.

Nazi Germany attacked the Soviet Union in 1941 and occupied Latvia. The invasion was called “liberation” but was, in fact, an occupation controlled completely by the German authorities.

Both occupations were brutal and uncompromising and no less than one-third of Latvia’s pre-war population of 2 million had lost their lives by the end of the Second World War.

The enemies of the Communist regime, the so-called “anti-Soviet elements”, were mainly described as “fascists” and “bourgeois nationalists”, terms used to denote people who wanted an independent Latvia. They were primarily armed partisans, independent farmers and Catholic clergymen, people with former positions in society and people who had co-operated in some way with the German invaders.

Latvia experienced the greatest influx of ethnic Russians of all the Baltic countries. By 1989, the Russian population accounted for 34% of the total population, and ethnic Latvians only 52% (the rest came from other Soviet countries). The ethnic Russians formed a majority of inhabitants in the capital Riga. One of the reasons for this colonization was the country’s strategic location and extensive militarization. Riga was the headquarters of the Baltic Military District and the whole country was full of military installations. Most of the coastal area was prohibited to the inhabitants.

The Sovietisation was, to a great extent, also a “Russification”, because of the Russian colonization, the use of Russian as the main language and the fact that the country was effectively governed from Moscow.

The armed and unarmed Latvian resistance

The armed resistance in Latvia after the Second World War consisted of 20,000 armed partisans along with 80,000 supporters. Approximately 3,000 partisans were killed and 5,000 sent to GULAG camps, along with tens of thousands of supporters. Officially, the partisans were called “bandits”. The partisan movement reached its peak in 1949 and was disbanded in the mid-1950s.

15,500 Latvian residents were arrested in 1941 and deported to remote and desolate regions of the Soviet Union. These were mainly families whose members had held leading positions in society in the former independent Latvia. Men were separated from their families and sent to GULAG camps, women and children to “administrative settlements” as family members of “enemies of the people”.

42,000 people were deported in 1949, mainly partisan supporters and farmers (kulaks) who were against the collectivization. 73% of the deportees were women and children under 16 years of age.

After Stalin’s death many were able to return but were often considered unreliable by the local Communist governments.

The struggle for freedom

The first important movement for independence was Helsinki 86, a group of intellectuals who organised open demonstrations for the deported Latvians and memorial meetings at the Liberty monument in Riga in honour of Latvia’s Independence Day (1920).

The beginning of the end of the Soviet Union began seriously in 1988 with the Soviet glasnost and perestroika movements, which resulted in some freedom in speech and writing.

A majority from the newly-established anti-Communist movement, the Latvian Popular Front, was elected to Parliament in 1990 and subsequently declared Latvia’s independence. The unbelievable demonstration The Baltic Way took place in August – a chain of hand-holding people stretching from Tallinn to Vilnius. Later, two counter-attacks were organized by the Soviet forces and Communist organizations.

Three freedom defenders were killed when the government asked people to defend a number of key institutions in Riga following threats from the Soviet leaders. No less than 700,000 people demonstrated in Riga on January 13, 1991, and barricaded all major public buildings. 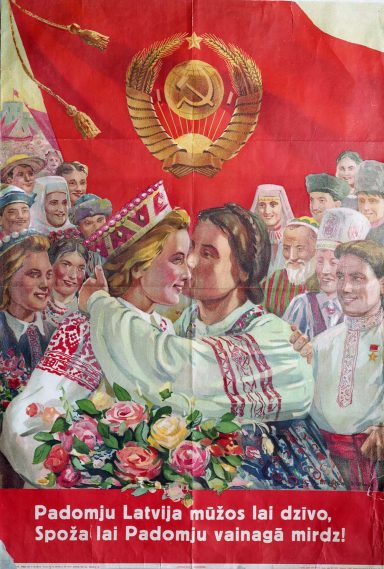 A Soviet propaganda poster. The text says: “Live forever Soviet Latvia, a shining jewel in the Soviet crown!” The undemocratically elected Latvian Parliament decided to declare Latvia a member of the Soviet Union in 1940 although this was unconstitutional. Only Communist parliament candidates were approved by the occupying Soviet military forces. Soviet propaganda in relation to Latvia’s loss of independence, and also that of the other Baltic States, can be found in a Soviet history textbook: “By the summer of 1940, a revolutionary situation had developed in Latvia. Under the leadership of the Communist Party of Latvia, a Socialist Revolution took place. Confronted by the demands of the working class, the bourgeois government stepped down. Democratic elections took place, and a new Saeima (parliament), heeding the demands of the working class, established the Latvian Soviet Socialist Republic. It became the fifteenth member of the Union of Soviet Socialist Republics on 5 August 1940”. (The Museum of Occupation, Riga, Latvia). 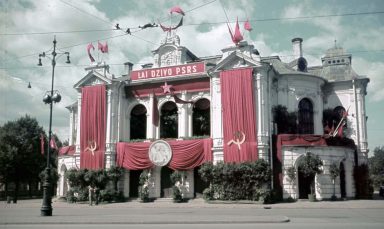 The National Theatre with Communist regalia. Located on Kronvalda bulvāris 2 in Old Town north of K. Valdemara iela. Latvia’s independence was declared in the theatre in 1918. It was also here that the Communist parliament requested membership of the Soviet Union in 1940. (The Museum of Occupation, Riga, Latvia).

Stende 1949. A train with cattle wagons is being prepared for deportation. The only known photo from Latvia showing the deportations. (The Museum of Occupation, Riga, Latvia). 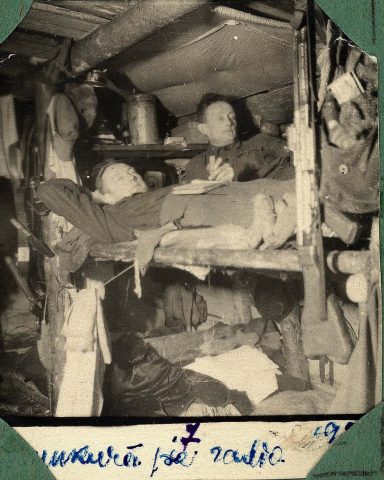 A rare photo of partisans in a small underground bunker. Commanders P. Cevers and A. Kalniņš in their sleeping places. Winter 1950. Cesu District. (The State Archives of Latvia). 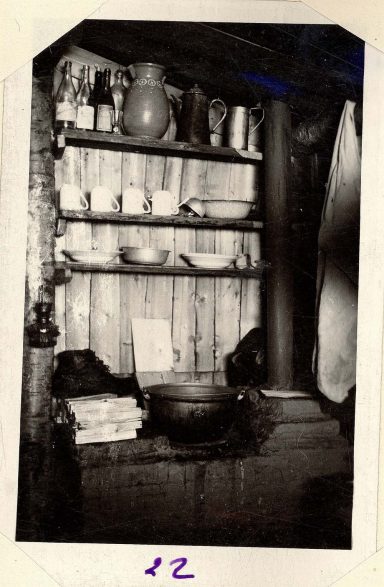 The household of the same bunker. (The State Archives of Latvia). 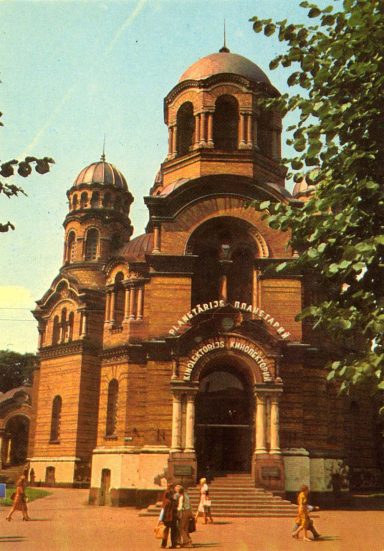 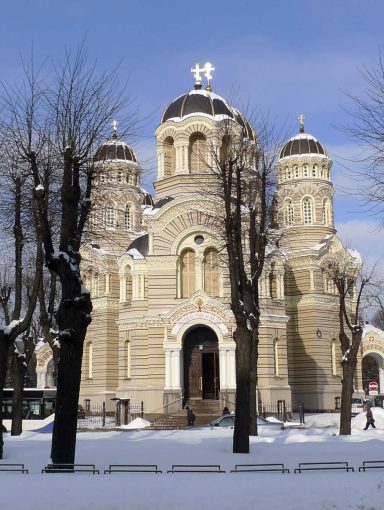 Today it is restored and again functioning as a Russian Orthodox Cathedral. Johannes Bach Rasmussen).