The Second World War. Separate wars with the Soviet Union: the Winter War and the Continuation War

The Molotov-Ribbentrop Pact (1938) between Nazi Germany and the Soviet Union decided in secret that Finland would become a part of the Soviet “sphere of interest”.

After the invasion of Poland, the Soviet Union demanded that Finland lease it the Hanko Peninsula, located at the entrance to the Gulf of Finland and the waterway to the Soviet naval base, Kronstadt, and Leningrad (St. Petersburg) the second largest city in the Soviet Union, as a naval base. Furthermore, the Soviet Union wanted to move the border 25 kilometres back from Leningrad. In exchange, Finland could have a part of Karelia. The Soviet demands were refused by Finland and the Winter War started. The Soviet Union attacked with superior forces but Finland resisted the invasion successfully, albeit without any chance of victory. The peace treaty resulted in territorial losses for Finland, including the Finnish part of Karelia. The German invasion of Russia was supported by Finnish forces in the Continuation War, 1941-1944.

The treaties signed following the war included Finnish obligations and reparations as well as territorial concessions. Finland did not, however, become a Soviet state.

Finland in the Cold War period: Neutral and independent, but adapted to the Soviet Union

The Finnish military and political situation was difficult and complex during the Cold War period because of the country’s close proximity to the Soviet Union.

A Friendship, Cooperation and Mutual Assistance Pact signed in 1948 gave the Soviet Union influence on Finnish foreign policy. There was also a tendency within Finland to avoid statements and acts that could be considered anti-Soviet. This phenomenon was also known as Finlandisation. The media was self-censored and anti-Soviet books were removed from libraries. The authorities had the power to censor movies.

It must also be noted that Finland remained a Western market economy and yet also benefited at the same time from preferential trade with the Soviet Union.

THE PORKKALA AREA. AN ILLUSTRATION OF THE FINNISH-RUSSIAN RELATIONS.

Porkkala. A soviet base on Finnish territory leased for 50 years

The so-called Porkkala area has a very special Cold War history that is not found anywhere else in the countries around the Baltic Sea.

The armistice agreement between the Soviet Union and Finland that followed the Second World War was concluded in 1944. Finland was not in a political or military position to refuse the agreement. The territorial demands included military strategic areas such as Karelia and Petsamo (the Finnish passage to the Barents Sea).

A third area, Porkkala, was leased to the Soviet Union for 50 years as a naval base.

Porkkala is situated in southern Finland, on the Gulf. Many Finns saw the Porkkala base as a stepping stone for a subsequent Soviet invasion and, thus, also a threat to national sovereignty. The capital Helsinki, only 19 kilometers west of Porkkala, could be reached by artillery from the base, which was also referred to as a pistol against Finland’s head.

The Soviet army left the area 12 years later. The period is also known as the Porkkala Parenthesis.

A military strategic location on the Gulf of Finland

The main objective of the occupation of Porkkala was to block the Gulf of Finland at its narrowest point between Finland and Estonia, a distance of only 36 kilometers. There are naval bases and strong artillery on both sides. A fort was also located south of Porkkala on the island Makilo (not accessible today).

The plan to secure the Gulf of Finland and the entrance to Leningrad was an old one. Such a plan had already been decided following the Russian-Japanese war in 1905.

The evacuation of Porkkala’s inhabitants in 1944

The area of Porkkala covers 42.5 square kilometers of land. It was shocking for the 7,000 residents to be given just nine days to leave, along with all their belongings and 8,000 animals, the potato and wheat crop and as much hay for the winter as possible. 20,000 people assisted the inhabitants with the evacuation.

At least 30,000 people from the Soviet Union moved into the area during the period of the lease, including 10,000 civilians. Soviet society in Porkkala was totally cut off from the rest of Finnish society.

Handed back to Finland in 1956

By 1955, the military importance of Porkkala had lessened due to new weapons and a new, strong center for the Soviet Navy in Kaliningrad. Furthermore, bilateral relations between Finland and the Soviet Union were now improved. Porkkala was therefore handed back to Finland in 1956. Most of the former inhabitants returned to their old homes, but also to the reconstruction of a completely dilapidated area. 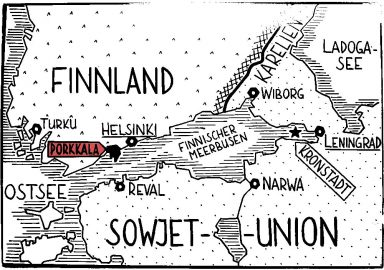 The map shows the Gulf of Finland and the strategic location of Porkkala on the narrowest point of the Gulf. Military installations were also located on the Estonian side of the Gulf, in Naissaar, opposite Porkkala. The Gulf formed the entrance to Leningrad and the Soviet naval base in Kronstadt. Note the strategic position of Karelia as a military buffer zone to Leningrad (St. Petersburg), the second largest city in the Soviet Union. (Degerby Igor Museum). 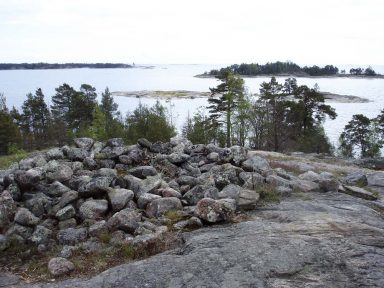 An historical view from the south coast of Finland. In the foreground, a grave from the Bronze Age. This shows that the coastal areas have been settled in decades. The coast has nearly always been an important route for goods and people. One of the small islands that can be seen in the distance is the military fort of Makilo, from where it was possible to control the entrance to the Finnish Bay, together with artillery from the Estonian site. In clear weather the Estonian side can sometimes also be made out, only 36 kilometers away. The mutual connection between southern Finland and Estonia has always been a close one (by boat in summer and by horses over the ice in winter). The southern part of Finland and the northern part of Estonia used to more or less operate as one country, with trade in goods, close links between the populations (especially the fishermen), mixed marriages etc. After the Second World War this longstanding mutual link was completely cut off. The only signs of life “from the other side” were fugitives from the Soviet Union who would sometimes pass by in small boats trying to reach Sweden. Finland was not a safe place for these people, as they were frequently sent back to the Soviet Union.(Johannes Bach Rasmussen). 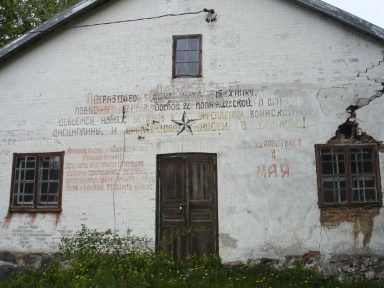 From Porkkala. Soviet propaganda at a former dairy building in Sjundby: “In model fashion we shall receive science and technology, improve the military and political strength, achieve new successes in the strengthening of the military discipline and organization. Be greeted, on the First of May”. (Johannes Bach Rasmussen) 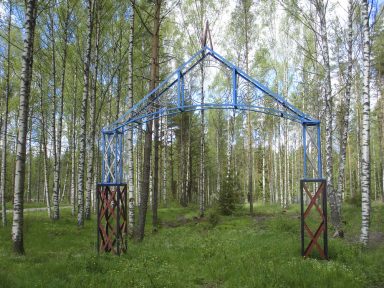 From Porkkala. Triumphal arch for the Haubitz regiment located in Kabonovintie. The headquarters of the regiment was probably located near the arch. The fine stone road nearby, the Kabanov Road, was built for artillery and named after the last Soviet commander-in-chief of Porkkala. (Johannes Bach Rasmussen). 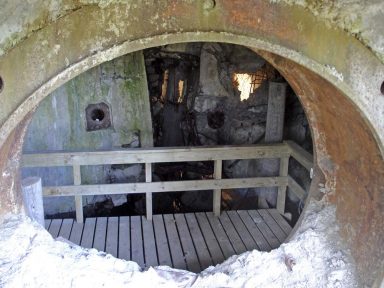 From Porkkala. Ruins of a Soviet bunker are located east of Degerby. All bunkers were blown up and covered over by the withdrawing Soviet forces. (Johannes Bach Rasmussen).