THE MUSEUM OF THE POPULAR FRONT OF LATVIA, RIGA

The museum is under development. It is located in a house owned by a foundation that has its roots in the Popular Front of Latvia. The front’s activities were organized in this building during the period when it was active. Contact the administration in the building in order to gain access to the exhibition and the historical rooms. Lectures and information activities can be arranged for visitors. 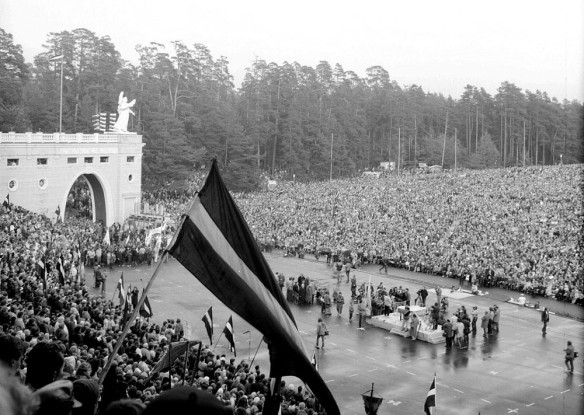 The Singing Revolution is the name by which events in the Baltic countries, with often spontaneous mass singing of national songs that were forbidden by the Soviet authorities, are known. These events, between 1987 and 1990, significantly strengthened the unity of the Baltic people, and this led to the re-establishment of national independence.
The photo is from the Mezapark, Riga, on October 7, 1988, when 120,000 people and around 200 choirs participated in an event expressing their support for democracy and independence. 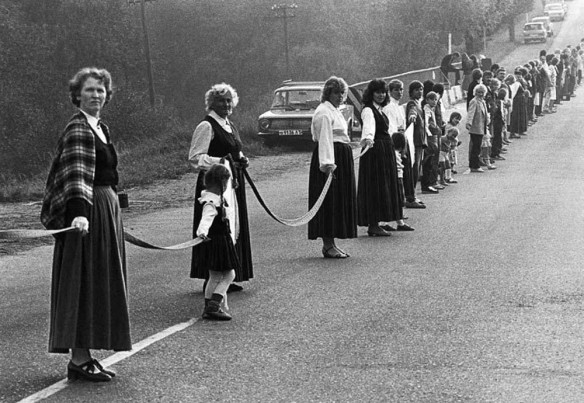 The Baltic Way was a 600 km long chain of people holding hands through all the Baltic countries, connecting the capitals. This peaceful, symbolic and very emotional political demonstration took place on August 23, 1989 and was arranged by the major national movements in the three Baltic countries: the Lithuanian Sajudis (known as the Reform Movement of Lithuania), the Estonian Rahvarinne (the Popular Front of Estonia) and the Latvian Tautas Fronte (the Popular Front of Latvia). It is estimated that 1,500,000 people participated in the chain.
The event also marked the 50th anniversary of the Molotov–Ribbentrop Pact between Nazi Germany and the Soviet Union. This pact divided Eastern Europe into spheres of influence. The Baltic States were in the Soviet sphere, which led to the occupations of all the countries in 1940. The result was mass arrests, deportations and executions of primarily leading figures in the three independent states.
Some days later, the Central Committee of the Communist Party announced on Soviet radio that “growing nationalist, extremist groups" were promoting "anti-socialist and anti-Soviet agendas” and that the groups were discriminating against ethnic minorities and terrorizing those still loyal to Soviet ideals. The Baltic Way was referred to as "nationalist hysteria". According to the announcement, such a development would lead to an "abyss" and "catastrophic" consequences. The “workers and peasants” were called to defend the Soviet ideals.

THE FIRST STEPS TOWARDS INDEPENDENCE

The Popular Front of Latvia was a political organization that was of great importance in Latvia’s transition to independence from the late 1980s to the early 1990s.

The Soviet leader Gorbachev’s perestroika and glasnost reforms in the 1980s resulted in more freedom of speech and writing. This quickly developed into an open desire and demands for democracy and independence.

The first demonstrations for more openness within society came from the Environmental Protection Club in 1986-87 and were suppressed by the communist Latvian government. They protested at the construction of a hydroelectric power station and a subway in Riga. The human rights group Helsinki-86 held, among other things, a ceremony for the people deported in 1941. The Writers Union published the secret protocol of the 1939 Molotov-Ribbentrop Pact between Nazi Germany and the Soviet Union. This agreement brought Latvia under the Soviet “sphere of interest” and resulted in its occupation by the Soviet Union in 1940.

THE POPULAR FRONT OF LATVIA. A KEY POLITICAL ORGANIZATION IN THE STRUGGLE FOR DEMOCRACY AND INDEPENDENCE

Several political movements were formed in 1988, among these the Popular Front of Latvia. They were all aimed at establishing democracy and independence. The Popular Front was the biggest and also the most moderate, supported by many moderate communists and non-Latvian minorities. It quickly attracted 250,000 members.

At the first free elections in 1989 and 1990, a coalition led by the Popular Front won a large majority of the seats in the Parliament, even though 48% of the Latvian population was ethnically non-Latvian. They took up key positions in the government as prime minister, deputy speaker and some ministers. The independence process began in May 1990 and ended in August 1991.

The following year was very turbulent for the new government, with many political and economic problems. In fact, the Popular Front consisted of people with widely differing political views but with one overall goal: democracy and independence. When this goal was achieved, many politicians left the front. It subsequently lost its political power and, by the 1993 elections, was no longer represented in Parliament. The party folded in 1997, having played a leading role in Latvia’s recent history. Mission complete.