The cemetery is located in north-eastern Riga, 4.5 kilometers from the Old Town.

Two sites from the Soviet occupation following the Second World War are worth a visit at the Forest Cemetery:
1. The burial ground, “The White Crosses”, and
2. The gravesite of Janis Cakste, the first president of the newly
independent Latvia in 1922. 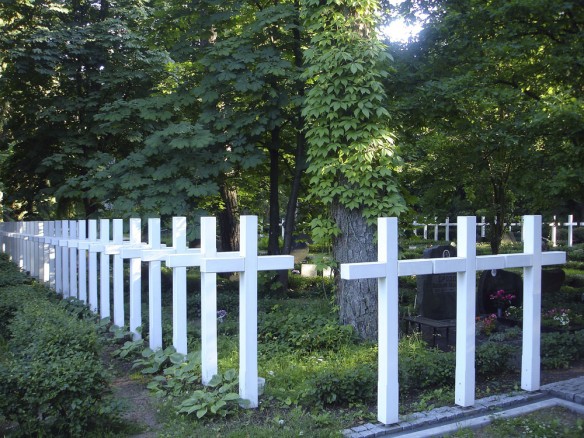 The burial ground, “The White Crosses”.
More than 120 people, tortured and killed in 1940-41 by the
Communist regime, were reburied here in 1941-1944. They were
originally buried in mass graves elsewhere. After the Soviet
occupation of 1944 the area was leveled. Later, new burials were
allowed on the area by the Communist regime in order to forget
the victims. After Latvia’s independence, it was decided not to
move the new graves but to establish a memorial site. The area
is today surrounded by white crosses to honor the victims of the
Communist regime from 1940-41. The gravesite of Jānis Čakste.
The grave of Jānis Čakste, the first president of the independent
Latvia in 1922, are located at the end of the long open area
stretching from the main entrance of the cemetery. The
Communist regime was against remembering Jānis Čakste. The
KGB therefore guarded the grave to hinder protest actions, for
example, on special memorial days related to the freedom of
Latvia. A militiaman can be seen on the right side of the photo.
A large gravesite and memorial for Vilis Lācis, president of the
Soviet Latvia, was erected in the middle of the long open area
to obstruct the view from the entrance to the gravesite of Jānis
Čakste. Vilis Lācis was the man who signed the instruction on the
deportations of Latvians in 1949.
Furthermore the Communists were also permitted to be buried in
the open area in front of the gravesite of Jānis Čakste.

The Forest Cemetery shows that even cemeteries did not escape Communist influence and activities. From all the Baltic countries and Finland, there are stories of Soviets destroying cemeteries, incorporating land used for other purposes and using gravestones as road material (A part of The Great Cemetery in Riga was turned into a park). A visit to the Forest Cemetery should also include The Brothers Cemetery located on adjoining land. This national monument is a burial ground for Latvian soldiers killed from 1915 to 1920 in the First World War and the Latvian War of Independence.