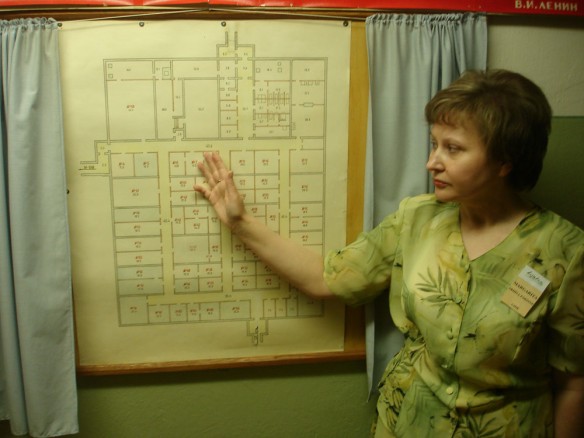 Plan of the bunker with 90 rooms connected with long corridors. A visit can only be arranged with guides. The entrance to the Rehabilitation Centre, under which the secret nuclear bunker is constructed. The centre arranges visits to the bunker.

Two helicopter landing sites outside the building are “camouflaged” as swimming pools and one separate landing site is made as a basketball field. It is possible to order a typical Soviet meal in the canteen (must be booked in advance). There were upgraded level offices for the three highest commanders in the bunker. Each had a desk with 2 phones to the other commanders, contact to listening devices in other rooms, an ordinary phone and a direct line to the Kremlin in Moscow. The KGB also had three special rooms in the building with a direct line to Moscow from where all instructions were expected. In the communications room, the philosophy is written in Russian on the wall: “Without communication there is no order. Without order there is no victory”. Which should be understood as: “Without communication with Moscow there are no orders from Moscow. Without orders from Moscow no orders will be delivered from the centre to the key Latvian administrative units and all main towns”.

75 kilometers east of Riga, a huge nuclear bunker was built under the “Ligatne” Rehabilitation Centre. The bunker was the shelter and command centre for the Latvian communist political and administrative leadership in the event of chemical or nuclear war. 250 people could survive in isolation in the bunker for 3 months. The nickname of the top-secret bunker among the communist nomenclature of the Soviet period was the “Pansionat” (Pension house).

THE ORIGINAL INTERIOR AND EQUIPMENT ARE PRESERVED

The bunker was planned in 1968 by the Latvian Central Soviet Committee but first became operational in 1982. The bunker is 2,000 sq. m. in size and is built 9 meters underground, of which 5 meters are made of steel and concrete plates and gamma ray protection from lead plate.

Nearly all necessary survival and communication equipment is preserved, such as:

Although the bunker seems to be well constructed, there are several planning gaps. What was to be done with dead bodies? There was no refrigeration or way of burying or destroying the bodies? And the “roof” would have had to be at least 15 meters thick to withstand a nearby nuclear blast. A neighboring missile base to hinder such an attack was never built.