The Freedom Monument. Located immediately east of the Old Town.

The Academy of Science. Akademijas Square 1.

The memorial “Eyes”. Zaķusala island in the Daugava River south of the Old Town.

Memorials to the days of the barricades. Jēkaba iela in Old Town.

Memorial to the murdered freedom defenders. In the north part of the park area immediately north of the Old Town.

Cattle wagon used for deportations. Memorial at Torņakalns train station located on the west bank of the Daugava River opposite the Old Town. 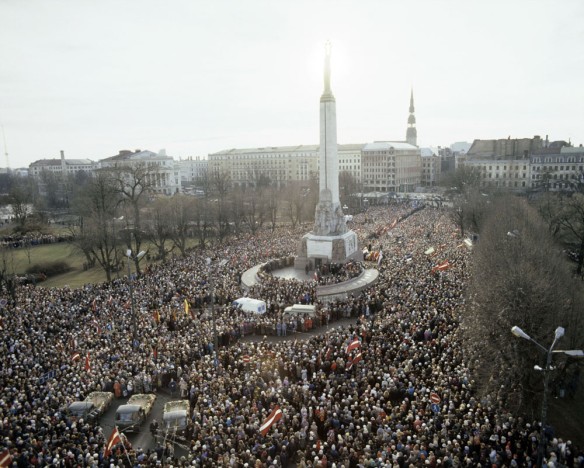 The Freedom Monument. A remembrance ceremony by the
Freedom Monument located immediately east of the Old Town.
The ceremony was held on January 25 to remember the freedom
defenders who were killed earlier that month.
The Freedom Monument was built in 1935 to honor the soldiers
killed in the Latvian War of Independence from 1918 to 1920. It is
an important Latvian symbol of freedom and independence.
The sculptures on the monument depict Latvian history and
culture. The woman on the top symbolizes Liberty and the
three stars the ethnical districts of Latvia: Vidzeme, Latgale and
Kurzeme.
During the Soviet occupation it was told that there were plans to
demolish the monument.
(Ilgvars Gradovskis) 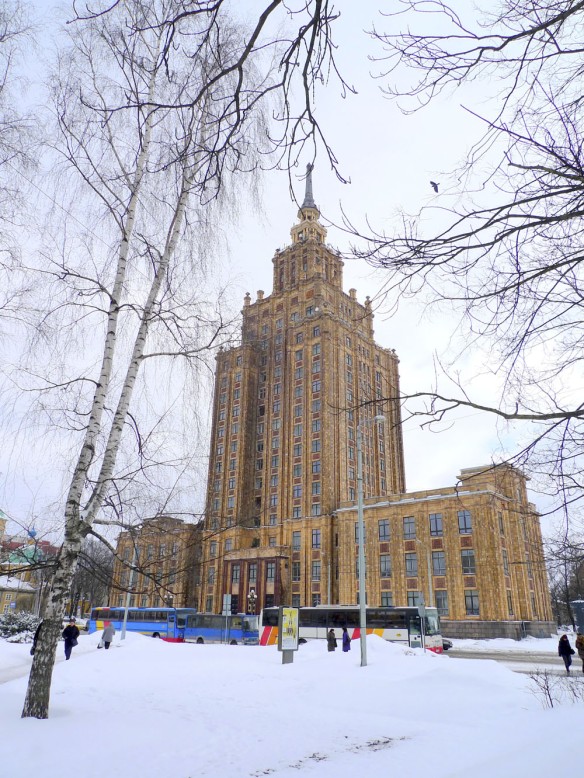 The Academy of Science. The 108-meter-tall building can be
seen from almost anywhere in Riga. Address: Akademijas Square
1. It was built between 1953 and 1956 and was officially noted as
“a gift from the workers and peasants of the other Soviet republics
to the Latvian people”. As far as we know, it was Latvia itself who
financed the gift. The building is similar to many other enormous
Soviet building complexes, for example in Warsaw and Moscow.
This style of building is known as Stalinist architecture, Stalin’s
Empire or Socialist Classicism. The building was decorated with
Communist and Latvian folk symbols. A giant portrait of Stalin was
planned as part of the facade. The memorial “Eyes” on the Zaķusala island in the Daugava River
south of the Old Town. In January 1991, Latvian people gathered
on the island to defend the TV House, which can be seen in the
background. Memorials to the days of the barricades. Memorials in Jēkaba
iela in Old Town. Grey concrete stones that were used to build
the barricades around all major public buildings in January 1991
when half a million people demonstrated in central Riga. In the
background can be seen a pyramidal memorial. 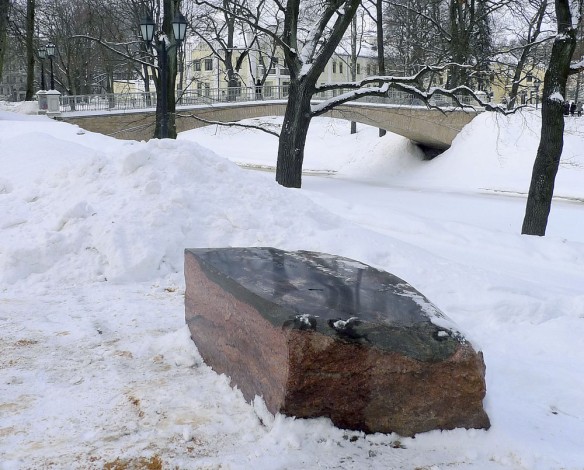 Memorial to the murdered freedom defenders. Memorial to
one of the five freedom defenders who were killed by the Soviet
military forces on January 20, 1991. The government asked the
Latvian people to defend key institutions in Riga as a result of
the Soviet leaders’ threats of a military intervention. The legallyelected
Latvian Parliament had declared the re-establishment of
independent Latvia in 1989, which meant that the country had left
the Soviet Union. Cattle wagon used for deportations. Memorial at Torņakalns
train station located on the west bank of the Daugava River
opposite the Old Town. This type of cattle wagon was used for
the deportation of more than 15,000 Latvians in 1941. They
were mostly the families of leading members of society in the
independent Latvia before the Soviet occupation of 1940.

There are several and different monuments and buildings in Riga that are related to Latvia’s most recent history. Some of these are described here.