Karosta is the name of the northern part of Liepaja and located north of the artificial canal leading to the former military port. A garage for submarines. This building in the former military
harbor can unfortunately not be visited but can only be viewed
from a distance. The Soviet base was specifically a submarine base
with 16 submarines and nuclear weapon deposits. 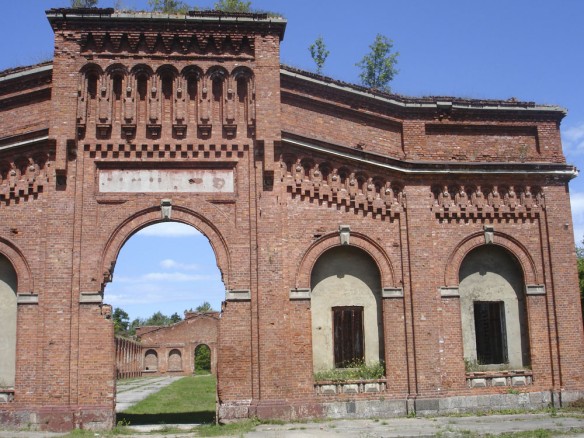 From Karosta. The characteristic old red brick buildings
date from the time of the Russian Empire. A few are restored but
unfortunately many are in a very bad state of repair. Here can be
seen the impressive remains of an indoor horse riding arena for
military exercises. From Karosta. In the background: the cathedral of
the Russian Orthodox Church consecrated in 1903 with the
participation of the Russian Tsar Nicholas II and his family.
During the Soviet period, it was used as a gym and cinema. In the
foreground: the departure of military personnel to Russia after
Latvia’s independence left many half-finished and empty concrete
apartment blocks. The number of inhabitants in Karosta fell from
25,000 to 6,000.

LIEPAJA. HOME TO NAVAL BASES SINCE THE 1890S

Liepaja is one of the few ice-free harbours in the Baltic Sea and therefore a home town for naval bases of both the Soviet Baltic Fleet and the Russian Empire, when it included Latvia. The city is today home to some 85,000 people.

During the Soviet Occupation, up to 30,000 of the inhabitants were Soviet military personnel and their families. This was one of the biggest naval bases in the Baltic Sea and the port was closed to all civil traffic in 1967. The town was a closed military city with very strict rules for permission to visit, even for people living just outside the town.

The northern part of the city, Karosta, occupies a third of the whole of Liepaja and is an outstanding urban environment from an historical and architectural point of view, especially in terms of its original Russian military architecture. The town was founded, together with the naval base, in the 1890s by Emperor Alexander III. Since then it has functioned as an autonomous community of military people with its own infrastructure, power station, water supplies, churches, schools etc. Not even the inhabitants from the older part of Liepaja were allowed to come here. A Soviet atmosphere still hangs over Karosta.