An der Wuhlheide 197, south-east of central Berlin.
Best public transport from central Berlin: S-Train to station Wuhlheide. Cross the S-train tracks by the footbridge. Go to the small miniature steam train station 50 meters from the end of the footbridge and follow the train tracks. You will then be led into the park. It is around 600-800 meters from the S-train to the central activity area, or around 15 minutes’ walk.
You can also take the miniature steam train from the S-train to the center of the park. See the timetable at www.parkeisenbahn.de.

Some activities have specific opening hours, such as the bathing lake, swimming pool, restaurants, cafeterias, etc. See the websites. 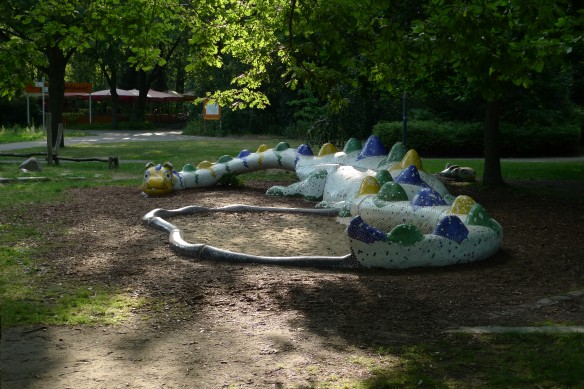 Relics from the DDR period. From a small playground opposite the former Pioneer Palace. 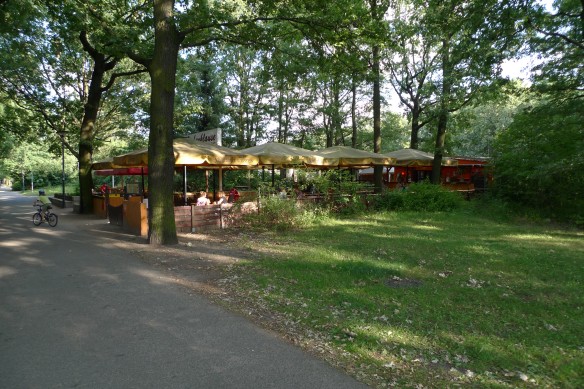 One of the small park restaurants. The central forest and marching road from Wuhlheide S-Train station to the central activity area.

A visit to the 120-hectare Wuhlheide Park is a relaxing day out for families with children visiting Berlin. It is also an interesting historical site.
The Wuhlheide Park was established as forest and parkland between 1919 and 1932, with some integrated recreational activities. In the DDR period following the Second World War, it was developed as an activity and educational area for the DDR’s youth organisation, the so-called “Pionierorganisation Ernst Thälmann”, named after a former chairman of the East German Communist Party, killed in a Nazi concentration camp.
The “Pionierorganisation Ernst Thälmann” was formed of youngsters from 6-14 years of age, and was linked to the “Free German Youth” (Freie Deutsche Jugend) pioneer organisation, which was for young people aged between 14 and 25. The pioneer organisation simply indoctrinated the young people to support and be members of the new communist society.
The first nationwide youth meeting of “Pionierorganisation Ernst Thälmann” was held in 1950 at Wuhlheide Park. Around 20,000 children attended the meeting. In the beginning, the park was known as the “Ernst Thälmann Pioneers’ Republic” but this later changed to “Pioneers’ Park”.

Today, Wuhlheide Park is a fully up-to-date forest and leisure area with many playgrounds, different sports areas, centers for nature, environment and ecology, a miniature steam train, indoor swimming pool and outdoor bathing lake, outdoor theatre and music halls , concert hall, space center, children’s museum, exhibitions, a model park of Berlin-Brandenburg (scale 1:25), restaurants, cafeterias, etc. See the websites on the left. Former military sites have been re-natured. The park is also on Berlin’s list of historic monuments.
The service organisation, FEZ-Berlin, describes itself thus on the website: “FEZ-Berlin is the largest non-profit center for children, youths and families in Europe. It offers creative games, fun and recreation and combines education, adventure and culture in its program. Its activities in the fields of global learning and education for sustainable development, European and international education as well as cultural education are unique. The expansive 100,000 square-meter outdoor area and the 13,000 square-meter indoor area make FEZ-Berlin an ideal location for a multitude of events and activities”.
The park is visited by 850,000 people each year.

A FEW INTERESTING RELICS FROM THE DDR

There are still many small yet interesting relics from the DDR period surviving despite the modernization of the park area and its buildings. Hopefully, the park administration will protect some of these historical relics for the future. Many of the smaller buildings are typical DDR buildings in their traditional colors. In the central area, there is a remarkable playground with mosaic sculptures. The road through the forest from the S-train station Wuhlheide to the central park area is laid out as a wide asphalt carriageway that was useful for marching large groups of young people down.