Watchtower at Erna-Berger-Straße. All buildings seen on the photo were built after the fall of the wall at the former “death strip”. 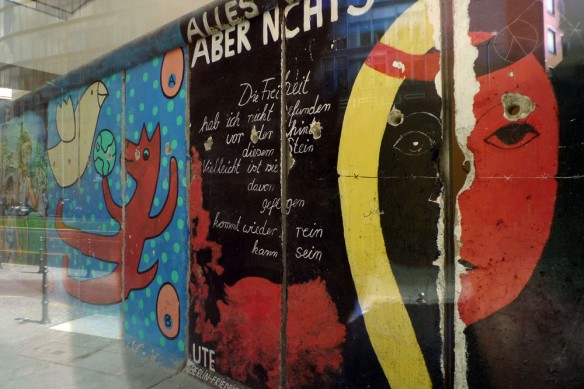 Reconstructed part of the Berlin Wall at its original location but now inside a new building. On the corner of Erna-Berger-Straße and Stresemannstrasse. It can be seen through the street windows of the building. A 300-meter-long protected part of the wall can be found at Niederkirchnerstrasse, a side road to Stresemannstarsse and only 300 meters Potsdamer Platz and Erna-Berger Strasse. In the foreground, an exhibition on the Nazi period arranged in the cellar ruins of the former Berlin headquarters of the Gestapo (the Nazi secret police), SS (part of the German army) and the central security service. It was in this area that most terror and murder was planned during the Nazi period, under the control of Nazi bigwigs such as Himmler, Heydrich and Kaltenbrunner. Opening of the Wall (Frits Wiarda)

The mushroom-shaped watchtower located at the end of Erna-Berger-Straße is one of the last of its kind. It is a panorama observation tower with an octagonal observation room on top. This kind of tower was introduced in 1969. Because of the narrow shaft, which made it difficult for border guards to turn out quickly, these kind of towers were later replaced by other kinds of watchtower.

The watchtower on Erna-Berger-Straße is listed as an historical monument.

A part of the wall can be seen in the open backyard area opposite the watchtower. There is no access to the backyard but the remains of the wall, approximately 5 meters in length, can be seen through the wire fence.