TOURS IN THE BERLIN UNDER- GROUND

Access to the underground is only possible on guided tours. Ticket office: A pavilion at the southern exit of the U8 station Gesundbrunnen, Brunnenstrasse 105. The office is open from 10 a.m. to 4 p.m. All the tours in foreign languages start in the entrance hall. Reservation is not possible and tickets may only be purchased on the day of the tour. About prices: See the website. Tel. +49-(0)30-49 91 05 17 E-mail info@berliner-unterwelten.de

The Berlin Underworld Association arranges several tours in the Berlin underground. See the website. Two of these tours are especially connected to the Cold War period: Tour 3 and Tour M. Tour 3 deals with Subways, Bunkers and the Cold War. Tours in English: all year, every day (except Monday) at 13:00 additionally on Tuesday at 11:00. Also tours in other languages. Tour M deals with the Berlin Wall. Tours in English: 1 April – 31 October and only Sundays at 10:30. Also tours in other languages. 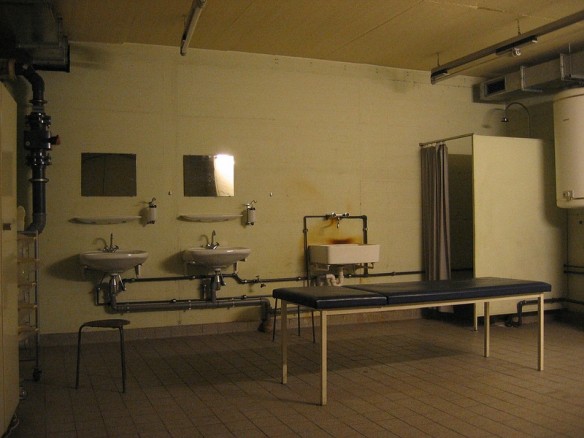 The Berlin Underworlds Association is a voluntary association founded in 1997. The association researches the historical development of the underground. One of the goals of association is to offer the public the possibility to have a broad look into Berlins underground: the sewerage, gas, water and electricity networks, the public transportation system and all kind of military and civile underground bunkers and installations. Two of the permanent underground tours arranged by the association are especially connected to the Cold War period. These tours are described below. Other tours can be found on the website.

This tour follows the traces of the Cold War in the underground. In West Berlin civil defence shelters were reactivated or newly built in preparation for a possible nuclear war. By explaining the practical preparations made to help people survive, this tour attempts to make the realities and horrors of such conflict easy to comprehend. On the tour we visit an air raid shelter from WW II that was renovated in the early 1980 s. Here, with the help of various objects and photos, we will deal with some related themes. Then, after a short ride to Pankstrasse station, we offer a glimpse into the workings of a ‘modern’ bunker, which was intended to protect people in case of a full-blown nuclear war. Here, we try to give you an idea what it could have been like, had World War Three broken out.

Tour M – Under the Berlin Wall

This tour gives you an insight into the history of the escape tunnels, and delves into the subject of the subterranean border – in the subway and sewer systems, which were used by those trying to flee the east. After a visit to various photo exhibitions in a former civil defence shelter, we travel via the subway to Bernauer Strasse. There more than seven escape tunnels were attempted within a distance of just 350 meters of each other. Here you will hear tales of betrayal in addition to the story of the two most successful tunnels.