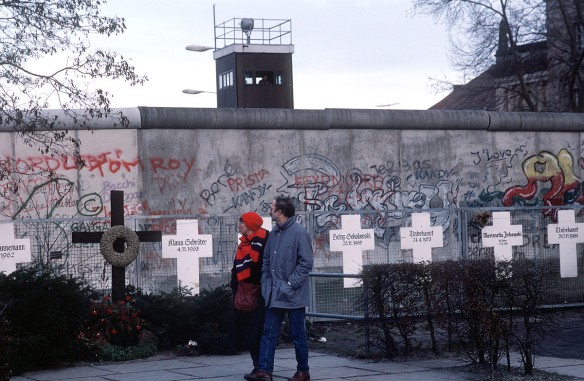 The former location of the white crosses with the Berlin Wall in the background, 1990. At the corner of Dorotheenstrasse and Wilhelmstrasse. The German Parliament. The crosses can be seen under the trees. At the corner of Dorotheenstrasse and Wilhelmstrasse. Memorial with historical photo from the site showing the parliament building in the background. The precise location of the Berlin Wall is plotted along the road in bright stones. The crosses on the bank of the River Spree. The crosses on the bank of the River Spree with the German Parliament.

MEMORIAL TO MURDERED FUGITIVES FROM THE DDR

The White Crosses is a memorial to some of the people who died at the Berlin Wall while trying to escape from East to West Germany during the Cold War period.
The crosses were originally established by a private group, the Berliners Association (Berliner Bürger-Verein).
The crosses on the bank of the River Spree were placed on a fence with the Berlin Wall in the background. The Wall followed the river bank at this point because the water itself belonged to East Germany. After the fall of the Wall, the memorial was temporarily moved to make way for the construction of new buildings along the river. The installation, now seven white crosses, returned to the riverbank in 2003.
These crosses have two names on each one, one on the landside and one on the riverside. The following people are mentioned on the crosses, together with the year of their death:
Günter Litfin, August 24, 1961.
Udo Düllick, October 5, 1961.
Hans Räwel, January 1, 1963.
Klaus Schröter, November 4, 1963.
Heinz Sokolowski, November 25, 1965.
Marienetta Jirkowsky, November 22, 1980.
Werner Probst, October 14, 1961.
Ingo Krüger, December 10, 1961.
Philipp Held, April 11, 1962.
Axel Hannemann, June 5, 1962.
Lutz Haberlandt, June 27, 1962.
Wolf-Olaf Muszinski, March, 1963.
Chris Gueffroy, February 5, 1989.
One cross mentions: ”Den unbekannten Opfern an der Mauer“ (which translates from German as “To the unknown victims of the Wall”).