www.mauerpark.info. Website of the organisation Friends of the Mauerpark.

A 300-meter-long section of the inner wall is preserved as a monument. The wall is located on the hill of the park next to the Friedrich-Ludwig-Jahn-Stadion. 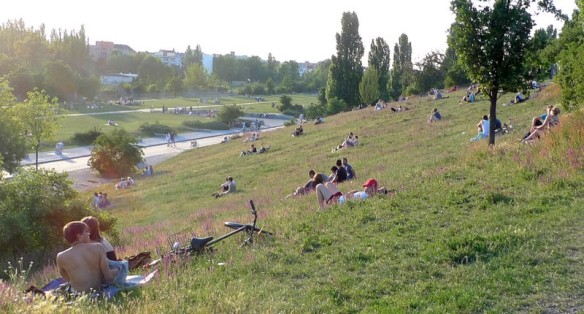 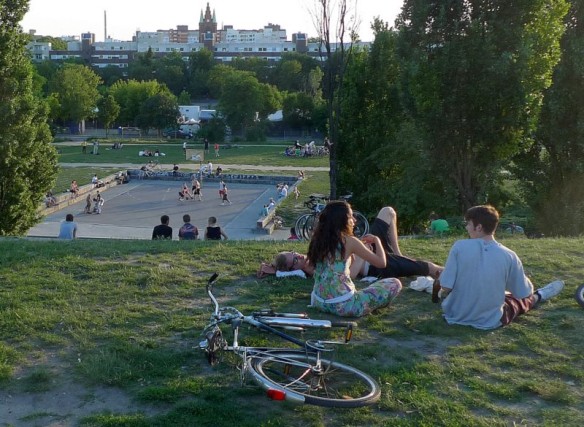 FROM DEATH STRIP TO A GREEN AND LIVING PARK AREA

The Mauerpark (The Wall Park) is a public park in Berlin’s Prenzlauer Berg district. It is located on part of the former heavily-guarded “death strip” or “no man’s land” between the two parallel concrete walls that formed the Berlin Wall.

The area was originally the location of the Old Nordbahnhof (Northern Railway Station), which connected Berlin to Stralsund and the Baltic Sea. The remains of the railroad tracks can still be seen in the area.

The site was a border area when Berlin was divided into occupation zones following the Second World War.

A 300-meter-long section of the inner wall has been preserved as a monument and an example of very attractive graffiti. The wall was unusually high at this point because of the many visitors to the neighboring stadium, home of the East Berlin football team, Dynamo Berlin.

After the collapse of the wall in 1989, the former “death strip” was turned into a large, green open space. Today it is one of the most popular park areas, especially among young Berliners, and an enjoyable place to play sport, listen to live music or have a pleasant lunch or dinner. Information regarding the site’s many events can be found at www.mauerpark.info, the website of the organisation Friends of the Mauerpark.