There are three different ways of reaching the airport grounds:

It is a 2 to 10 minute walk from all stations to the entrances.

All information on administration, development, events, activities etc. can be found here.

All kinds of guided tours related to history, culture and nature can be arranged in the former airport buildings and on the airfield. 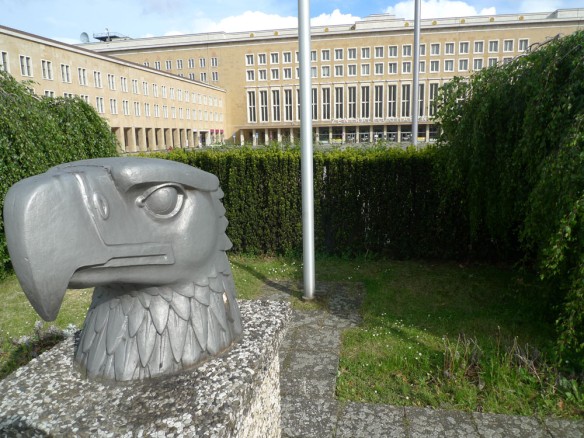 The German eagle in front of the former entrance hall. 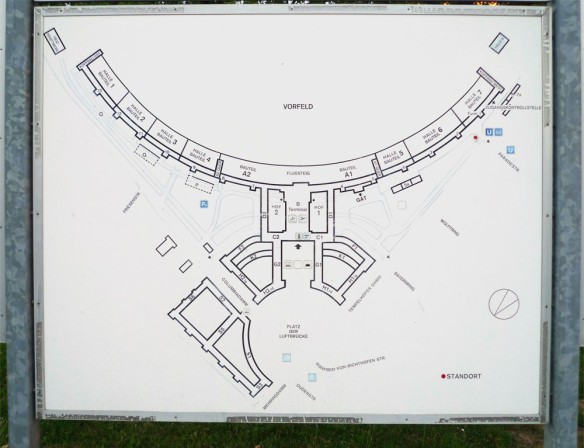 Plan of the airport building complex. 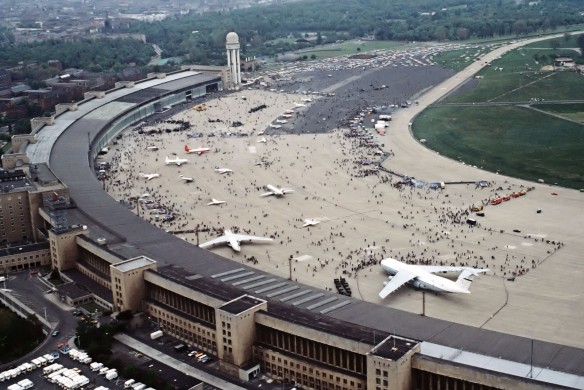 An aerial view of an open house being held at Tempelhof International Airport in 1984.
(TSGT Jose Lopez Jr., US Air Force). 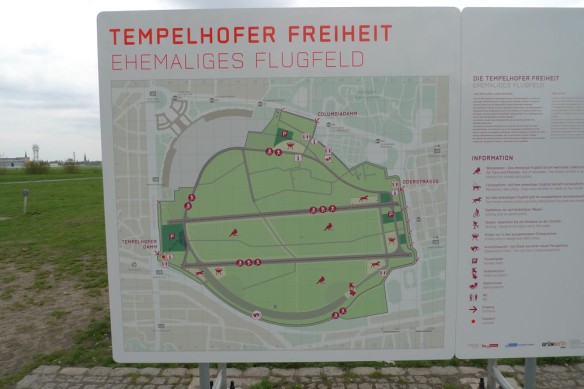 FROM CENTRAL AIRPORT TO CITY PARK

The existing 1.2 kilometer-long airport building was finished by the Nazis in 1941. It was one of Europe’s iconic airports from the pre-World War II period, also known as “the mother of all airports” because of its functional structure, built as a central hall with customs and other functions and the possibility of walking from the hall to the planes via “wing buildings” (and not, as previously, across the open airfield). The “wings” made it possible to park many flights close to the building and therefore close to the passengers, exactly as all airports are built today. Most of the building complex was formed of hangars. The main building was among the 20 largest buildings on earth.

Tempelhof Airport was closed in 2008 due to its location in the middle of a residential area with no room for expansion. The airport is primarily known for the 1948-49 Berlin Airlift, when West Berlin was blockaded by the Soviet authorities.

In August 2009, Berlin city officials announced that Tempelhof would be opened as a city park, also called Tempelhofer Freiheit (The Freedom of Tempelhof).

The new and larger airport building was part of the Nazi plan, which intended that Tempelhof should become the gateway to Europe and a symbol of Hitler’s “world capital”. The building complex was designed to resemble an eagle, with semicircular hangars forming the bird’s outspread wings. The hangar roof was to have been laid in tiers to form a stadium for spectators at air shows.

The German air force, the Luftwaffe, did not use the airport for air operations during the war. From 1940 to 1944, the hangars were used to assemble German aircraft, the so-called Junkers Ju 87 “Stuka” dive bombers and Focke-Wulf Fw 190 fighter planes. Aircraft parts were brought in from factories all over Berlin. The finished aircraft were flown out of the airfield.

Both the construction of the airport complex and assembly of the aircraft was managed by KZ-prisoners. The KZ-camp was located on the airfield, unsecured. After the Second World War, Tempelhof Airport became a part of the Western sector in a divided Berlin.

THE BERLIN BLOCKADE AND AIRLIFT

The Berlin Blockade (1948-49) was a land-based blockade of West Berlin as a Soviet protest against Western efforts to integrate their zones into West Germany, for example through the introduction of the Deutschmark and the founding of a common government for all Western Allied sectors. The roads through the Soviet zone from West Germany to Berlin were closed. The Allies responded with a massive airlift, known as the Berlin Airlift, which delivered supplies to the two million inhabitants of West Berlin. The right to use the flight routes was stated in the Allied agreement (which included Russia). More than 900 British and American aircraft brought supplies to the city by means of 200,000 operations that provided 13,000 tons of food daily. Transport aircraft would land every 90 seconds with goods. It was the biggest transport mission in history.

The success of the Airlift was humiliating to the Russians, who had claimed it would never work. The blockade was thus lifted one year after it commenced.

Today, Tempelhof Airport and the airfield have been developed as a surprisingly interesting and unusual public park. It is a very special experience to visit the airfield and see the many preserved relics from the airport period.

The park has already hosted a number of fairs and events as well as all kinds of cultural and sports activities.

It is remarkable that 80% of the former airfield has been designated as important habitats for several red-listed birds, plants and insects.